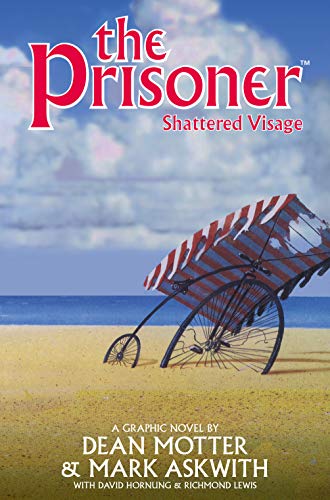 It’s déjà vu all over again! Remember Rover? The eerie, icky white latex ball/balloon that bursts from the sea to envelop escapees from the Village? Once Rover had the fleeing person encased, it would bound back to the Village, returning the Prisoner to posh confinement. Well. It’s baaack!

The Prisoner: Shattered Visage is stated by publisher Titan Comics to be the authorized sequel to The Prisoner TV show, which last aired in the US in 1968. It seems much more than that. To adapt the words of Winston Churchill, this graphic novel is a riddle wrapped in a mystery, inside an enigma, drizzled with hallucination inducing drugs.

A scurry into the fourth dimension known as the web suggests that the novel in hand has lived many lives. In 1998–99, the four chapters of the novel were released as individual comics by DC Comics. They were then released as a collected comic edition by DC Comics in 1990. But wait, there’s more. In 2000, Amazon reveals that The Prisoner: Shattered Image appeared as a DC Comics paperback.

The Titan version does appear to be a repeat of earlier works. The cover art for the 2000 and 2019 books are most similar. The 1990 and 2000 softcovers have a page count of 208, about the same as the current model. (The ISBN numbers are different.)

Now matters take a definite ride in Rover. Titan provided a top sheet for the 2019 softcover book. It states that the new book is a 112 page hardcover. The ISBN numbers for the 2019 soft and hardcovers are the same. The cover art for the top sheet is similar to but different than either the 2000 or 2019 volumes. Scattered about the internet are some frames from the 1990 and 2000 DC Comics editions. They are identical to frames contained in the 2019 Titan effort. One might conclude that the books are triplets separated at their different dates of birth.

Viewed with eyes of 2019, the suggested shortcomings in the novel overlook the basic nature of the original TV series. It was far from linear. It was an early sci-fi romp that relied mainly upon what were then hi-tech visuals. The plot largely lacked logic. Different actors switched in and out of the role of character Number 2. There was no understanding of what drove Rover or how it could actually operate. The end of the last TV episode was incomprehensible. The same creativity continues is Shattered Visage. No one should be dismayed.

Alice Drake is a retired secret agent, as was Number 6. She has an estranged husband and a lovely preteen daughter. She decides to take a holiday by sailing solo around the world. Her ship is wrecked in a storm. She is magically cast upon the same shore where Rover enjoys to romp. Guess what. She ends up in the Village.

The Village she experiences was once the forced residence of Number 6. Twenty years of abandonment have been visited upon the Village. But by creative script writing, the Village still has power and most systems work. Number 2 and Number 6 are still there, but have not encountered each other over the decades. With the arrival of Ms. Drake, now also dubbed Number 6, they are immediately inspired to beat each other to death.

Meanwhile, back in England bodies pile up for no reason seemingly related to the storyline involving Drake and her new friends in the Village. Her estranged husband joins a team assembled to rescue her, gathered solely upon the epiphany that she is in the Village.

Unanswered by the last page of the sequel is what the whole TV series and this novel were about.