Prince Albert: The Man Who Saved the Monarchy 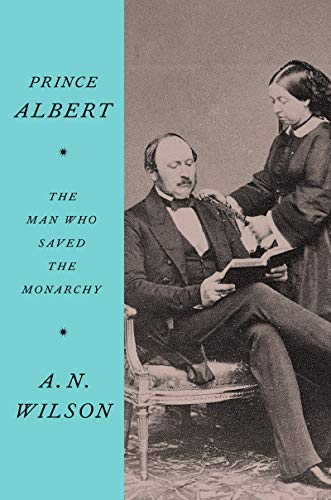 For more than six decades, Queen Victoria ruled over the British empire. Beside her for more than 20 of those years was her husband, Prince Albert. He lived only 42 years. Yet in that time, he fathered the royal dynasties of Germany, Russia, Spain, and Bulgaria. Through Victoria, Albert and her German advisers pioneered the idea of the modern constitutional monarchy.

In his new book, Prince Albert: The Man Who Saved the Monarchy, author A. N. Wilson describes Queen Victoria as the personification of her time, its values, and its contradictions. He portrays Prince Albert as one of Britain's leading promoters of its transformation as a vibrant and extraordinary center of political, technological, scientific, and intellectual advancement. Far more than just the product of his age, Wilson claims that Albert was one of its principal influencers, and to properly understand Britain during this time period would be impossible without considering Albert’s effect and influence.

Wilson is a prolific biographer and novelist who has won many literary awards and penned such books as Victoria: A Life (2015, Penguin) and The Queen: A Royal Celebration of the Life and Family of Queen Elizabeth II, on Her 90th Birthday (2017, Atlantic). He grew up in Staffordshire, England, and was educated at Rugby and New College, Oxford. A Fellow of the Royal Society of Literature, he holds a prominent position in the world of literature and journalism.

The life and times of Prince Albert have been minutely scrutinized in countless biographies. Some have been very well written and others not so well. What makes this one different from all the rest? It’s not really any different, and there aren’t any new earth-shattering tidbits of information. But what Wilson differentiates and excels at is his clear and concise explanation of why Albert is considered by many to be a major influencer of the modernization of British society, as well as the prince’s pivotal role in helping to restore integrity to the crown.

Wilson claims that despite Victoria’s unfailing and devoted love for her husband, she was not interested in giving up any power. To overcome his frustrations and limitations, Albert set the goal of modernizing the royal household. A shrewd and knowledgeable politician in his own right, he was also able to increase the influence of the monarchy by enrapturing members of both parties with his commonsense approach to issues of the day.

“Deeply engaged as he was, and would be, in European and British political issues, knowledgeable as he was, and would be about scientific and technological advance, widely read in contemporary literature, Prince Albert would be no mere observer of these developments. He was determined, from the moment he left Germany . . . that he should find a role for himself personally, and a role for the monarchy, in the new world which was dawning.”

On December 14, 1861, at Windsor Castle, Albert died from typhoid fever in the presence of Victoria and five of their nine children. Victoria never recovered from Albert's death. She withdrew from public life, and her seclusion eroded some of Albert's work’ such as introducing the principle that the British royal family should remain above politics. By the time of his death, Albert was an almost universally admired figure.

“Both Victoria and Albert were full-time busy public figures, steering the institution of monarchy into something which could be sustained in the era of universal suffrage and parliamentary government . . . two fallible beings, whose egos clashed, but who remained lovers to the end, and who were in every sense partners.”

In this comprehensive and well written biography, Wilson has aptly managed to differentiate himself from the well-trodden path of other noted biographers. His deeply moving, well researched, and fittingly appropriate tribute to the enduring legacy of Prince Albert does not disappoint and provides ample reading pleasure for anyone interested in examining British royal life in the 19th century.