Pretty Bitches: On Being Called Crazy, Angry, Bossy, Frumpy, Feisty, and All the Other Words That Are Used to Undermine Women 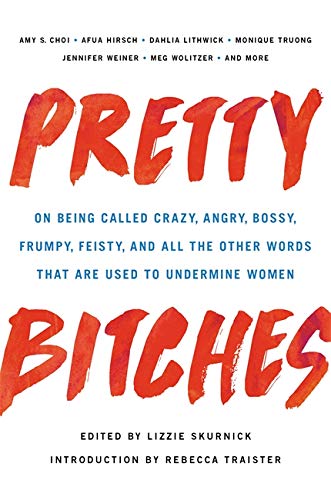 Pretty Bitches is an often-hilarious collection of essays by brilliant authors that blow asunder the real meaning of pet names and labels often given to vagina owners. This book calls for a Sundance film with vignettes from this sterling collection of essays. Memorable moments include:

Scene one by Carina Chocano: “The princess is the girl the patriarchy wants you to be. The girl with her life all mapped out for her, her interests narrowed, her sights trained squarely on herself. She’s the girl who sleepwalks through life, dreaming of being no one.”

Scene two by Glynnis Macnicol: “Once I stopped seeing men as permanent decisions they started to appear everywhere, multiply like gremlins (though mostly fun and easily contained).” In “Lucky” the raw nerves successful women experience over daring to achieve and still be the subject of diminishment are exposed to the light. Men aren’t termed lucky when they achieve, but rather successful, hardworking, brilliant. Macnicol acerbically opines that women are rewarded for staying put.

Flashbacks still haunt when Mary Pols asserts that one of Martha Mitchell’s kidnappers and a bodyguard during the Nixon Watergate burglary, Steve King, was leading the Wisconsin Republican party until appointed ambassador to the Czech Republic (artful Prague domicile) by Donald Trump. A convicted hostage taker was confirmed by the Republic Party to represent the nation as ambassador for a European country, because after all a husband kidnapping, drugging, and silencing his wife is something admired by the misogynists of the current administration. Yeah, Martha certainly was crazy to object to that treatment. Meanwhile, the entire media piled on, from David Letterman to prime-time news, denigrating courageous Martha and trying to institutionalize her for speaking out about Nixon. Makes me sad to think of what Ms. Mitchell could have achieved under a less hostile environment. Hoisting a cocktail in your honor, Martha, here’s mud in your eye and acid in those of your detractors.

Raquel D’Apice slays the nurturing myth for women about childbirth. “Not having a baby as in having a baby come out of your body, because I have done that twice, and heads up, it ranks somewhere between have a thirty-six-hour root canal and an anus full of bees.” Effortlessly she defines nurturing in a unitarian relatable way, as wanting people to become better people even if they have to do hard things. Exactly.

Tanzila Ahmed illustrates the choice between obvious intellect and singlehood as opposed to being “less intimidating” for potential male suitors. Mothers frequently advise their daughters of this dilemma, being too smart, too successful, too accomplished, and they have to tone it down for the men. Or mothers may have avoided the topic entirely, as if women could have any status at all without the approval of men.

Elizabeth Spires in “Aloof”: “In his view I was not a human with my own agency and history and personality; I was just a potential reflecting pool for him to evaluate his self-worth, as a woman, I was expected to be fawning, effervescent, possibly flirtatious, and definitely subordinate.” Women who refuse to fawn or ingratiate themselves on the penile class are termed aloof, cold, or difficult.

Finally, Katha Pollitt gives new meaning to feisty, which can be considered kind of a low-grade insult by someone with diminished vocabulary. Apparently, this word assigned to females descends from old English and means the farts of an old woman with a tiny, yapping lapdog.

This anthology cherry picks (no pun intended) and dissects the terms assigned to, for, and about women as a means of social control. As a bonus, there is the handy appendix at the back, so you can use the book as a reference when you explain encounters with your children, whether they be male or female. Not a laugh riot but an essential read, especially in the misogyny-r-us-era of Trump.