In the President's Secret Service: Behind the Scenes with Agents in the Line of Fire and the Presidents They Protect by Ronald Kessler (Aug 4 2009) 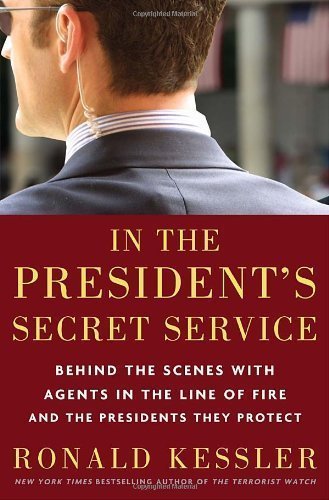 The people who serve in the United States Secret Service seem to live in an alternate universe. They stand erect, almost motionless and devoid of any facial expression. Their astringent demeanor is all that is necessary to broadcast their purpose for being who they are, why they are, where they are.

These are men and women who represent the most pure kind of service one could ever imagine: In any moment they would throw themselves in front of the President of the United States to stop a bullet, using themselves as human shields.

With a title like, In The President’s Secret Service, I expected to learn more about the men and women who choose to give their lives for our highest elected officials. As much as I would like to believe each and every agent is a paragon of virtue, I’m adult enough to know we are all mundane in many ways and lack the sustainability to never fall beneath wheel of the commonplace.

However, with all my adult wisdom, I was not prepared for what was waiting for me between the front and back cover of Kessler’s latest book. The latter part of the title, Behind the Scenes With Agents in the Line of Fire and the Presidents They Protect should have been rewritten to accurately describe what this book really is about: Behind the Scenes With Agents Gossiping About the Presidents They Protect.

There is little to admire here. Instead of casting an astute eye on what could have been remarkable insights into the decision making process of a Secret Service agent, we are offered page after page after page of adolescent gossip by dozens of former Secret Service agents who seem only too eager to snicker behind the backs of their former charges. And of course, we get a rerun of the all too well known shenanigans of presidential philandering.

Kessler begins his book with some truly interesting and worthwhile background on the beginnings of what we know as the Secret Service, starting with President Lincoln’s negligent bodyguard wandering off to get drunk, leaving the president unprotected. We all know how that went.

The historical information in Kessler’s book that is worthwhile reading. We are treated to a tale of would-be assassins during President Harry Truman’s term. Oscar Collazo and Griselio Torresola, two Puerto Rican nationalists looking to draw attention to the cause of separating from the United States, decided to go after Truman and raise awareness to their cause.

The hapless pair bought German pistols in New York, rode a train to Washington, D. C.,  and took a taxi to the White House. Collazo and Torresola learn, to their chagrin that President Truman was staying at Blair House across the street as the White House was undergoing renovations.

Kessler writes that the Nov. 1, 1950 shootout at Blair House was the biggest gunfight in Secret Service history.  As the story is told, twenty-seven shots had been fired in forty seconds, leaving Torresola and Collazo dead at the scene and Officer Coffelt dead four hours later at the hospital after surgery.

It’s too bad Kessler didn’t stay with more of these meaningful stories as he moved forward in history. Instead, his book dissipates into nothing more than unsubstantiated disparaging of past presidents and their families.

The disappointment extends beyond the author and his choice of subject matter. Without the willing contributors of the Secret Service agents who were on duty for Presidents Kennedy, Carter, Nixon, and Johnson, Kessler would not have had half of the aspersions he generously quotes from his interviewees.

It is impossible to know if what these agents said is true or where these stories really came from, because Kessler offers no source material or attribution anywhere. Another hard question is why these former Secret Service agents choose to go so public with dirty details they claim to have observed. There were several salacious remarks about President Lyndon Johnson made by Secret Service agents whom Kessler sometimes quotes directly and other times anonymously.

An example of this is a comment from a former agent assigned to President Johnson:  “I tapped on his bedroom door,” the former agent says. “Lady Bird said to come in.”  ‘He’s in the bathroom,’ she said. I tapped on the bathroom door . . . Johnson was sitting on the can. Toilet paper was everywhere. It was bizarre. If Johnson weren’t president, he’d be in an insane asylum,” former agent Richard Roth says he thought to himself when he was occasionally on Johnson’s detail.”

Kessler’s book is lacking any professional documentation for comments, opinions, or statements he puts forth as fact. His publisher, Random House, partners closely with the media company, NewsMax, where Kessler is on staff. This partnership could account for the reason why the book is lacking any sources or attribution.

In his acknowledgements, Kessler wrote, “The Secret Service agreed to cooperate on this book, the only book about the agency to receive such cooperation.” However, the cooperation did not extend to Kessler secretly procuring the Association’s entire directory. Without the Association’s acknowledgement or approval, Kessler called all former agents in the roster, according to Ike Hendershot, president of the Association of Former Agents of the U.S. Secret Service. Hendershot said Kessler abused their trust by going beyond the names made available to him. Unfortunately, he said, there was lack of professionalism on both sides of this project.

Yet, in keeping with the name of the organization, any chastisement has been kept “in-house.”

Whether it would have made a difference is hard to know. One wonders, though, about Kessler’s approach to saving the Secret Service from calamity, as he says in his book at the end of the acknowledgements. Did it occur to him that by airing all this dirty laundry from these former agents that it might cause current and future presidents to be less trusting of the agents guarding them now?

However, a subject as important as the behavior, reactions, and motives of the Secret Service are very serious. Placing agents in situations, after the fact or not, requires serious research as these events are recorded forever. In that regard, Kessler’s account of Sara Jane Moore and her assassination attempt on Gerald Ford is completely and totally without fact.

On Page 50 of Kessler’s book, he wrote that Oliver Sipple, a disabled former U.S. Marine and Vietnam veteran pushed Sara Jane Moore’s arm as she aimed her gun and shot at President Ford. He also wrote that the bullet flew several feet over the president’s head and Secret Service agents Ron Pontius and Jack Merchant pushed Moore to the sidewalk and arrested her.

Sipple did grab Moore’s arm, but not until after she got off her first shot, which missed Ford’s head by only six inches. Sara Jane’s own gun had been confiscated the day before, and she bought the .38 she used that day the same morning not knowing the sight was off.1.

As the crowd gathered to see Ford, no one was looking at Sara Jane Moore. As President Ford emerged, he stood still for a moment deciding whether to cross the street so that he could shake hands with people lined up on the north side of the street.2

After her first shot, people realized something had happened and Sipple, being a Marine and a hero, lunged at Moore and fouled a second, potentially deadly, shot.

Another factual error in Kessler’s account refers to Agents Pontius and Merchant. Kessler said they tackled Moore to the sidewalk and arrested her.

Agent’s Pontius and Merchant were assigned to guard Pres. Ford and were standing with Ford across the street from Moore. They did not leave Ford’s side. In fact, they grabbed the president and pushed him into the limousine and sped away.3.

SFPD Officer Tim Hettrich is the law enforcement officer who subdued Moore. Hettrich was assigned to crowd detail and was stationed on the sidewalk near Moore. Hettrich pulled the gun from her and handed it over to Secret Service agent Dotson Reeves, who grabbed Moore from the sidewalk.4.

Kessler’s book may be interesting to some, and there are passages that appear to be accurate in the historical sense. As for the remarks in quotations and editorial comments that lack attribution, it will be up to the reader to decide if this book is worth the time to read or to accept as what it is: unsubstantiated entertainment.

Geri Spieler is author of Taking Aim At The President: The Remarkable Story of the Woman Who Shot at Gerald Ford (Palgrave Macmillan). She is currently at work on her second book. www.gerispieler.com.