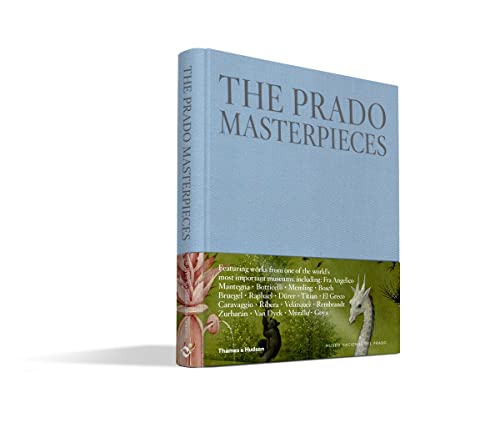 “The Prado Masterpieces is an incredible book, marrying visual splendor with academic insight.”

How can the infinite be contained? How can a museum embody the cultural character of a nation? Among the numerous top-tier museums, the Prado keeps prestigious company with the Metropolitan Museum of Art in New York City and the Louvre in Paris. It is the repository of masterpieces numbering in the thousands. Thames & Hudson has produced a monumental book for a monumental museum. The Prado Masterpieces, by The Museo Nacional de Prado, catalogs the holdings of this world-class museum from the earliest Greek and Roman artifacts down to paintings foreshadowing European Modernism.

Founded in 1819 following the grisly aftermath of Napoleon’s Peninsular War, it came to symbolize what it meant to be Spanish. Like the Alhambra and El Escorial, the Prado came to represent and glorify Spanish culture. But the Prado’s collection practices differ radically from those of the Met and the Louvre. The latter two museums contain encyclopedic collections, whereas the Prado reflects what the Spanish monarchs collected. Spain’s vast global colonial empire and its territorial possessions in the Netherlands, Austria, and Italy meant the Prado held a multitude of artistic masterpieces. A major shift occurs when the Spanish monarchy switches from the Hapsburg dynasty to the Bourbon dynasty. Royal patronage transitions from favoring Dutch and Austrian artists to French artists.

Accompanying the gorgeous reproductions is a well-researched text. Divided into chapters focusing both on general eras and specific artists, it is easily understood and avoids jargon-laden excesses. Among the numerous paintings, one stands out in its presentation. Because the Netherlands used to be a Spanish possession, the Prado holds a large collection of paintings by Hieronymus Bosch.

The oversize format makes magnifies his canvases crowded with people, monsters, saints, and demons. Well-known works like “The Garden of Earthly Delights” and “The Last Judgment” were originally triptychs installed in church altars. The Prado reproduces them as fold-outs, recreating the mechanics of visual revelation for devout congregants. As the Prado explains, “Philip II understood this intellectual dimension and acquired as many of Bosch’s works as he could.” (The Prado Masterpieces designates The Museo Nacional de Prado as the author and this reviewer will treat the Prado as if it were a single author. In reality the text is probably the synthesis of the museum’s curatorial staff.)

Masterpieces features artists both famous and obscure, including: Fra Angelico, Mantegna, Botticelli, Memling, Bosch, Bruegel, Dürer, Titian, El Greco, Caravaggio, Ribera, Velázquez, Rembrandt, Zurbarán, Van Dyck, Murillo, and Goya. The advances in photography and printing have created a publishing opportunity for fine art coffee table books. Gone are the days of blurry, muddy photos. Each photographic reproduction of a painting or sculpture is large, high quality and visually crisp. The scale is large enough for examination of individual brush-strokes. “The Adoration of the Magi” by Juan Bautista Maíno pops with bright colors and physical realism. Even though it was painted between 1612 and 1614, it seems near photographic in quality.

The Prado Masterpieces is an incredible book, marrying visual splendor with academic insight. Thames & Hudson has manufactured an heirloom-quality object. The large format brings out the best in the paintings represented here. This is a book to read, to look at, and to savor.