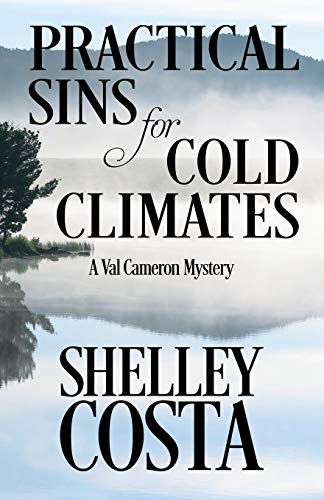 “Practical Sins for Cold Climates is an unusual and refreshing take on the 'transformed by the wilderness' theme.”

This title takes some thinking about. After reading the book, you get it, but until then it’s just an intriguing lead into an intriguing story.

There’s a subgenre of mysteries set either in or at the edge of wilderness, where the elements are a co-antagonist with the killer. This novel belongs in that subgenre.

It doesn’t seem so at first; in most wilderness adventures the protagonist either lives or works in the environment, or both, and uses it for advantage when the going gets tough. In this case the heroine, Val Cameron, is a city girl sent into the wilds by her boss to deliver a book contract to a best-selling recluse, and she has no idea what she’s walking into.

In no time she is up to her armpits in nature: water, trees, wildlife, muck, isolation, and having to get around by canoe, outboard, and float plane, or else on foot. Very un-metro, and she loathes it. Every minute she’s counting down to when she can escape back to her urban comforts and simplicity. But she is “condemned to another day in somebody else’s paradise.”

While coping with all that gets thrown at her, she stumbles across a two-year-old murder mystery. The Canadian lake community she’s thrust into is aboil with conflicting interests—landowners vs. corporations, people retiring to live in the pristine wilderness vs. the need for locals to develop it in order to make a living, a dying summer camp vs. its sabotaged reputation—among a very small, very intimate population that has been cross-pollinating for generations.

At every step it seems to Val that she plants her foot into somebody’s legacy of trouble. Meanwhile, the author she is chasing down keeps slipping away. And if he proves to be involved in the murder, that lucrative contract she’s ferrying to him might as well be confetti.

Her outsider viewpoint and her career as a book editor allow her to see a broader range of possibilities than the folks in the middle of the melodramas. Thus she connects dots between her New York City publisher and the faraway murder that has resisted solving by the people who should know better. It drives her to the edge of peril and forces her to draw upon resources she didn’t know she has.

Readers who have lived in both urban and rural environments may find some of Val’s observations to be hilarious. These might not be appreciated, or will pass unnoticed, by readers who only know one or the other extreme.

Regardless, the author has mastered the art of smooth writing and selecting the right details to set the scene and mood of a story. (“A boat the kind of white you only ever see in rich people’s teeth.”) She folds in backstory at just the right pace and handles suspense the same way. All quietly, albeit nervously, builds to a climax, and the murderer remains un-obvious until almost the end.

Overall, Practical Sins for Cold Climates is an unusual and refreshing take on the “transformed by the wilderness” theme.