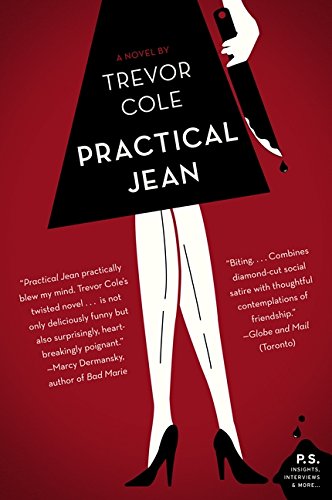 “Delightfully entertaining with a killing sense of humor, Practical Jean: A Novel is worthy contender for Book of The Year. You’ll love it to death.”

One line from the prologue in Trevor Cole’s comical Practical Jean: A Novel is the perfect synopsis for the entire storyline: “And here in Kotemee, all anyone can now say is, Thank God I was never a good friend of Jean Vale Horemarsh.”

Jean Vale Horemarsh, the seemingly inoffensive protagonist in Practical Jean: A Novel is content (for the most part) with the small town life she’s built: a semi-successful career as a ceramics artist, a close collection of women friends, a comfortable marriage with Milt, a kind but totally run-of-the-mill man for whom the word boring was invented.

For the last three months she has had to watch her mother go through the final devastating stages of cancer. When her mother finally succumbs to the deadly disease, Jean regrets that she didn’t suffocate her, saving the dying woman a lot of unnecessary suffering. Callous or courageous?

It is while having these tormenting thoughts, Jean has what she believes to be a true calling. As she says to Milt, “You think about a lot of things when you’re taking care of your dying mother.”

With these thoughts still dancing in her head, back at the store where she sells her ceramics, Jean sees two old ladies, “their limbs were stiff and sore, their eyes were weak, their skin had gone papery and lax, the internal systems of their bodies were no longer reliable.” That sight finally brings the revelation that she is on this earth for a reason, and that reason is to see that none of her friends should suffer when Old Age comes knocking wobbly at the door. Her own brand of preventive medicine will have to be applied speedily, if she is to succeed, and if that means carrying the Grim Reaper’s bloody scythe, then so be it.

In Jean’s new world of absolute compassion and euthanasia, no one should have to suffer the indignities of aging and illness like her mother did—and she, the great and humane Jean Vale Horemarsh, will take it upon herself to give each of her loving friends one final, perfect moment . . . and then, one by one, kill them.

True love has never been so clear, yet paradoxically dark. Beautifully simple. Unfortunately, as we are all too well aware, nothing in life is simple, especially death. In another revealing scene from the book, Jean, shortly after the funeral of her mother, is clearing out the fridge:

“In the kitchen of her sun-warmed house on Edgeworth Street, Jean bent to the task of removing each of these abominations. The jam jar was tossed into the recycling bin. The putrid liquids were dumped into the sink. The zucchini, cucumber, and mushrooms became compost. The mould-stiffened sour cream would not budge from its tub, so Jean scooped it out with her hand. Anything suspect—a bit of improperly wrapped steak, a bottle of cloudy dressing—was presumed tainted and excised without mercy from the innards of the fridge.

“It was three o’clock in the afternoon and Jean still wore the black jacquard dress she’d worn to her mother’s funeral. She had not found the will to take it off, although she had undone several of the buttons. So as she worked, erasing the evidence of time, destroying all signs of decay, her dress hung open slightly, exposing the skin of her back to the refrigerated air.

“Watching her from a corner of the kitchen, Milt, Jean’s husband, confessed that he should have cleaned out the fridge weeks ago, while Jean was still at her mother’s.

“But it was a revolting chore, he said, and he kept putting it off; he didn’t know how she did it.

Understatement of the year.

Practical Jean: A Novel is more than just a hilarious modern-day Arsenic and Old Lace or the TV’s “Dexter” in a dress. It’s a shrewd observation of the psyche going badly wrong, making good people colorblind, and forcing them to see everything in black and white while ignoring the dangerous gray.