Powers of Darkness: The Lost Version of Dracula 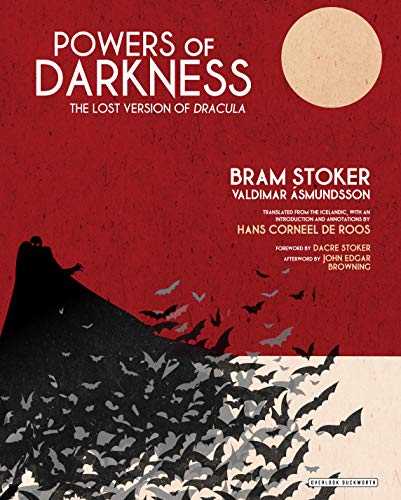 “There are mysteries men can only guess at, which age by age they may solve only in part.”

Is there any reader of Gothic tales who isn’t familiar with the plot of Dracula by Bram Stoker, even if he hasn’t read the actual novel?

Since its publication in 1897, the story of a vampire invading London and the efforts of a small group to stop him, has been played out in countless novels, movies, and television episodes. Though now somewhat dated, it is often considered the quintessential paranormal tale, the hallmark by which other novels in this genre are measured.

The announcement that a copy of Stoker’s novel translated into Icelandic was considered by some in the publishing world to be the “literary event of the season.”

Why Icelandic? one may ask.

The reasons are given in a lengthy Foreword by Dacre Stoker, the author’s great-grandnephew. Further explanations reside in the Introduction by editor Hans C. de Roos, with detailed illustrations of the floor plan of Castle Dracula described in the story and annotations in each chapter, as well as facsimiles of some of Stoker’s notes. There is also an Afterword by horror scholar John Edgar Browning, as well as an impressive list of Acknowledgements and References. Thus every aspect of inception, discovery, and aftereffect of this “lost” manuscript are covered.

Powers of Darkness—or Makt Myrkranna, its Icelandic title—differs vastly from the original Dracula, in that the majority of the novel centers around Jonathan Harker’s experiences in Castle Dracula, while the vampire’s subsequent flight back to Transylvania and his destruction there are missing. Indeed, 228 of its 289 pages deal with that part of the story.

Not only Harker’s name but others are changed as well; characters who die in the original survive, while others—notably the zöophagic Renfield—are completely deleted and new ones added.

It is suggested, in fact, that this version of the story is based on the original first draft of Dracula, given to Vladimar Ásmundsson by Stoker himself, before its revision and English publication.

Whatever the reasons for the additions and deletions, and the concentration on what is in the published version only a part of the story, Powers of Darkness is definitely an interesting concept. In fact, it is another novel altogether, as one having read the original at least four times, can testify.

Dracula’s reasons for leaving his own country were given as the fact that his depredations had depleted the countryside of the nourishment he needed to sustain his existence. London, with its teeming population offered new hunting grounds. The Count of Powers of Darkness has more ambitious reasons: political aspirations of a conquering nature, as well as domination of the living through magic and human sacrifice . . . facets anticipating many a future Dracula film.

The term “vampire” is used only once by Harker himself. As the narrator of most of the story, the young man constantly shies away from admitting what his host is, though he does declare him a fiend and a threat to mankind.

Powers of Darkness is an entertaining story and during the reading, it is easy to forget what it’s supposed to be—a translation—and think of it as an entirely new novel altogether.

If there are any detractions in this edition, it is the many annotations dealing with translations of Icelandic words. The explanations don’t so much aid the narration as confuse it.

The other fault lies in its ending. Where the original Dracula is dispatched in a description covering seven paragraphs, the chapter in this version consists of only two pages, the actual destruction taking place in six sentences. The Epilogue ties everything up neatly with startling brevity before the reader realizes the tale is finished.

All in all, while Powers of Darkness adds new depth to Harker’s visit to the castle and gives the Count a more far-reaching reason for his excursion to England, as well as characterization, the conclusion of the story, and its climax are very disappointing. Most readers may undoubtedly prefer the original.

To quote from the original: “There are mysteries men can only guess at, which age by age they may solve only in part.”

Powers of Darkness does exactly that, while offering new mysteries in their places.