Poulenc: The Life in the Songs 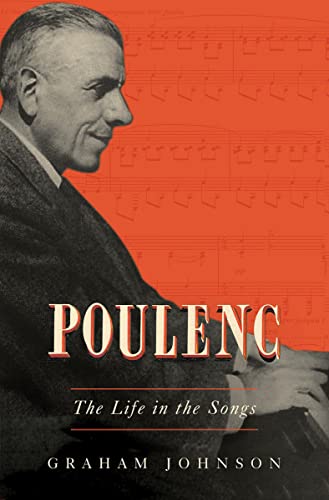 French composer Francis Poulenc was one of the famed vanguard composers of Les Six and a bon vivant who enjoyed celebrity but privately suffered bouts of depression and self-doubt, all of which informed his compositions. Johnson examines the complexities of his life vis-a-vis his music in Poulenc: The Life in the Songs.

Poulenc was born in 1899, the son of wealthy parents and grew up on an estate outside of Paris. He showed early promise as a pianist and composer, first noticed by the legendary music teacher Nadia Boulanger.

But his advantages did not shield him from personal tragedy, including the trauma of the death of both his parents when he was still an adolescent. He literally soldiered on and at 17, was conscripted to French infantry toward the end of World War I. In his early 20s, at the beginning of his professional career, his right hand was crushed in a rail accident, affecting not only his playing, but his composing as well.

Nothing stopped his creative energy and lust for an accomplished career in music. He spent most of his inheritance early on, and eventually the rest of his family estate during the global depression after the markets crashed. He continued to struggle financially throughout his career and hustled for commissions to stay afloat.

But despite setbacks Poulenc thrived musically as one of Les Six, and was admired by colleagues—Georges Auric, Louis Durey, Arthur Honegger, Darius Milhaud, and Germaine Tailleferre. Poulenc reputedly was the only homosexual, and it was an open secret. But Poulenc himself was very guarded and otherwise furtive about his same-sex trysts and affairs. Meanwhile, many colleagues already assumed that he and his concert partner, baritone Pierre Bernac, were a couple over several decades, but Johnson corrects that myth. Bernac and Poulenc, as Johnson reports in detail, were intimate, platonic friends.

Poulenc was popular for both his songs and scoring music to works of French poets. He would prove equally admired for his orchestral works, chamber music, and ballet scores including Les Biches and Aubade for choreographer Bronislava Nijinska and Diaghilev’s Ballets Russes.

He also collaborated with leading artists of the era including poet Jean Cocteau and poet Guillaume Apollinaire. He composed many operas considered modern masterpieces including L’masque Ball, Dialogues of the Carmelites, and Le Voix Humaine, with a libretto by Cocteau and composed for Maria Callas.

In his 30s Poulenc returned to the Catholic Church, to resolve his increasing guilt over being gay, that eventually caused him to want to conform to a heterosexual life, going so far as to propose to Raymonde Linossier, a lifelong friend, who refused him because she knew the truth.

Paris was tolerant of gay artists, but homophobia was still pervasive, particularly when it was considered unpatriotic not to have a family with children.

Poulenc’s longest relationship was with Raymond Destouches, a chauffeur he met in the 30s who had a socially connected clientele. Meanwhile, he had several other intense affairs with men. In 1954, while he was composing Dialogue of the Carmelites, he was engaged in such a tumultuous relationship with Lucien Roubert, a married traveling salesman, that when they split (temporarily), he had a nervous breakdown, collapsed onstage, and had to be hospitalized.

At 60, he had a five-year relationship with 29-year-old Louis Gautier, an infantry sergeant who built Poulenc’s country house in the 1957, where they lived together, hidden from the world.

Poulenc was furtive to the point of keeping the fact that he had a daughter secret, which was only revealed at the time of his death because he left everything he had to her in his will.

Johnson opens each section as a chronology of events in the composer’s life, decade by decade, encapsulating key moments and also historic moments in political events in Europe. These lengthy sections are followed by forensic detailing of Poulenc’s songs, the lyrics of which are printed side-by-side in French and English by translator Jeremy Sams.

Johnson is a pianist/composer in his own right and his analysis is a trove for musicologists, but readers used to more conventional writing may find the granular details give the book a difficult structure. But with straightforward biographical chapters, Johnson engages in a chatty, vigorous style highlighted with cameo portraits of such luminaries as Benjamin Britten, Erik Satie, Maurice Ravel, Jean Cocteau, Max Jacob, Serge Diaghilev, and intoxicating backdrops in Paris, London, and concert stages around the world.