Pops: A Life of Louis Armstrong 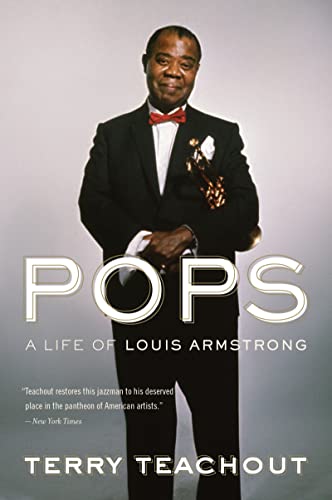 “He is the beginning and the end of music in America.”
—Bing Crosby on Louis Armstrong

Pops: A Life of Louis Armstrong by Terry Teachout makes for very good reading, at least for most of its almost 400 pages (475 with source notes and index). As a young person learning the cornet and trumpet, this reviewer was well aware that Armstrong was considered the greatest horn player of all time, but not sure quite why. Teachout makes a very good case for Armstrong’s being the person who did so much to give birth to, and advance, jazz in America. “You can’t imagine such energy, such musical fireworks as (the young) Louis Armstrong . . . [he was] the greatest jazz musician of the twentieth century.”

The tale of Armstrong’s growing up as a poor boy in a one-room shack, sent to reform school, and then joining the Colored Waif’s Brass Band of New Orleans is an entertaining one. Armstrong never knew his father, so he tended to make father figures of his band instructors and bandleaders. In Pops—the word Armstrong used to describe himself—Armstrong proves to be a seminal figure in jazz, and this is where the book is a bit like watching a Ken Burns documentary. So far, so good. . . ."

As with Sugar Ray Robinson in the recent biography The Sweet Science, we have two young men who grew up in extreme poverty (one in The Bronx, the other in New Orleans) yet overcame their circumstances to become favorites in their world. The stories of both Robinson and Armstrong are cinematic in nature. Yet the Robinson in Science comes off as a multi-dimensional character in a way that Armstrong never does in Pops. True, Teachout is quite fair in showing the reader that Armstrong had his flaws as a man and human being—he was married and divorced too often; he liked his musicians to smoke pot before recording—but we never quite understand why Armstrong loved music the way he did. We get very nice quotations, such as “Music became his reason for living. . . .” but no real depth.

" In Pops we also learn that Armstrong was self-taught and thus had very poor form as a horn player. Despite this, he was amazingly talented and naturally gifted; but we never learn or even read a guess ventured as to where his talents came from. Were they hereditary, or was he just an anomaly?

"What is interesting, at the back portion of this biography, is to learn about how many years passed between Armstrong’s recording of the song “It’s A Wonderful World”—an initial flop that languished in sales—and its popularity once it was included in the soundtrack of “Good Morning, Vietnam.” Quite fascinating, as is a great deal of Pops. Still, the subject seemed just a bit out of Teachout’s reach. Apparently the great Satchmo remains larger than life as well as the printed word.

"Now, who has the courage to attempt to write the definitive biography of Miles Davis? Anyone?