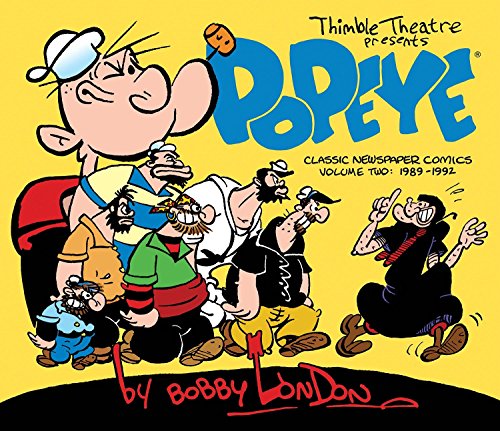 “Neither Shakespeare nor Faulkner could have ever said it better.”

For a couple of years in the late eighties and early nineties Popeye was one of the most wildly entertaining and socially observant comic strips to ever appear in an American newspaper.

Once again Popeye was filled with life. The strip moved rapidly across the American landscape through a series of stories that were infused with speed, energy, and rapid-fire references on the level of the late Robin Williams at his absolute best.

The second and final volume in artist and writer Bobby London’s six-year run on the daily Popeye comic strip, Popeye: The Classic Newspaper Comics by Bobby London Volume Two: 1989–1992 showcases the last three years of his brilliant stewardship of the strip.

The volume also holds one of the most sought after storylines in the history of the medium. For as much as Mr. London’s take on Popeye filled the iconic character with a rich life, the incredible inventiveness that he brought to the strip ultimately cost him his job.

This collection makes available for the very first time the complete run of strips that resulted in his removal from the strip. The interruption was so important that the New York Daily News used their entire front page to cover the battle. Featuring Popeye squaring off against Olive Oyl the headline screamed “OYL CRISIS.”

With the cooperation of both King Features Syndicate and Mr. London, The Library of American Comics and Editor Dean Mullaney have assembled a volume that not entertains and speaks of history, but is actually history itself.

Where Popeye’s creator, E. C. Segar had infused his one-eyed sailor with powerful fist and a willingness to use those fists at the drop of a hat, Mr. London made his Popeye a man of words and sarcastic asides and observations.

With the appearance of Popeye in January, 1929 the strip Thimble Theater slipped into a world where the realities of the Depression were covered in a more absurd manner and violence was part of the landscape. The early Popeye was such a brawler that William Randolph Hearst himself asked Segar to take it down a notch.

Make no mistake about it, the fists and the action were still there when Mr. London needed them. In one memorable four page run Popeye takes down some leather-clad skinheads by swinging one of them straight into the others as he says “There ain’t no room for prejudisk in Sweethaven!”

Bobby London wasn’t just the artist and writer, he was a life-long fan of comic strips. His version mixed adventure, comic strip history, social commentary, and wonderfully silly insights into human behavior into a wild stew that weaved through larger stories which could span up to six months at a time.

Which is one of the qualities that makes Popeye: The Classic Newspaper Comics by Bobby London Volume Two: 1989–1992 such a great read. For as the gags fly by at light speed readers are quickly drawn into the adventures that build gradually until they eventually resolve in a delightfully unexpected climax.

The art demonstrates Mr. London’s deep grasp of comic history. When Popeye leaves Clover County he enters a desert landscape that, to a knowing fan, looks an awful lot like Coconino County, the home of Krazy Kat.

When a biker gang passes a guard at the Mexican border (7-27-89) the guard is drawn in such a way that you would swear he belongs in the court of Otto Slogow’s Little King. In the next day’s strip there is a stuffed version of Opus from Bloom County sitting on the unmade bed of a Sutra Oyl.

Building on the version of Sweethaven (the town where Popeye and his gang live) brought to life by Mr. Segar and continuing with Bud Sagendorf’s work after Mr. Segar’s passing, Mr. London’s version of Popeye also features one of the rare African-American characters in comic strips, Ironhead Fred and his family.

When Popeye asks Ironhead if a gang of bikers have slipped through his part of town the giant replies as his wife look son with a knowing smirk, “I doubt it, Popeye . . . Iron crosses don’t go down too well in this part of town.” To which the sailor replies “I unerstan’s.” This is a Popeye for the times.

It was that hyper awareness of the world around him that ultimately brought an end to Mr. London’s run. A new wave of management at King Features was looking towards a new series of Saturday morning cartoon from Hanna-Barbera that was about to debut on network television.

Their vision of Popeye sculpted the Sailor into a family man who was married to Olive and had a son named Popeye Jr. It was determined that the daily should reflect the family-friendly version of Popeye.

This was in direct conflict with Mr. London’s version of the sailor. Just as a storyline which had begun with Olive’s addiction to the Home Shopping Network was coming to an end, they removed the artist.

When the Syndicate had originally released Mr. London from his contract in 1992 they replaced the then current storyline with repeats of earlier strips. In short they left readers hanging. Now fans can finally read the entire extended arc which brought about the artist’s departure.

With this release King Features Syndicate and Mr. London are both to be congratulated for putting the ideas of history and art before the conflicts of the past. This is one of the great runs in modern comic history.

Few quotes can better sum up the absurdity and conflicts that make up our lives than “Sailor’s don’t eat quiche. But if ya’ has made an egg pie, I’ll eat that.” Neither Shakespeare nor Faulkner could have ever said it better.