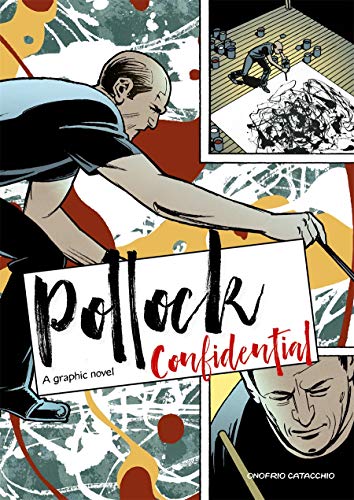 “In Pollock Confidential, they’re given a fascinating slice of this mercurial artist’s life, a strange marriage between a conservative government intrigue and rebellious creativity.”

Onofrio Catacchio, a well-known Italian graphic novelist, tackles a distinctively American subject in Pollock Confidential. Catacchio approaches the famous painter from the point of view of a CIA agent assigned to the case of promoting the careers of American Abstract Expressionists in the face of Soviet dominance in the 1950s art world. It’s a stranger-than-truth story, that the CIA would care about see American contemporary art as a tool to fight Soviet propaganda. The basic story line follows historical facts about how the CIA developed “Operation Long Leash” to use important collectors like Peggy Guggenheim to advance the careers of these new artists, though the character of CIA agent Adkins, who narrates the story, is invented.

Naturally, as an Italian, Catacchio starts the story in Rome, with Adkins seeking out Pollock paintings for a fictional retrospective show. There’s really no need for this framing device except to give the story an Italian angle, nor does it make any sense for a CIA agent to be involved in an exhibit long after “Operation Long Leash” has ended. The book could have easily begun with the double-page spread of New York, 1948: “During the Cold War, top CIA officals carry out a secret plan designed to promote Abstract Expressionism and American Contemporary Art. The aim is to counteract the cultural influence the Soviet bloc is having on Western artists and intellectuals.”

Agent Adkins is assigned to Pollock, though it’s never clear precisely what he’s supposed to do other than keep an eye on him (looking for what?). The more interesting historical story would perhaps be how collectors and galleries were influenced. Instead this is more a story about Pollock’s creativity as Adkins watches Pollock paint. The strongest pages are those that feature Pollock’s own words about his process. In the most striking image in a book full of beautiful illustrations, we look down on Pollock in his studio as he looks down on the canvas he works on: “When I’m in my painting, I’m not aware of what I’m doing. It is only after a sort of ‘get acquainted’ period that I see what I have been about. . . . I have no fears about making changes, destroying the image, etc., because the painting has a life of its own. I try to let it come through.”

Pollock’s life and art are laid out succinctly and powerfully in a brief encapsulated form. His relationships with other artists is hinted at but not explored, and his wife Lee Krasner is relegated to the traditional supportive role, rather than recognized for the power and originality of her own work. Readers will perhaps be inspired to learn more about this key figure and his world. In Pollock Confidential, they’re given a fascinating slice of this mercurial artist’s life, a strange marriage between a conservative government intrigue and rebellious creativity.