The Poison Tree: A Novel 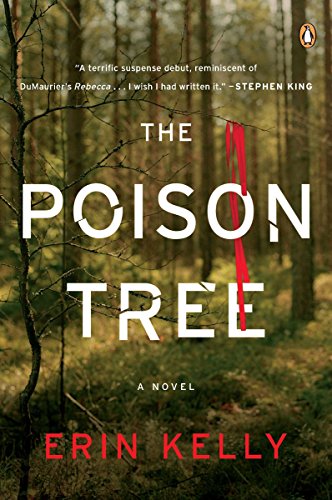 Erin Kelly’s impressive debut novel, The Poison Tree, tells the tale of seemingly prim and straight-A language student Karen Clarke who has just finished her final year at university in London. Unceremoniously dumped by her boyfriend for another girl and abandoned by so-called friends, she is feeling isolated and betrayed. Up till now, Karen’s life has been uncomplicated and risk-free, but that’s all about to change dramatically.

By chance she meets the exotic, free spirited Biba Capel, a bohemian orphan and actress. Biba lives in a crumbling old mansion in Highgate, London, with her enigmatic and somewhat creepy brother, Rex, and a host of other dodgy if somewhat colorful characters. She also just happens to be looking for someone with knowledge of German to help her with an upcoming play, and Karen fits the bill perfectly.

Using her newfound freedom as an opportunity to extend herself beyond her comfortable friendship group, impressionable Karen is drawn into the siblings’ chaotic lifestyle of hedonism, and moves into their crumbling mansion. Shortly afterward she begins a relationship with Rex, believing she has discovered a heavenly Utopia in this world of sex, alcohol, drugs, and mystery. Unfortunately, she is totally oblivious to the family secrets—suicides and other unhealthy events—and it’s not too long before something dreadful happens resulting in death. Heaven suddenly and violently becomes hell, and Karen’s life will change irrevocably, possibly for the worse.

Told skillfully in Karen’s perspective between the past and the present, this intelligent psychological thriller begins when Karen and her nine-year-old daughter, Alice, pick up Rex who has just completed a ten-year term in prison for murder. When events from her past come back, threatening to destroy the life it has taken Karen years to build, she knows she must do whatever it takes to protect that life.

Whose murder was Rex charged with? And more importantly, was he actually guilty of the crime? This is only one of the many intriguing hooks Kelly masterfully uses to capture the reader from the very start.

Kelly’s descriptive prowess of depicting London’s 1990s and in particular the Highgate area, is evocative and skillfully constructed, and while some readers may find the juxtaposition of past and present narration slightly disconcerting, others will probably find that it actually increases the suspense and page-turning lure. Hints and decoys are used sparingly and rarely interfere with the flow of the storytelling. Apart from the three main players, there is also a grand and motley crew of memorable characters assembled, some endearing and others borderline despicable.

Disturbingly foreboding, The Poison Tree is an atmospheric crime novel delivering edgy and unpredictable heart-stopping twists and turns we never see coming until we are punched in the gut.

A refreshingly new and original voice in thriller writing, Kelly’s a name to watch for in the future.