Plutocrats: The Rise of the New Global Super-Rich and the Fall of Everyone Else 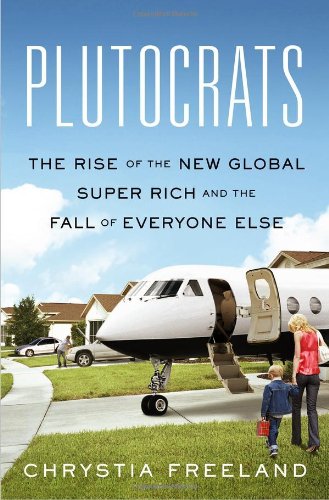 “. . . despite Ms. Freeland’s tut-tutting about the new power elite, her unintended message is that money, status, and power have always been the gods we pursue.”

And a big hearty welcome to the newest political and media meme: America, Land of Inequality.

Where the one percent rules the other 99 and half of us are on the dole.

And where—according to Chrystia Freeland’s Plutocrats—we, the hoi polloi, are exploited by a small group of movers and shakers whose thumbs tilt the scales of life.

It’s the latest incarnation of the Bilderberg Group, the Pentavirate or any other omniscient cabal that flips your wig.

There’s nothing particularly new about this. In the U.S., it’s the latest movement in a sonata that has always pitted plutocracy against populism—a struggle in American political and social thought as long as the republic itself.

Think of roughhewn Andrew Jackson ascending to the presidency after a long line of privileged Virginia planters and thinkers. Or William Jennings Bryan gutting Gilded Age profiteers with his “cross of gold” rhetoric.

Even FDR, the ultimate Hudson Valley aristocrat, found the banking community convenient whipping boys as he crafted his image as the champion of the workingman.

She then rounds up the usual suspects and places to root out this era’s plutocrats: folks like George Soros, Eric Schmidt, and Steve Schwarzman; denizens of Ivy League schools, Silicon Valley, hedge funds, TED, Sun Valley.

In Plutocrats, they’re lurking around every corner, not just the U.S.—Russia, China, Brazil—inescapable, like the “Invasion of the Body Snatchers.”

Indeed, absent any real analysis or coherent thesis, Plutocrats dips its brush in just enough paranoia to satisfy the conspiracy junkies on both the left and right.

What’s worse, it reads like a 300-page article stitched together with hundreds of secondary sources—relying on the same names, institutions and anecdotes one might find in the latest BusinessInsider or Forbes.

In the end, we’re left with a tried-and-true gawk at what things are on the surface with nary a glance beneath the shiny gloss of the material world. It’s the same pulp conflict that politicians, profiteers, and journalists rely on to keep us voting, buying, and reading.

If anything, Plutocrats unknowingly reinforces the tar pit of Western thinking—that our salvation comes through the demands of the ego. “If only we had more (of this) and less (of that), then everything would be fine.”

Thus despite Ms. Freeland’s tut-tutting about the new power elite, her unintended message is that money, status, and power have always been the gods we pursue. The big materialistic scoreboard determines what we are rather than our innate spirit.

Sadly, Plutocrats perpetuates the unconscious world most of us inhabit—dominated by an inner voice that chatters endlessly about the past and future, about getting more and satisfying every need as it occurs.

And as ammunition for Occupy Wall Street and other political proselytizers, it is the catnip they need to continue chasing their collective tail.

Their big ideas to cure social problems, their quest for “fairness” will never be achieved by new laws, regulations or taxes.

Instead the folly of obsessing on “just” outcomes and fairness can only be solved by closing up the painful holes in our own hearts.