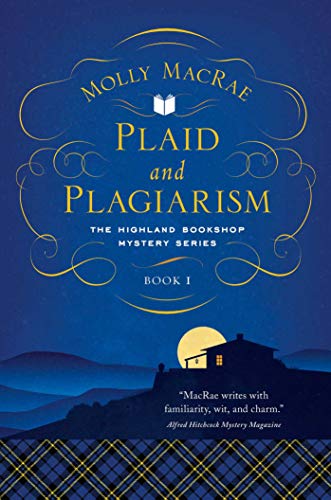 Plaid and Plagiarism by Molly MacRae is the first in the new Highland Bookshop Mystery Series.

This cozy mystery has a fun premise: the new owners of Yon Bonnie Books have barely taken over the shop when murder most foul occurs.

Renovations to the shop include a tea room, and tenants in Janet’s house include . . . well . . . murder.

Later as Janet is worrying over the delay in removing the tenants from her house, and unable to contact the real estate agent, the group decides to visit the house and find out for themselves the reason the tenants have remained past their exit date.

The visit reveals some very disturbing issues: a house full of garbage, no tenants, and Ug’s dead body in the garden shed!

A good premise, indeed, but from here the story becomes a little murky. Other than Janet’s house now being a crime scene, it is unclear why Janet and her cohorts believe it is up to them to do the sleuthing.

Local officer Norman Todd, young and inexperienced, is portrayed as a somewhat inept investigator, and his role in the story contributes little to resolving the crime.

A bevy of characters begin to surface, with Janet, Christine, et al applying motives to each person for wanting Ug dead. While a crime mystery indeed needs more than one possible suspect, there are so many in this story that it is hard to keep them separated.

There is the real estate agent, Jess; the mystery novelist, Ian; the previous bookshop owners, Ken and Pamela; the fix-it man, Rab; the librarian, Sharon; even Janet’s ex-husband comes under suspicion for a time. And these are only a few of those under scrutiny.

A series of events occur such as several trash bags dumped outside the bookstore, and a mysterious tin of letters found inside the shop. Janet et al jump on these events as having strong attachments to the crime; the reason for these assumptions is not clear.

MacRae’s handling of dialogue is both humorous and curious. Humorous because she uses dialogue to paint pictures of exactly what her characters are doing and thinking at any given time. Curious because there is so much additional dialogue business, that at times it reads like a script and the author is directing a group of actors when to step sideways, when to nudge someone to keep them from falling off a curb, etc. Although dialogue business can often be helpful, MacRae tends to overuse this technique almost to distraction.

There are moments when the dialogue between more than two characters is confusing due to lack of dialogue tags. Also, a lot of internal dialogue, designed to be humorous, seems to be overdone. There is a sense that the murder is more amusing than it is serious.

Throughout the search for the true perpetrator of the crime, MacRae adds some events that could detract from the flow of the story. Officer Todd plants his grandmother in the bookshop as well as in Janet’s house because the grandmother’s space in a retirement home is not yet available. Although the grandmother is a cute addition, her appearance in the story is a definite distraction and has nothing to do with resolving the crime.

By the end of the story, distractions notwithstanding, the premise remains a good one for a cozy mystery. MacRae brings the story to a logical conclusion with a bit of excitement at the end. The true criminal gets the comeuppance earned, and Janet and company presumably will now move on to solve more crimes.

For the reader who is looking for a good crime thriller, this is not the book. But for an evening read on a cold night with a cup of tea, this will do nicely.