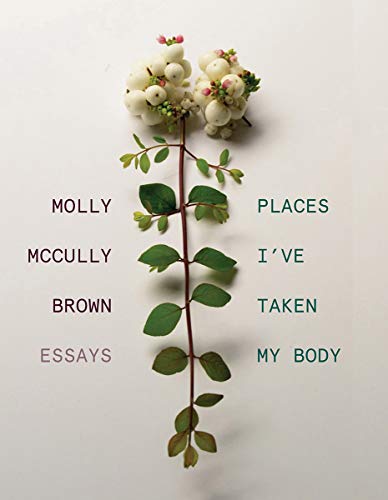 “Places I’ve Taken My Body is an unblinking personal journey that takes us to places we all need to know and understand better.”

Molly McCully Brown’s Places I’ve Taken My Body is a moving collection of autobiographical essays chronicling her life as a poet, teacher, millennial, world traveler, and a woman with cerebral palsy that doesn’t stop her from being a fearless explorer of physical, cultural, and emotional terrains.

Brown’s acclaimed 2017 first book of poetry, The Virginia State Colony for Epileptics and Feebleminded, was named for a century-old institution her family lived near and where, had she had been born with cerebral palsy generations before, she could have ended up. The poems were inspired by the case files of the inmates who perished there. Brown wrote in the voices of the women who were victims of cruel medical and legal crimes including medical officials misdiagnosing, experimenting on, and sterilizing without their consent.

In Places I’ve Taken My Body Brown recounts going to the institution walking on the sloped terrain and throwing herself on the ground realizing that “I remembered hearing about the doctor who told my parents when I was born in 1991, that I would probably never live independently, might never even speak. I felt time and space collapse: sixty-five years ago, born in my hometown, I might have lived and died in the Colony, been buried in that field.”

She did instead defy her pediatric doctors and lives independently and speaks loudly and intimately about how she negotiates an often-hostile world and stares down pervasive multilayered discrimination she faces in an America that is obsessed with appearance and prejudice toward people with disabilities.

Many of her essays delve into the unwavering support of her close-knit academic family who discussed everything and were supportive of her goals even when they felt she was heedless of her perilous physical condition. People with cerebral palsy must contend with neuromuscular problems that present in different ways throughout their lives. Brown survived through a lifetime of pain, countless corrective surgeries, and long recoveries before she was fully grown.

Brown’s parents were teachers, and she grew up in a non-religious family but decided to consider joining the Catholic Church and going to divinity school while studying in New England at 17.  However devout she was studying to be, in one adventurous episode she and a friend break into an empty house just for the hell of it.

In “Frankenstein Abroad” she writes about being unstoppable in unwelcoming environments and situations all over the world, including no access for wheelchairs in regions of Italy, where Brown was on a fellowship studying religious architecture. The most moving essay is “Fragments, Never Sent” comprised of journal entries she wrote to Francis, her twin sister, who died at birth.

In “The Broken Country: On Disability and Desire” Brown navigates sexual relationships and dealing with boorish sexual rituals and biases. She has experienced being an object of sexual curiosity, a clueless bias of public pity, and instances of sexual revulsion. She overhears a college boy telling some mutual friends that he felt sorry for her because she was going to die a virgin. Brown writes “With some weird, wrong breed of kindness in his voice, drawn a border between my body and the country of desire.  It didn’t matter that, by then . . . more than one person had already looked at me and said ‘I’m in love with you,’ and I had said it back.”

Brown is a superb essayist in both technical form and unexpected titles alone make you want to read them: “Muscle Memory,” “If You Are Permanently Lost,” “The Skin You’re In,” “Bent Body, Lamb,” “There’s Something Wrong With Me,” “Narrative and Need,” “What We Are,” “Public Anatomy” . . . they are passionate, wry, and unflinchingly frank. And she breaks the ice with strangers being confused by her physical condition; Brown routinely has to inform people, “I have cerebral palsy, kind of like having a stroke when you are born.”

Before she became a writer, she embarked on various academic tracks. She became a public school teacher in Texas, where she encouraged her middle-school students to feel free to ask her anything, however inappropriate, about her seeming disabilities because it would lead to a teaching moment and more understanding. Places I’ve Taken My Body is an unblinking personal journey that takes us to places we all need to know and understand better.