Pink Triangle: The Feuds and Private Lives of Tennessee Williams, Gore Vidal, Truman Capote, and Famous Members of Their Entourages 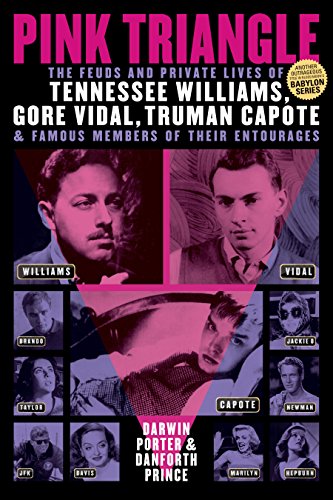 “You may not weep for any of the three—but you will . . . be enthralled by them and by the over-population of wits, talents, artists, stalkers, hangers-on, and the truly deranged who populated their world.”

In the banquet that is Pink Triangle: The Feuds and Private Lives of Tennessee Williams, Gore Vidal, Truman Capote and Famous Members of their Entourages, the first meeting between Gore Vidal and Truman Capote seems too good, too revealing of the natures of both of these men, to be true.

It is said to have taken place in those post-World War II years in which the streets of Manhattan sparkled with possibilities. Vidal was 20 and Capote 21 (although the author tells us that he looked 12 and “spoke like strangled child”) when each entered into the Greenwich Village home of author and tireless diarist Anais Nin, with whom Vidal, fresh from the military and being stationed in the Aleutian Islands, was having a brief flirtation.

Vidal, we are told by Paul Cadmus, a painter among mostly poets, playwrights and other forms of literary life, “was formal and stiff, with military posture.” Capote, for his part, walked up the stairs on West 13th street to tap on the door of Nin’s skylit apartment and make a late entrance into the party wearing a long black cape and matching black fedora, on the arm of critic and literary lion Leo Lerman.

He was “a small, slender young man, with hair over his eyes, extending the softest and most boneless hand.”

Vidal, who had, to that point, been pursuing poet James Merrill, could not have helped but notice Capote’s entrance. And the two circled each other for some time. Vidal, who had just recently published the admittedly outright gay novel The City and the Pillar divided his attention between poet Robert Duncan and his lover, painter Robert DeNiro, Sr. Capote flitted and fussed and, finally, just walked right up to Gore Vidal and said, in his characteristic whine:

“How does it feel to be an onn-font-tarribull [enfant terrible]?”

To which Vidal, ignoring the question altogether, replied:

“Did you know that in Italian capote means ‘condom?’”

And in this brief exchange, the two managed to both reveal completely the nature of their ongoing dialogue that would last for decades (ignoring each other) and the central characteristic that each brought to the friendship (the need to outdo each other).

Concerning the Aleutians, Capote would later say that, while serving there Gore Vidal suffered from frostbite, and that “he’s not melted down yet.”

Anais Nin, who witnessed the historic meeting, summed it up this way:

“Almost from the beginning, Gore and Truman sized each other up as future rivals. After all, there could be only one enfant terrible. Gore was almost a historian, dealing in facts, whereas Truman came from the Southern school of raconteur, meaning he never wanted a fact to get in the way of a good story. Gore camouflaged his homosexuality, whereas Truman used it to draw attention to himself. The more flamboyant he was, the more onlookers he attracted.”

And so it begins, nearly seven hundred pages of the most entertaining histrionics ever sliced, spiced, heated and serviced up to the reading public—as already noted: a banquet.

And the best part of it is that, good as Vidal and Capote are as a “sister act” it only gets better when Tennessee Williams is added into the mix. The three together in their various flirtations and feuds, their tableau vivant postures, their hissy fits on The Tonight Show and their courtroom dramas—to say nothing of their literary and theatrical triumphs and their culture-shaping creative output—make for a story, a triplicate biography, that has long needed to be told. Thus, if Pink Triangle (a perfect double entendre title, by the way, that would have had Williams issuing his honeyed whoop, Capote giggling and Vidal rolling his eyes) had not been written for us, we would have had to research it and type it all up for ourselves.

Pink Triangle is the product of Darwin Porter and Danforth Prince, the partners behind BloodMoon Productions. BloodMoon has already produced biographies on such folks as Katharine Hepburn (in what turned out to be a highly controversial, highly entertaining tome), J. Edgar Hoover and Clyde Tolson, Elizabeth Taylor, Merv Griffin (A Life in the Closet), Brando Unzipped and, in one of the most addictively readable biographies of the past few years, the Gabor Sisters.

But as the classicists tell us the past is but preamble, because all that BloodMoon has done before pales in comparison with Pink Triangle.

Never before have so many names been dropped—scattered like rose petals at a wedding, actually—as here in these many, many pages. And certainly, never before has Frank Merlo, the most put-upon man who ever lived, had a book dedicated to him (and to actor/writer/taste-setter Stanley Mills Haggart as well.)

Merlo, Tennessee Williams’s One Great Love, was deserted by the writer and allowed to shrivel up and die all on his own in an antiseptic hospital room. Which reveals a good bit of what there is to know about Williams. (Along with the fact that he allowed his sister Rose to be first hospitalized and then lobotomized before guiltily writing about her in The Glass Menagerie and Suddenly, Last Summer.)

The chief weakness of the work is that, in spite of the fact that the book is dedicated to him, Frank Merlo’s impact upon Williams’s life is reduced to the fact that he accompanied the playwright to most of his triumphant opening nights. The tale of the complex and tormented love between Williams and Merlo is largely left untold. Ditto Gore Vidal’s long-time, reportedly chaste bond with Howard Austen and Truman Capote’s tortured, alcohol-soaked relationship with Jack Dunphy.

For this is a book of marquee names and not a place in which the deepest emotions are explored.

Such is the fabric of Pink Triangle: lovers lost, faces slapped, trysts undertaken and trysts uncovered, and fame and drink and drugs, and New Orleans and Key West and Los Angeles and New York and Rome and Paris and the Amalfi Coast, and the paparazzi, the red carpet, and excess—to the point that hundreds of pages into the book it seems as if the dizzying whole of it is an account of the fever dreams of Myra Breckinridge, Holly Golightly, and Blanche DuBois.

Admittedly, the reader suspects that Porter and Prince may err more on Capote’s side than on Vidal’s in terms of their aforementioned authorial approach to the material—that they may be more raconteurs than historians. That they may be unable to bear the idea of not sharing with their reader a particularly juicy anecdote or two just because their sources may a bit more gossip-based than researched fact.

But given the fact that the subjects of the book themselves were nearly delusional on the subject of themselves (to say nothing of each other) it is hard to find fault. Most especially when many the stories contained herein have been oft-repeated (again, often by Williams, Capote, and Vidal, while they were still with us) and are certainly not the creations of the authors.

What we have here in Pink Triangle is something over-the-top, compulsively readable, even—to use one of Tennessee Williams’s favorite words for those that he hated or loved—deranged. Certainly some of the “tabloid-speak” chapter titles and section headlines bring that particular word to mind: “Marlene Dietrich Lip-Locks Pearl Bailey,” “Broadway Fall in Love with a Sweaty Red T-Shirt and Too-Tight Jeans,” and perhaps the best when Vidal meets and beds Russian ballet dancer Rudolf Nureyev: “Gore ‘Dances’ with Rudi in the Nudi.”

The tales of old Hollywood, of Elizabeth Taylor calling Tennessee Williams from the set to complain about Paul Newman’s behavior (“He’s doing everything he can to steal every scene from me, even indulging in male burlesque. He’s been stripping down to his underwear and running around, anything to distract from my best dialogue.”) of Capote’s work on the John Houston/Humphrey Bogart film Beat the Devil, of Gore Vidal’s insistence on writing a homosexual subtext into Ben-Hur, while himself having an affair with one of the film’s lead actors, these alone are worth the cost of the book.

To say nothing of Mae West’s so disliking Gore Vidal during the making of Myra Breckinridge that she firmly instructed him to “Don’t come up and see me sometime.” Or the truly hilarious ongoing love/hate relationship between Tennessee Williams and actress/gay icon Tallullah Bankhead. Or the Hollywood True Story of the making of Breakfast at Tiffany’s and of the loving friendship between Truman Capote and Marilyn Monroe, who he had wanted to star in the film.

But add to all this the intertwined jungle that was the relationship among Williams, Capote and Vidal, of the times they vied for things they loved most—especially attention—and the times they enthralled each other and the world, and you have the perfect antidote to the Polar Vortex.

And while, let’s face it, the book does in truth have more penis than heart, the authors do show compassion to their subjects, both in times of ill health (brought on variously by overindulgence, alcoholism and old age) and obscurity (Capote was famously “blocked” and unable to complete his final novel Answered Prayers after the publication of selected chapters brought about his ruin in Manhattan society; Williams found the title “has been” more and more affixed to his reputation as he turned out vaguer and stranger new works of theater).

Particularly touching is this, Truman Capote’s statement of his experience of old age:

“My eyes are tired and sad, and I am growing weary day by day. The world has grown stale like a piece of week-old bread left in an abandoned kitchen.”

To which Vidal rejoined:

“In my fantasy, I dream of going back to Rome in that rented penthouse on top of the decaying 17th century Palacio Origo where Howard Austen and I lived for some thirty years. I had never had a proper human scale village life anywhere on Earth until I settled there. Literature? Two blocks to our north, back of the Pantheon, Thomas Mann lived and wrote Buddenbrooks. Nearby, George Eliot stayed at the Minerva Hotel. Aristo lived in Pantheon Square; Stendhal was also close by. In that apartment, I wrote Myra Breckinridge in one month, one spring, from new moon to new moon. But I am too weak to return.

“The question remains. On that upcoming dark and stormy day, as thunder is heard across the skies of Los Angeles, will there be any real sadness at my funeral?”

You may not weep for any of the three—for Tennessee Williams, Truman Capote, or Gore Vidal—but you will, in reading Pink Triangle, be enthralled by them and by the over-population of wits, talents, artists, stalkers, hangers-on, and the truly deranged who populated their world.