The Physics of War: From Arrows to Atoms 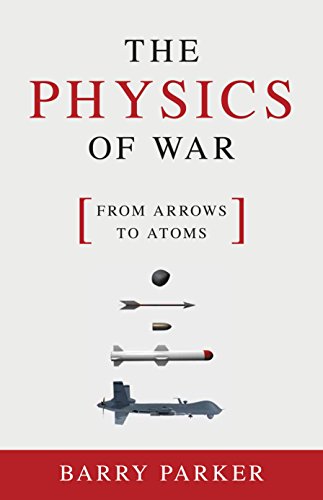 “The Physics of War is uneven in covering physics and war, conflates physics with technology, and conflates war with history. . . . what Barry Parker does do well (and he does do some things well), is tell stories that will hold the reader’s interest.”

A glance at the table of contents shows Barry Parker, the author of The Physics of War to be ambitious. How he can cover the exceedingly wide range of physics from the bow and arrow, to the catapult, to guns, radar, and the atomic bomb, to computers, robots, drones, and cyber warfare in only 340 pages?

Well, it turns out he cannot. The Physics of War is uneven in covering physics and war, conflates physics with technology, and conflates war with history. The Physics of War is better at the beginning where there is not all that much in the way of physics in war than at the end when there is way too much physics and war, and as a consequence the narrative becomes oversimplified to fit the remaining pages. Given the author’s failure in his overreach, what Barry Parker does do well (and he does do some things well), is tell stories that will hold the reader’s interest.

Surprise has great value in the tactics of war but not so much in its strategy. Surprise presents a weapon to an enemy that it does not have nor a defense against. Technology (and the physics behind technology) provides that new weapon: the chemistry of gunpowder and poison gas, the mathematics of ballistics, the technology of submarines, tanks, and radar, the physics of atomic bombs and so on. If one side presents a new weapon, the other side copies and escalates or counters with a defense, a cycle leading to further advances in technology and weaponry. One might say that physics is a driver of arms races, and arms races are drivers of physics.

In early civilizations, there was no concept of physics, and science didn’t exist. Then as now though, man’s goal in war was (a) weaponry that offered greater lethality at greater distance and (b) greater mobility to allow an attacker to engage or disengage at will. The technology of saddle, harness, and stirrups provided both kinds of advantage; the Goths used a bow and arrow on horseback to beat the Roman army.

In the Medieval era there was an intuitive understanding of “simple machines”, the lever, wheel, gear, screw, pulley, and inclined plane—though the understanding of the physics had yet to be worked out. Weaponry took advantage of energy stored through bending, twisting and torsion forces, as for example with the medieval crossbow, the ballista and the onager. The trebuchet worked on the fulcrum principle, depending on gravity and counterweight.

The sword and arrow were defended against by the wooden shield, chainmail and suit of armor, though armor was expensive and only a relative few could be so outfitted. The sword, bow and arrow required training. Though the crossbow required less training and had greater power it took a longer time to reload. Longbows had greater range and faster reload but required greater strength and training, though when fired in large numbers, arrows sent by barrage didn’t need tremendous accuracy.

The countermeasure against the mobile attacker was a castle protected by high stone walls. Gunpowder was first used in China in the 1200’s for fireworks, and its knowledge soon spread to Europe and England. The technology of cannon, its metallurgy, chemistry, and mechanics improved during the Hundred Year’s war from 1337 to 1453, and by the mid 1300s was being used to reduce castle walls, making the castle as a defensive structure obsolete.

Though there was little interest in science aside from its use in war, in the Medieval era there were scientists ahead of their time, including Leonardo da Vinci, Niccolo Fontana Tartaglia, and Galileo Galilei. Of these, Da Vinci was more of an observer who made drawings of proposed military machines. Tartaglia, a professor of mathematics started the science of ballistics by improving cannon accuracy through the use of his invention, the “gunner’s gradient”, a device that showed angle versus distance. Though there was no understanding of gravity or inertia, both were furthered by Galileo, the father of modern physics. Galileo demonstrated that gravity’s acceleration was independent of mass and improved on Tartaglia’s invention.

In the Thirty Years’ War in Europe between 1618 and 1648, efficiency in weaponry led to lighter cannon and the use of premeasured powder. Lighter cannon meant they could be installed on ships. As cannon weight kept being reduced, the “hand cannon”, the single shot musket, and the pistol soon followed.

Physicist and mathematician Sir Isaac Newton (1642–1727) had no interest in the military though his discoveries had an effect on weapons and warfare through a better understanding of physics. The advancements in physics during the industrial revolution from the mid 1700s to mid 1800s also led to improvements in weaponry, though initial attempts to manufacture breach-loading weapons (to reduce the time it took to reload) were not successful.

Benjamin Robins, an English mathematician invented the ballistic pendulum that for the very first time measured a bullet’s speed as it left the barrel. John Wilkinson, an English industrialist improved cannons by boring barrels instead of casting them around clay cores. Boring provided tighter tolerances, which led to lighter cannons of the same or better range. Wilkinson’s cannon were not wanted by the England’s military, so he sold them to France, evading export laws by calling them iron pipe.

Lavoisier, the father of modern chemistry was the first to make a comprehensive list of the known elements, and also improved gunpowder production. Lavoisier was guillotined during the French revolution for his crimes (of being an aristocrat and a tax collector).

There were further discoveries in chemistry that made war more efficient. Mercury fulminate, an explosive that was considered too sensitive to replace gunpowder was instead used as primer that could ignite gunpowder in damp weather. The more efficient spring-loaded bolt, firing pin, and metal cartridge replaced the hammer, flint and paper cartridge.

Not all advances in physics are related to the needs of war. The reader learns about Benjamin Thompson (Count Rumford) who led the scientific revolution in thermodynamics, and learns about advances in electricity and magnetism led by scientists across Europe including Alessandro Volta, Luigi Galvani, Charles-Augustine de Coulomb, Charles Francois du Fay, Georg Simon Ohm, Hans Christian Oersted, Andre-Marie Ampere, Michael Faraday, and America’s own Benjamin Franklin.

By the 1830s breach loading repeaters and revolvers began to replace muzzle-loaded smoothbores. There were mass-produced “rifled” barrels, and bullet-shaped bullets. Bullets were initially cast as spheres but changed to an elongated form, called mini balls that were imparted spin by long grooves in the gun barrel, which was given a slight twist, called rifling. Spinning a bullet gave it gyroscopic stability that improved range and accuracy.

Manually loading bullets, even by breach loading was still too inefficient, so the manual “repeating” rifle advanced to the hand-cranked Gatling gun that used rotating barrels (by using many barrels, heat that would melt an individual barrel is lessened by distribution across many barrels—and the science of thermodynamics becomes applied to war).

By the mid 1800’s, electric motors and generators start to replace steam engines. Oak-sided sail-powered warships transition to ironclad steamships. Steamships transition from use of paddle wheel to long screw, to short screws with large blades called propellers. The first submarine to sink an ironclad was the Confederate ship H. L. Hunley (which itself sank soon after).

The artillery barrage of the U.S. Civil war was a revisiting of Napoleon’s tactics with lighter, more accurate, more rapidly firing weapons that resulted in horrendously increased though more efficient carnage. At the same time electricity gave the world the telegraph and Morse code, it began to be used to communicate orders, allowing a general to avoid having to be present at a battle while it was occurring.

Slightly past the mid-point of The Physics of War, Barry Parker goes into depth on the physics of ballistics. This section is more detailed than one might expect given that there is much more physics and war yet to come. Still, his explanation of “terminal ballistics,” where a projectile impacts and transfers kinetic energy to, or passes through its target (presumably the human body—though as it is expressed in such oblique language this reviewer is not quite sure), there is a surprising lack of detail. The exposition is clinical, feels awkward, and smells rotten.

Next up is the physics of aerodynamics. Parker gives a nod to the scientists and inventors of flight who are not always acknowledged because they are not the Wright Brothers. These luminaries of flight include George Cayley, Octave Chanute, Jacob Bernoulli, Henri Pitot, John Smeaton, and Otto Lilienthal. As to the rest of it (i.e. the war part), airplanes progress from first use to offensive weapon in ten short years. Airplanes are initially used to fly over and observe enemy lines and are unarmed but soon advance in lethality.

Between WWI and the atom bomb, Parker’s recounting of war is compressed and rushed as if he realized too late that the book had a page limit or was close to publication date. Parker’s history of atom bomb is more relaxed and includes biographies of atomic age luminaries, including Albert Einstein, Enrico Fermi, Otto Hahn, Lise Meitner, and Fritz Strassman, though again he avoids its human consequences.

The Physics of War is a worthy concept though incompletely thought out and unevenly executed.