Photographs from the Edge: A Master Photographer's Insights on Capturing an Extraordinary World 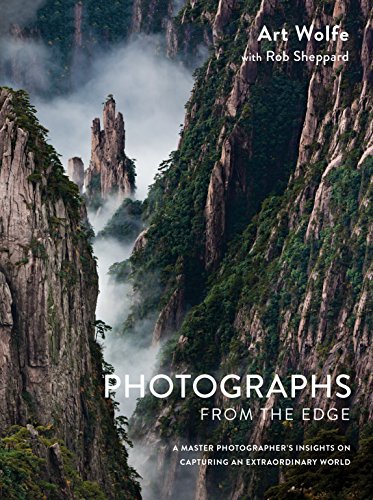 “the book succeeds as a primer for new photographers and inspiration for experienced lovers of photography.”

Art Wolfe has photographed some of the most remote and exotic locations on earth, but it is his insatiable curiosity as a creative spirit that sets him apart. Having begun as an artist working in oils and watercolors who was impatient in capturing the landscapes of the northwest, he became enamored with how the camera could assist him in capturing his vision. His love of nature and the outdoors led him to hiking, seeing new vistas, and traveling to foreign countries. Those exotic vistas and foreign countries are admirably represented in his book Photographs from the Edge.

The book takes the reader on a chronological journey through his photos from the 1980s to today, from film to digital, and from the United States to far-flung locations around the world. His images explore the whales of Canada, the leopards and lions of Africa, the cowboys of Brazil, the volcanoes of Iceland, as well as the spiritual journeys of people in India.

His beginnings as an artist imbued him with an unerring sense of color and design that have influenced his ability to capture beauty and create dynamic compositions. His selection of subject matter underscores his passion for nature, conservation, and respect for peoples of the world.

Art Wolfe’s down-to-earth approach in using whatever is most appropriate to create exciting and dynamic images sets him apart. His introduction at the beginning of the book sheds light on how—led by his passion for the outdoors—he began his business as an entrepreneur and why he is still driven to create. He also accompanies each image in the book with a story of how and why it was shot, including the technical specifics of gear and film used.

While I wish that many of the images would have been larger—several are two-page spreads and about one-third are full-page verticals—all are beautifully reproduced with brilliant colors and wonderful dynamic range.

Part travelogue, part portfolio gallery with over 130 images, and brimming with photo tips, the book succeeds as a primer for new photographers and inspiration for experienced lovers of photography. Most readers will find the anecdotes related to each photo fascinating in its circumstances, and most photographers will glean precious nuggets from the Photo Tips accompanying each image.