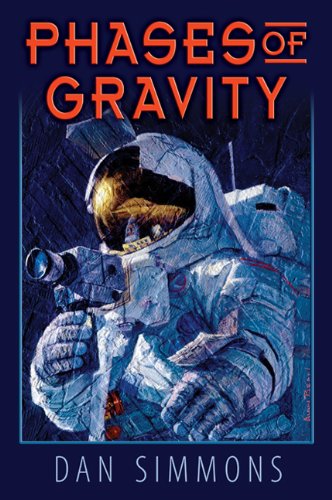 Dan Simmons is an excellent writer and a serious man, someone who thinks about what it all means and isn’t embarrassed to explore the mystical as well as the harder edges of reality. Anyone who has read his science fiction novels would know that. So it is not surprising to find those same qualities in Phases of Gravity, a plain and straightforward story of a man facing a midlife crisis.

This is a coming of old age story with a bit of a difference: The protagonist Richard Baedecker is a former astronaut and once walked on the moon. So Baedecker has more than the usual difficulty in dealing with the onset of his declining years and the loss of his glorious youth.

He does all the midlife crisis things: quits his job, forms a relationship with a woman less than half his age, and goes on a kind of road trip to revisit his past—in the form of the two other astronauts who went to the moon with him. He stops just short of buying himself a sports car. He is also trying to repair his relationship with his 20-something son who, at the start of the book, is in the thrall of a phony guru and doesn’t seem interested in his father’s problems.

Yet the book rises above these clichéd elements. The writing is neither beautiful nor poetic, rather it is plain and simple, letting the characters and their thoughts emerge without obfuscating clouds of lyricism. Even the scenes on the moon, vividly portrayed though they are, do not lapse into flowery prose.

The author has the knack of making thoughtful and pithy observations that not only fill out the characters but have a more general appeal. For instance, early in the piece, the young woman in Baedecker’s future is described as having an “awareness” that he associated with “true adults as opposed to those who had simply grown up.”

The decline of the space program is reflected in the decline of Baedecker and his friends, in the declining ethical status of the nation, post-Nixon, in his memories of his own father’s decline. When his father says in flashback, “The mistake is waiting and waiting for the payoff like it’s a reward you’ve got coming,” it sums up the passive acceptance—by everyone—of all that has gone adrift in Baedecker’s life.

If this hadn’t been a book by Dan Simmons, it would likely pass unnoticed—as it seems to have done when it was first released in 1989. Phases of Gravity is quiet, reflective, and intelligent, undoubtedly well written, but not a book that would excite too many readers.

Yet Dan Simmons’ is the name on the cover. There are hoards of Dan Simmons fans out there who will either love to see their hero-author writing in another genre and doing it well—or will hate Phases of Gravity because it is not Mr. Simmons’ usual fast-paced adventure story full of invention and color. It is hopeful there will be more of the former than the latter.