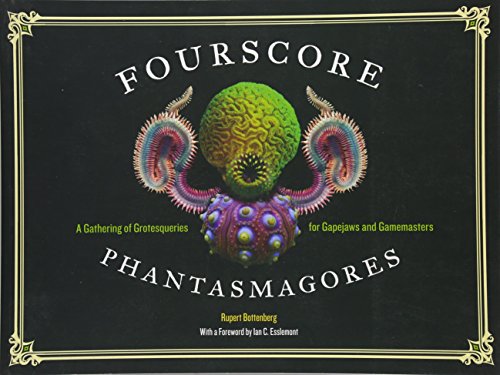 “The mind bends, recoils, and shudders at the beasts within.”

“The thing about the unspeakable god-monstrosities of the yawning interstellar abyss is, as one might remark of raccoons, they are in fact quite endearing when they are young,” declaims the flavor text for the Dwarf Cosmovore. Described as a “junior elder god . . . the size of a small moon,” it is one of the more playful inventions inside the pages of Fourscore Phantasmagores: A Gathering of Grotesqueries for Gapejaws and Gamemasters by Rupert Bottenberg. Conceived as a home-brewed “monster manual,” it will be a welcome addition to the gamemaster’s toolbox.

Released a little before this year’s Tabletop Day (April 29th), Fourscore Phantasmagores assures the entities enumerated in Bottenberg’ bestiary “without exception, can be used in the context of Dungeons & Dragons.” Other potential game settings include RuneQuest, Warhammer Fantasy, Call of Cthulhu, Shadowrun, and Vampire: the Masquerade. Besides RPG players and gamemasters, Fourscore Phantasmagores will also appeal to aficionados of fantastical taxonomies. Fans of Barlowe’s Guide to Extraterrestrials and Dougal Dixon’s After Man should explore these pages.

Bottenberg is a Montreal-based artist, writer, editor, and teacher. He brings his off-kilter artistic and literary sensibility to bear with this collection. Imagine the early era Monster Manuals conceived under a steady diet of The Kids in the Hall and Big Trouble in Little China. Everything is a little off. Malevolent beasts have funny backstories. Ethereal beauty haunts disgusting locations.

Bottenberg’s flavor text sounds as if he were playing the role of a mage whose had one too many. Describing a Mechanymous, he says, “Each one a testament to ingenuity if not congruity, mechanymi are a product of a tinker’s technological trickery, the bush shaman’s usance of natural detritus, and a stroke of rudimentary necromancy.” He depicts the creature like a mad assemblage of skull, piano chair, telescope, and plumbing. The style used to depict this wonky “chimerical clockwork homunculus” is reminiscent of 19th century illustrations. It is ominous and funny looking in equal measure.

Fourscore Phantasmagore’s reveals Bottenberg’s inventive imagination and his talent as an artist. Beyond a variety of painting and drawing styles, he also includes a few creatures done as sculptures. The Oculant was conjured “from the eye jelly of three animals—one feathered, one finned, one furred.” Its cuteness marred only by the giant eyeball peeping from a fleshly funnel atop its bipedal frame. Sculpted and painted in two-tone blues, it looks like a gazelle mated with a video camera.

A Polyfaune is captured in the style of animals seen on Pacific Northwest Native American totem poles. Meanwhile a Floefarer, a “mammoth sea mammal,” is depicted in a more realistic manner.

The mind bends, recoils, and shudders at the beasts within. Sometimes beauty and foulness merge, as in the case of the Miremaiden. Think mermaid or river nymph, except she haunts bogs and swamps. A Drasticulore is the unfortunate offspring of a fire dragon and an ice dragon. Bottenberg pictures the agonizing creature in the manner of stained glass.

Before heading out to the next RPG adventure, make sure to pack a 20-sided die, character sheets, and Fourscore Phantasmagores. These entities could populate a game with delightfully vile creatures and sinister NPCs (Non-playable Characters).