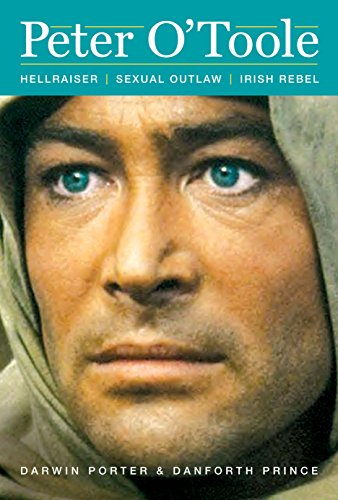 Where, in the past, the subjects of these “tabloid biographies” (written in chapters that resemble nothing so much as photocopies of The Enquirer and The Weekly World News) have been written about in a manner that some readers might consider salacious (Nancy Reagan, in her youth, is alleged to have been particularly skilled at treating her gentlemen callers to oral sex, Zsa Zsa Gabor is said to have had sexual congress with both John F. Kennedy and Richard Nixon) the latest celebrity to be put under the microscope—the aforementioned Peter O’Toole—is treated with something alarmingly akin to respect.

Which might, under other circumstances, be considered a good thing.

Understandably, the suggestion that Peter O’Toole had a fling with England’s Princess Margaret Rose on the island of Mustique might, in some (royal) households, be enough to grant him the title of “sexual outlaw,” but after all the allegations of sexual misconduct and/or experimentation ascribed to various Reagans, Kennedys, and Gabors, to say nothing of writers along the line of Gore Vidal, Tennessee Williams, and Truman Capote, and a string of Hollywood all-stars from Barbara Stanwyck to Marlene Dietrich to that ultimate hellraiser (and a sexual outlaw who knew what being a sexual outlaw was all about), Errol Flynn, the stuff that O’Toole is said to have attempted leaves him several notches down on the outlaw scale from his dear friend Richard Burton, and many, many slots below the ultimate outlaw, Mr. Flynn.

What Peter O’Toole mostly appears to be is very consistent actually, especially where his goals, self- congratulatory comments, and rude behavior are concerned.

In all these, he started out pretty early in life.

For instance, on his 18th birthday, he called his best friend to tell him that he had decided to give up his job at a local newspaper and run away to London:

“I decided that I don’t want to be a journalist,” he said, “I don’t want to write about the affairs of other people. I want journalists writing about my affairs. I think I want to be a famous actor . . . I’ve decided to storm the formidable walls of London Town . . . I’m heading south to conquer. Get out of my way [Sir Laurence] Olivier, or else I’ll knock you down and walk over your tired old body to claim my right in the spotlight.”

In this brief quote, O’Toole reveals two of the major themes of his life: ambition and the need for attention/fame.

What he proposed next to his friend on the day of his 18th birthday, August 2, 1950, illustrates another lingering theme:

“In the meantime, let’s get pissed. Booze is the most outrageous of drugs. That’s why it’s my preferred choice.”

Getting pissed and staying pissed seem to have been intertwined goals for O’Toole that placed second only to heterosexual intercourse on his ongoing bucket list. Acting, it seems, came in third.

When it came to sexuality, O’Toole insisted that he was decidedly straight and reportedly turned down Laurence Olivier, John Geilgud, Noel Coward, and Alan Bates, among many other interested suitors. This is despite the fact that many found his enraptured dance when first fitted with Arab robes in Lawrence of Arabia as a sign of fey tendencies. And the fact that his role as a “babe magnet” in Casino Royale—a role that had been cast with Warren Beatty, who quit the film, allowing O’Toole to take it over—was met with reviews that sighed with their regret that Beatty had been replaced. O’Toole, the reviewers insisted, made for a poor on-screen lothario. And the fact as well that the nuns in the Catholic school he attended as a child gave him the nickname “Bubbles.”

And then there’s this: while discussing the experience in Catholic school, O’Toole reportedly commented, “Nuns aren’t that smart. Imagine denying yourself cock all your life. If I were a heterosexual woman, I would take on at least six men a night from early morning to midnight.”

Still, Peter O’Toole got around. He made a wager with a friend that he could bed British actress Diana Dors, as well as Anita Ekberg and Jayne Mansfield and won the bet. And reportedly had an affair with the then-Mrs. Richard Burton, Elizabeth Taylor, while the three of them, the Burtons and O’Toole, were filming an adaptation of Dylan Thomas’s Under Milk Wood.

(While cheating on his wife Sian Phillips often enough to ultimately send her into the arms of another man, O’Toole did at least once rather famously state, in a spirit of fairness, that, “She’s a free woman. Just because she’s married doesn’t mean she has to be a servant to her man. There’s a wedding ring on her finger, not in her nose.”)

The Peter O’Toole who emerges from these pages is less a hellraiser than a braggart, less a sexual outlaw than a womanizer who proved to be a poor husband and a worse father, and less an Irish rebel than a pugnacious drunkard. He is, as presented in these pages, something of a bore.

But there is also Peter O’Toole the artist. Peter O’Toole the actor, who attained an iconic status early on with Lawrence of Arabia, who more than held his own onscreen against Katharine Hepburn in A Lion in Winter, and who returned after a period of flops and attempts to put his drinking behind him with The Stuntman and My Favorite Year and who acknowledged both his old age and his personal failures with a late-life minor masterpiece with Venus.

Where the gossip in this biography is played down compared to others written by the same authors, it is in the study of the man and the specifics of his movies that it succeeds, even if there is admittedly the odd factual flub. (Humphrey Bogart is presented as having attended the premiere of Lawrence in 1962, even though Bogart died in 1957.)

And the biography produced seems less entertainingly outrageous than the others produced by the House of the Blood Moon, more centered as a traditional Hollywood bio, giving the reader some rather good anecdotes about the making of this full film catalogue. And, indeed, the chapters dedicated to the making of Lawrence of Arabia, from the details of the nose job that O’Toole was required to endure in order to secure the role to a lively recreation of O’Toole’s bromance with Omar Shariff, form the beating heart of the book and are very satisfying indeed.

Even better—and equal to any salacious details that the authors have given us in any of their other, more outrageous, biographies—is any section of the book in which the Burtons appear. Tales of drunken binges, threesomes, banquets with food flown in from around the world, and battles, bruises, and screeched oaths bring the book to vibrant life and raise the question as to why the authors have not until now turned their attention to the most famous, oversized couple in world history: Liz and Dick?

If ever there were to be a perfect blending of authors and subjects, it would be Richard Burton and Elizabeth Taylor and Darwin Porter and Danforth Prince.

That would surely be the stuff of which bestsellers and Lifetime mini-series are made.