The Perfect Sound: A Memoir in Stereo 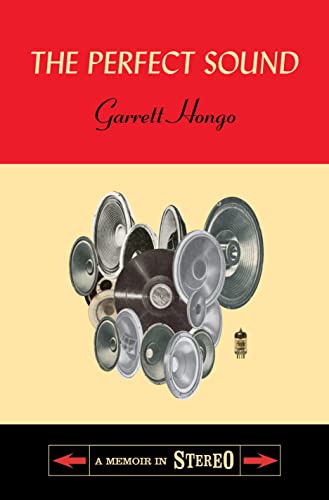 “Hong’s memoir is as perfect in tone and pitch as a memoir can be.”

A veteran book reviewer recently noted in print that “Garrett Hongo’s The Perfect Sound: A Memoir in Stereo is nearly impossible to encapsulate.” To an educated and sensitive ear that sounds like an abdication of the reviewer’s responsibility to their readers and also to the author and publishers. No book ought to be “nearly impossible to encapsulate.”

After all, one might say that it’s nearly impossible to encapsulate Melville’s Moby-Dick, Tolstoy’s War and Peace, or the 902-page novel, The Books of Jacob, by Olga Tokarczuk who won the Nobel Prize in Literature in 2019.

At more than 500-pages and divided into ten hefty parts with titles such as “It’s My Life,” “Talking Heads and Singing Platters” and “Among the Bohemians,” Hongo’s memoir is a kind of provocation.

It takes a courageous author to use the word “perfect” in the title of a book. After all, a snarky critic might want to call Hongo’s newly published work “imperfect.”

Yes, it can be messy at times and even seemingly directionless, but Hong’s memoir is as perfect in tone and pitch as a memoir can be.

It reflects, authentically, the warp and woof of the author’s own life, which has taken him over the last half century all over the literary map and into nearly every corner of the world of music, from operas and symphonies to blues, rock ‘n’ roll, and folk.

The Perfect Sound is the autobiography of a man who searches for his own voice and who chases “after fidelity.” To find that authentic voice and to own it, Hongo mimics the voices he hears in books and on records, CDs, and in the movies.

In Part Five, he writes, “I’d written poems in college, in Japan and in graduate school at Michigan, winning a few prizes along the way. This had gratified me, but I felt I was a bit of a fraud, what poets call a ‘magpie,” imitating the styles of others without one of my own.”

He adds, “I’d found it easy to ‘sound’ like another poet.”

If The Perfect Sound wanders, it’s because Hongo wandered for years, and because he wanted a book that would express fidelity to his own complex experiences.

A poet and a professor at the University of Oregon, Hongo was born in Hawai’i to Japanese American parents and grew up on O’ahu and in L.A. Early in life, he discovered that he loved music and wanted to capture and enjoy perfect sounds, perhaps an impossible goal.

In his memoir, he follows several tracks, some parallel, some not, weaves them together and creates a kind of symphonic masterpiece.

Parts of Hongo’s territory have been covered before, especially when that territory includes the Beatles and the Stones. Others have already written about the sonic revolutions of the Sixties and their reverberations in the worlds of ethnicity and social class.

Still, no one has done so with Hongo’s grace and poetic language, and no one has drawn, as he does, on the rich cultures of Hawai’i and on the tangled experiences of Japanese Americans in California during World War II when they were interned, and later when they fought for their rightful place in a society to which they gave their lives and their fortunes.

Hongo writes with compassion and understanding and with an appreciation for all the major and many of the minor musical traditions that have enlivened the US and that have come from immigrants, slaves, working men and women, and from musical geniuses like Bessie Smith, John Coltrane, and Jerry Garcia of the Grateful Dead.

Some Americans know where they were when they heard the news that JFK was assassinated in Dallas, Texas, or what they were doing when 9/11 happened.

Hongo knows what he thinking and feeling when he first heard a singer, songwriter, performer, or composer, whether Miles Davis, Aretha Franklin, or Gustav Mahler. Equipped with a vast auditory memory, he remembers all or nearly all of the occasions when he heard the same piece of music.

“When I hear a musical passage, it can be as if for the first time,” he writes. “My previous experience of listening to it renewed, then suddenly displaced by a recurrence that makes my memory of having heard it before evanesce as the more beautiful notes of this present listening trail out over the air, striking new chromatic registers.”

Hongo writes as passionately and clearly about technology—speakers, turntables, CDs, and more—as he does about class, race, and ethnicity in southern California where he mixed with teens his own age and who came from Japanese American and African American families.

His vivid writing about his own adolescence conjures a lost time and place when a friend named Alina played records and recited Rilke and Dylan Thomas.

“I felt deeply that there were other worlds expanding in my heart,” Hongo writes, “taking away the rage and boredom that possessed and vexed me, replacing them, in the words of one of Joni Mitchell’s songs, with globes of ambergris and amber stones and green.”

What teenager hasn’t had the same or similar feelings?

Hongo writes for music lovers the world over who come alive when they listen to Mitchell, Beethoven, Bessie Smith, or the work songs of men and women who toiled in fields and factories.

At the end of his memoir, Hongo writes, “I come from an affectless, unsentimental people, their emotions battered by three generations of brutal life on the plantations and conditioned to its harsh disappointments, resigned to limitations of birth and station.”

The Perfect Sound recounts how and why he overcame what he calls the “taboo” not to be expressive, and how his father’s music “overwhelmed” his “impoverished inheritance like a wave enfolding its barrier reef, barreling softly in glassy curls, foam and folds of lace.”

What a perfect way to end a memoir by a descendant of Japanese parents born on the island of Hawai’i.

Jonah Raskin is the author of the novel Beat Blues, San Francisco, 1955.