The Perfect Crime: 22 Crime Stories from Diverse Cultures Around the World 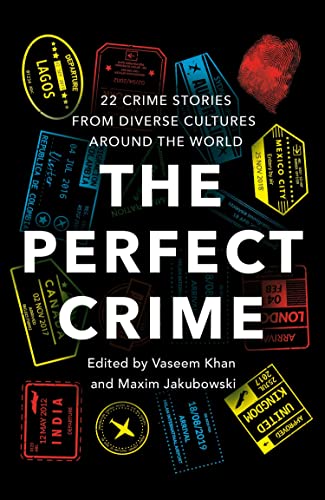 “The Perfect Crime is a must-read for every crime fiction fan looking for new horizons to explore in their favorite genre.”

Crime fiction readers tend to be avid and loyal fans, and one of their defining characteristics is that they’re always on the lookout for “new authors,” as in writers they haven’t heard of before or haven’t yet gotten around to checking out.

One of the services provided by a good short story anthology, then, is to showcase talent that may not have yet reached their full audience. To this end, Vaseem Khan and Maxim Jakubowski have assembled an impressive roster in The Perfect Crime, a selection of crime stories from diverse cultures around the world.

Emphasizing in the Introduction their wish to “bring more diversity to the publishing industry,” the editors have done a very good job of trawling in American and international waters to find quality short fiction to present to readers hungry for lesser-known fare.

The anthology begins well with “The Mayor of Dukes City,” a dark tale of late-night retribution by S. A. Cosby, a Virginia author whose novel Blacktop Wasteland (2020) won several honors, including an Anthony Award and the Los Angeles Times Book Prize. Fans of Southern noir who haven’t yet caught up to Cosby should do so forthwith.

An outstanding contribution to the cause comes from Sheena Kamal, whose story “Sundown” features a Vancouver private investigator who gets tangled up in a complicated and violent situation while she’s driving alone after sundown through a jurisdiction in Washington state that frowns on people of color being seen at night.

A Canadian with a degree in political science from the University of Toronto, Kamal’s debut novel The Lost Ones won the Macavity Award for best first novel, and it’s impossible to read “Sundown” without wanting more from her—much more—featuring this character.

Also notable in the collection are two period stories. “A Murder of Brides,” by Australian author Sulari Gentill, presents a mysterious homicide encountered by wedding photographers, with an appearance by author D. H. Lawrence added to the mix.

“Either Way I Lose,” by John Vercher, examines the dilemma faced by a young Black man in Ohama, Nebraska, in 1919, when ordered by a crime boss to assault a random white woman, the objective being to inflame racial disorder and discredit a local politician. Vercher, a Philadelphia writer with two novels to his credit so far, Three-Fifths (2019) and After the Lights Go Out (2022), definitely bears watching as an emerging talent.

The anchor of the collection, well-known crime fiction author Walter Mosley, rounds out the anthology with “Bring Me Your Pain.” An eccentric but entertaining tale of a man with a strange machine of his own devising that transfers emotional stress from subjects to the operator, it reminds one of vintage science fiction stories from the middle of the previous century, faintly echoing such tales as “Life-Line” by Robert Heinlein or similar work by Clifford Simak or Frederick Pohl.

As with every collection, some inclusions are less effective or interesting than others. But while the editors have focused on diversity in the authors whose work has been selected, the stories that flash in this anthology are, quite simply, those presenting to readers outstanding examples of excellent crime fiction writing.

The Perfect Crime is a must-read for every crime fiction fan looking for new horizons to explore in their favorite genre.