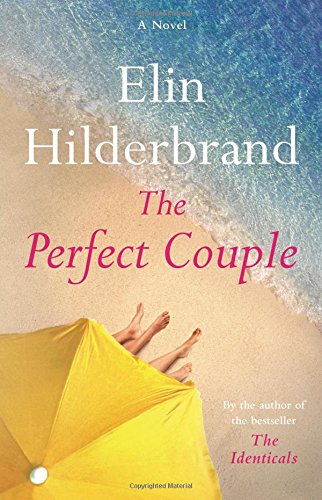 A suspicious death, two families from the opposite ends of the economic spectrum, each with secrets to keep, and a love story entice the reader to keep turning the pages no matter how late it gets, because The Perfect Couple by Elin Hilderbrand is not a book to put aside to finish tomorrow.

The Wedding of the Century on Nantucket to the Murdered Maid of Honor is a story that keeps the residents of the island gossiping in the diners, ladies’ coffee klatches, supermarkets, florists’ shops, on the wharfs, or anywhere else two or more people gather.

The wedding of wealthy Benjamin Winbury and Celeste Otis, daughter of working class parents, is a classic Cinderella story. Benji ignores the girls and women of his class to wed an administrator at the Bronx Zoo who lives in a sixth floor walk-up furnished with the best Ikea and Good Will has to offer, is a story no one can resist.

It is a tragedy when the maid of honor, Merritt Monaco, is found floating in the ocean just behind the Winburys’s fabulous Nantucket estate, Summerland. It is an irritant and inconvenience to Greer Garrison Winbury, mother of Benji, British mystery writer, and the woman in complete charge of the wedding.

“It’s customary for the bride’s parents to host and pay for their daughter’s nuptials, but if that were the case with Benji and Celeste, the wedding would be taking place in a church at the mall with a reception following at TGI Friday’s.”

Greer’s husband, Tag Winbury, tells her she is a terrific snob, and “Greer fears this is true.” However, in the case of Benji’s wedding she intends to avoid the horror of her elder son Thomas’ Texas wedding that began with a welcome party for 300 guests held at the Salt Lick BBQ and went downhill from there.

Besides, Greer is performing an unselfish act in taking over the wedding planning from Karen Otis, Celeste’s mother. Karen has stage four breast cancer and has only a few weeks to live. Not only is Karen unable to physically help with the wedding, but she and her husband, Bruce, are so overwhelmed with medical bills that they are too far in debt to pay for any kind of wedding.

Now the wedding will have to be postponed because the maid of honor got drunk, fell into the ocean, and drowned. She should have been more circumspect in her behavior the night before the wedding. Greer suspects Merritt may have been into drugs despite the fact that none are found in the guesthouse, and only a strong sedative showed up during the autopsy.

Something else is found during the autopsy: Merritt Monaco is pregnant. A pregnant girlfriend can be both an inconvenience and a motive for murder. But which of the male wedding guests is the father?

Another interesting question is why does Best Man Shooter Uxley try to flee Nantucket rather than talk to the police? And why was the bride, sweet Celeste, leaving Summerland with a packed bag before six o’clock on the morning of her wedding? Just in time to discover her dearest friend and maid of honor floating facedown in the water?

Who is the fortyish woman with the bad dye job from London who sells antiques and other valuable accessories to wealthy clients? Featherleigh Dale is not a welcome guest, but a long-time provider of expensive items to Greer, who felt it necessary to invite her to the wedding.

It was also an opportunity to watch Featherleigh and Tag. Greer suspects her husband is having an affair with the antiques dealer.

Chief Ed Kapenash of the Nantucket PD, and his partner in the investigation, State Police Detective, Nicholas Diamantopoulos, otherwise known as “The Greek,” separate the suspects or “persons of interest,” into two groups by gender. The Chief questions the men, and Nick takes the women. Nick is “so good-looking that people joke he should quite the job and just play a cop on TV . . .”

Both the chief and Nick agree that everyone is lying, whether or not they are lying about the murder or something else is the question. Even the bride when she recovers in the hospital after her hysterics finding the body, is holding something back, although her revelations about the secrets of the Winburys’s open “lines of inquiries.”

Even Karen Otis has secrets to keep. She keeps three suicide pills with her painkillers. When the pain becomes too much, Karen plans to kill herself. But her most horrible secret is not her own; it belongs to her husband Bruce, and is one that betrays everything Karen believes of her husband.

Hilderbrand skillfully alternates narratives of characters with flashbacks of events leading up to the wedding. Chapter by chapter she provides vignettes of each character’s behavior as his or her secrets are revealed and motives for murder become clearer. No family or person is perfect; they only appear that way to observers.

In additional to a compelling whodunit, Hilderbrand also provides a compare and contrast study of the extremely wealthy who buy $700 candles for engagement party gifts, and the barely hanging on who make their own candles of melted crayons.

But rich doesn’t buy happiness as illustrated by the Winbury marriage in which Tag is a serial adulterer. In contrast, Karen and Bruce are still in love after more than 30 years of marriage.

There is subtle humor, social commentary, brilliant characterization, and a suspenseful story. The novel’s ending is a bit abrupt, but when all secrets are revealed and lives are laid bare, the solution needs no further explanation. The puzzle is complete; what is, is.