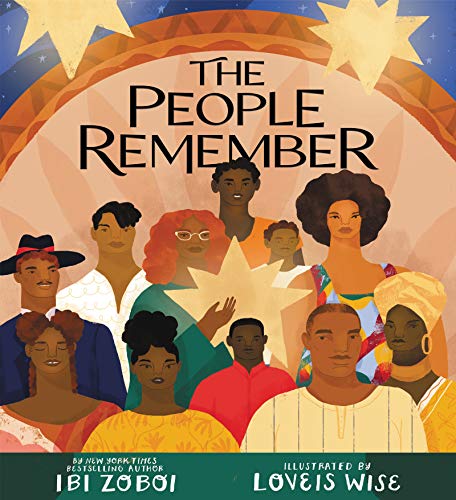 “The People Remember covers the most ground of any picture book out there regarding Black history.”

The People Remember is an oversized and stunning book for the ages. It’s the history of Black people in the Americas, boiled down to 64 pages. Although the recommended reading level is for four to eight year olds, there will be plenty of older children and adults who can learn a history that has been mostly left out of the public school system.

African people were living their lives when it happened. “While telling stories under the star-speckled sky about memories of their ancestors watching from way up high . . .”

Black people in America started out as captives of local African tribes. The dominant tribes would sell their enemies to slave traders. “The chiefs and the kings, the betrayers and traitors, for gold, copper, and iron, sold the people in this time of war.”

A turquoise and black double-page spread tells about the captives on the slave ships headed for America. “The men with the guns, skin like a pale sun, the men with the whips, the men on the ships watched the people leave their land, never to return as their bare feet left footprints in the sand.”

A mostly green spread tells of how some of the slaves jumped off the ships to avoid whatever lay ahead for them.

Once in the Americas, “the shores of South Carolina and Virginia, Hispaniola, and Brazil, some met their new masters, while others escaped toward the hills.”

The slaves from different tribes had to find “a common language, a new word for home.”

The reader sees at the bottom of the next page the word umoja, unity, which is the first pillar in the seven pillars of Kwanzaa.

Against a night sky filled with constellations, the words in white continue. “When the days were long and the sun was hot; when babies were born and taken from their mothers; when the sons left their families and the fathers were sold away . . . the people fought for land, for freedom, for a tomorrow unknown.” Nat Turner and Harriet Tubman are mentioned, the beginning of a long line of important Black people who have pushed for change. Kujichagulia is the second pillar of Kwanzaa: self determination.

Zoboi drops many names along the way, most familiar, some not, as the slaves are freed and as they move north and west with their new freedom: Sojourner Truth, Marcus Garvey. Madame C.J. Walker, Garrett A. Morgan, and George Washington Carver, to name a few.

Many cultural elements are mentioned but not explained—“jump the broom, cakewalk and jive, ring shout and Lindy Hop, Charleston and jitterbug their sorrows away.”

Umija, collective work and responsibility is the third pillar.

Koboi mentions white-hooded strangers, and the art shows flames behind a huddling family. She mentions “low-hanging strange fruit—lynched fathers and mothers, sons and daughters,” a line from a Billie Holiday song.

Then the story moves on to Dr. King, Malcolm X, and Martha and the Vandellas of Motown fame, Michael Jackson and his brothers, Aretha, Smokey and Stevie, Diana and Nina. “Marvin Gaye asked what’s going on and the people replied by painting this world with blues deeper than the ocean, as they swayed to a new rhythm—a funk, a disco, a hip-hop born out of jazz, born out of gumboot dance, born out of djembre drums.”

Koboi metions a number of poets and describes rap that was born in the Bronx. The pillar called kuumba is creativity.

Then Barack Obama gets a shout-out, along with his family. Then the killings of innocent black boys and men at the hands of police. The story ends with the pillar of faith: Imani.

The bright art is as strong as the text, bringing the words to life in bold colors and rich details, including metallic specks of gold on the cover. The illustrator uses dark backgrounds while the people are being turned into slaves. The text switches from white on dark background to black on light backgrounds. Only two pages are predominantly white before the back matter.

A two-page author’s note includes the seven pillars of Kwanzaa. A four-page timeline is followed by a page for further reading.

The People Remember covers the most ground of any picture book out there regarding Black history. Many terms are not defined or explained within the text, so it will become a great teaching tool for all ages.