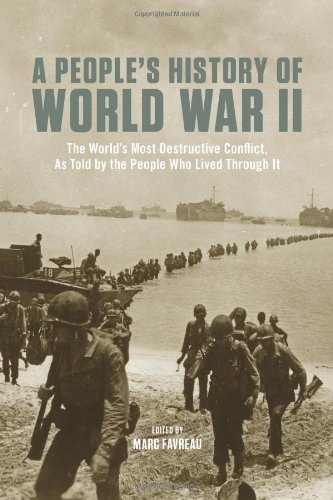 “Beyond classrooms, general readers will likely find a few of the selections compelling and the rest boorish and preachy. On the brighter side, leftist antiwar activists and Professor Hobsbawm will judge this work brilliant.”

This latest installment from the People’s History series—founded by the late Howard Zinn and continued by editor Marc Favreau—is a collection of first-person accounts of World War II. It includes some interesting and moving selections.

However, the publisher’s claim that this small book provides a “major new resource for classroom teachers” and brings to life the “full range of human experience during World War II” is a stretch, especially considering that most, if not all, of the selections are excerpts from previously published works—but because of poor documentation of those sources, it is difficult to tell.

There are some very compelling first-hand descriptions of various phases of the conflict. Unfortunately, rather than offer the wide view of human experience that he claims to intend to provide, editor Mark Favreau makes a transparent effort to include only articles that support the publicly proclaimed activist agenda of the publisher, The New Press.

The raw history of several selections—such as an interview with a Japanese-American serviceman whose family was taken to U.S. internment camps during the war; or excerpts from the testimony of Elisabeth Freund, a Jewish woman desperately trying to emigrate to the U.S. to escape the Nazi death camps—are cheapened by their use serving Mr. Favreau’s narrow viewpoint.

These aforementioned interviews and excerpts are intermixed with the writings of socialist activists such as self-styled communist revolutionary Nelson Peery and Marxist historian Professor Eric Hobsbawm. In fact, the largest selection in the book is a narcissistic rant from Hobsbawm’s autobiography that is primarily concerned with his activities in support of Communism, how much smarter he was than the other men in his unit, and —given his superior intellect—how frustrated he was at not being put in charge of something important or, for that matter, anything at all.

Mr. Favreau does include some of his own commentary. His prose is eloquent, but it is sparse, offering only a couple of paragraphs at the beginning of each major section and one or two sentences explaining each excerpt. As such, he offers little in the way of setting or context for his selections.

In the case of the Elisabeth Freund testimony, there is no explanation at all as to what previous work it was pulled from or if this is its first major publication. There is no indexing and no bibliography, leaving the book completely unsuited for the type of academic use to which it aspires.

In short, this is a biased collection, poorly compiled, and entirely serving the—unidentified as so but clearly—leftist/activist agenda of Mr. Favreau and The New Press. It is not scholarly in its presentation nor does it present new information. It’s only use in an academic environment might be as one part of a survey of political viewpoints on World War II, but it most certainly does not achieve the wide range that would allow it to stand on its own.

Beyond classrooms, general readers will likely find a few of the selections compelling and the rest boorish and preachy. On the brighter side, leftist antiwar activists and Professor Hobsbawm will judge this work brilliant.