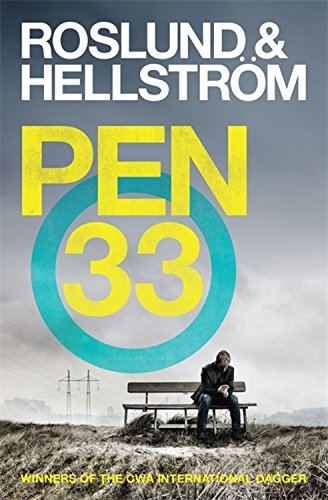 Pen 33 is the first book in the wildly popular Ewerts Grens series, available to American readers for the first time. Although later books in the series such as Three Seconds are New York Times bestsellers, American readers now have the opportunity for a formal introduction to Roslund’s and Hellstrom’s overweight, rude, but very gifted Swedish Detective Superintendent Ewerts Grens.

It is a long overdue introduction, and one hopes the other books in this gritty and frequently chillingly realistic series will follow. While Ewerts Grens is not a person one might choose for a dinner companion, he is definitely the person one would for hunting down the killer of a beloved friend or relative.

Bernt Lund is a predatory monster masquerading as a human being. A child molester and serial killer with a sickening ritualistic compulsion to lick the feet of his young victims, Lund has no redeeming social value. “He can’t be changed. He doesn’t want to be changed. He is who he is.”

During Lund’s last stay at a psychiatric hospital he had been diagnosed with a mild mental disorder. It is a mark of his psychopathy that he is able to appear normal. That is something that prison transport driver Ake Andersson knows.

“He’d transported this one at least six times before . . . He seemed normal. They always did. To other people. Short, not fat, a crew cut, quiet. Completely normal. The type of man who raped children.”

Lund calls Andersson a pig one too many times, and Andersson snaps. He hates child rapists, and after 32 years of driving scum from prisons to courts and back again, he can’t take it any more. He stops the transport van and leaps out, but Andersson has miscalculated the feral viciousness and forethought of Lund.

Lund beats Andersson nearly to death with his chains and escapes, a beast hungry for more little girls.

Principle Prison Officer in charge of Aspsas Prison’s Department for Sexual Crimes, Lennart Oscarsson knows how dangerous Lund is, and knows also that he will be blamed for the child rapist’s escape.

Ewert Grens also knows how dangerous Lund is, perhaps even better than Lennart Oscarsson does. Ewert had interrogated Lund after the predator’s latest murders. “I tried to look him in the eye. It was impossible. He looked above me, beside me, through me . . . people look at each other when they talk . . .”

Of course, Bernt Lund is not “people” in any sense of the word. Ewert Grens know it; Sven Sundkvist, Ewert’s favorite detective, knows it. Most of all Fredrik Steffansson, father of Marie, one of Lund’s nine-year-old victims, knows it.

Lund will kill again if he is not quickly found. Ewert knows it, and so does Fredrik. When Lund is not immediately caught, he does kill again. Fredrik decides to hunt the rapist himself; more than that, he plans to kill him in order to save other little girls.

Fredrik tracks Lund to a nursery school and shoots him. He feels no guilt. “What was right was right.”

He is immediately arrested and charged with murder by an ambitious prosecutor who plans to ask for a life sentence. Ewert believes that a lesser sentence is warranted, but he fails to persuade the prosecutor. “We have to show every single citizen that if you act as Steffansson did, you’ll be locked up for life. Even if you are a grieving father.”

Fredrik is acquitted at his first trial as did public opinion. It was self-defense just as Fredrik’s lawyer claims. There is proof that Lund was planning to abduct and murder two more little girls. Fredrik’s actions save their lives.

The conundrum that is the crux of the book is whether Fredrik’s actions are defensible when his acquittal sets off other attacks on sexual predators. If the lead prosecutor had accepted the mitigating circumstances of Fredrik’s case and asked for a shorter sentence, would the resulting tragedy been avoided? If the lead magistrate not appealed the acquittal, would Fredrik been allowed to live out his life such as it was?

On the other hand, if the prosecutor asked for and received a shorter sentence would a harmless man in a small Swedish village still be alive? And if a long term prisoner who hated child rapists had not misunderstood an overheard conversation, would the tragedy been avoided?

One human decision leads to another and another, with the authors leaving the decision of what is the right and wrong of the case against Fredrik. Pen 33 is a disturbing novel as it illustrates that events cannot always be seen in black and white.

Pen 33 is for fans of realistic crime novels, certainly not for those who prefer a gentler story. A Publisher’s Note at the front of the book warns that “This book portrays sexual violence involving minors.” Readers should heed it.