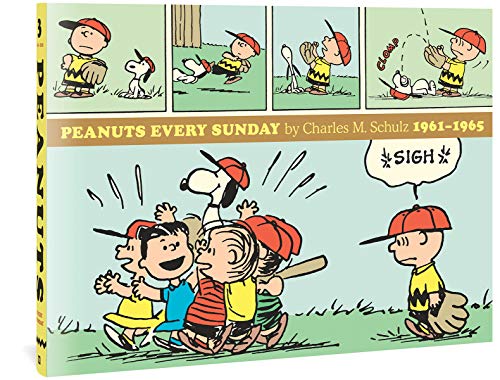 Over his 50-year career, Charles Schulz, the creator, writer, and artist for Peanuts, would write and draw close to 18,000 strips. It was a remarkably constant run filled with numerous high points across the decades. Still, many who love the strip believe that, in the sixties, Schulz was at his absolute best.

Offer any fan of the strip a copy of Fantagraphics’ Peanuts Every Sunday, 1961–1965 (Vol. 3) by Charles M. Schulz and they would be hard pressed to argue any different. This is the sweet period in the world of Peanuts. It is right before the strip becomes a household name and morphs into a commercial and entertainment juggernaut. As the decade progressed, the strip would grow so famous and beloved that in 1969 NASA would name lunar craft modules after Charlie Brown and Snoopy.

Reading the Sunday pages collected in Peanuts Every Sunday, 1961–1965 (Vol. 3) it looks as if Schulz was having the time of his life. By now he had now been drawing the Peanuts characters for over ten years. Charlie Brown, Lucy, and the gang are no longer strangers to him. He knows how they move, he knows how they talk. They are as close to fully formed as they ever will be.

While many love the platitudes and philosophical underpinnings found in so much of what he wrote, this collection makes it clear that Schulz was also a master of slapstick and action. It wasn’t unusual for a Sunday page featuring a dozen panels to contain no conversation or, at the most, a single word balloon at the end of a page. His mastery of the comic format is visible in every panel he drew.

On September 22, 1963, the Sunday page features Charlie Brown visiting Lucy in her office as he questions the purpose of life. It is 11 panels packed with conversation that, with little effort, leads to one of those perfect Peanuts moments which is funny as hell but somehow, deeply insightful as well.

Then, in the following week’s page he moves in the opposite direction by constructing a silent, 12-panel masterpiece in rhythm and pace that would make Chaplin proud.

Dated September 29, 1963, the Sunday page opens with Snoopy sitting quietly under a tree. A single leaf falls. Soon Snoopy is on the run from the leaves that continue to fall. Using just a few lines for emphasis around his eyes, Schulz shows us every single thing that the dog is thinking.

Realizing that he has outrun the leaves, the pooch stops to taunt the leaves from the safety of distance. Suddenly we see Snoopy running in panic as from nowhere, a large group of leaves bursts into the right side of a long, open frame. The strip closes with him sitting on top of his doghouse angrily saying to himself “STUPID LEAVES!”

With two small black dots that pass for his eyes Schulz captures the depression felt by Charlie Brown. By adding two small lines to the side of Snoopy in profile, we can easily laugh at the frustration he feels. There is a gift in the way that Schulz could draw a simple, single line and imbue it with so much meaning.

As much as people love to believe that Peanuts was a kind and gentle strip, Schulz filled it with plenty of cartoon violence. He was also happy to add a note of physical absurdity to the proceedings when it was called for.

When Lucy makes a snowball too large for her to throw, Charlie Brown, Schroeder, and Linus mock her as they pass. Using the snowball as a bowling ball she takes out a couple of her loud-mouthed friends. As Charlie Brown, the only one left on the ground watches, she picks up another oversized snowball and as she knocks him into the air says, “I never thought she would pick up the spare!”

As with the best of Peanuts, there is much more than occasional forays into cartoon violence, fantasy, or absurdity. Schulz never forgets the psychological damage that others inflict on us. Intentional or not, emotional damage can run deep in the world of Peanuts.
Lucy knows full well nothing means more to Linus than his blanket. If she knows this, then why does she cut biblical figures out of Linus’ flannel comfort? And then display them for him?

This is a prime period for Lucy. Her fussiness and attitude know no boundaries, and she often seems to be blissfully unaware of the damage she causes. After coming in from the outfield for a “little conference,” she gets caught up in the view found atop the pitcher’s mound. When Charlie Brown finally yells “Get out of here!” she walks away complaining of his crabbiness.

This period of Peanuts Sunday pages draws to a close just as the strip is about to take over the world. On April 9, 1965, TIME featured Charlie Brown and the gang on the magazine’s cover. At the end of the year, on December 9, the half-hour television special A Charlie Brown Christmas would debut on CBS. Already popular, suddenly Peanuts would be on everyone’s mind.

This anthology isn’t the “innocent days” of Peanuts. The strip has never really been “innocent.” The kids in these strips can be surprisingly mean. They yell at each other, footballs are yanked away at the last second, and Linus knows full well that his blanket can make an extremely effective slingshot—especially for snowballs.

On Sundays, Peanuts ran as a half-page strip. Featuring bright color and deep lines, Fantagraphics has reproduced these pages exactly as they were first seen years ago.

This is a brilliant run of Peanuts just as the strip was at the edge of superstardom.