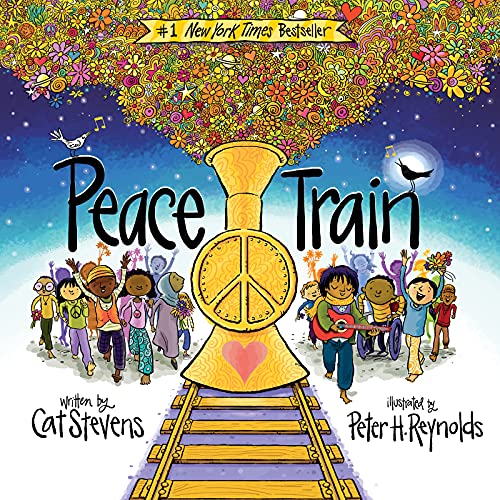 “A joyous anthem that calls out to everyone to sing out for peace, Peace Train invites all to grab their express ticket and get on board to create worldwide unity.”

Celebrating the 50th anniversary of Cat Stevens’ iconic song “Peace Train” from his 1971 Teaser and the Firecat album, Rock and Roll Hall of Fame and Grammy-nominated singer-songwriter Stevens joins New York Times bestselling author-illustrator Peter H. Reynolds to create this lovely children’s book by the same name. Featuring the lyrics of Stevens’ song, the book depicts a boy and his guitar, accompanied by a “cat” and two birds of peace (one white and one black) as they join others from around the world to ride on the Peace Train.

Peace Train is reminiscent of the Beatles’ “Yellow Submarine” with a locomotive that emits a plume of grooviness. Indeed, as readers open the book they are immediately greeted by brilliantly colored, retro endpapers of hearts, flowers, leaves, planets, and peace signs—images carried throughout the book—including the Train’s playful steam. Depicting children of the world, of all colors, races, (dis)abilities, dressed in the clothing of the era complete with bell-bottomed pants and T-shirts with peace signs, the artwork invites all to jump on board to take part in global peace.

Peace Train is a rallying cry for the country and world to right itself by coming together to form community for the greater good. It is hopeful, “Now, I’ve been happy lately, thinking about the good things to come, and I believe it could be something good has begun. Oh, I’ve been smiling lately, dreaming about the world as one. And I believe it could be someday it’s going to come. ’Cause out of the edge of darkness there rides a Peace Train.” It is also questioning as well as encouraging, “Why must we go one hating? Why can’t we live in bliss?”

In his Author’s Note, Stevens describes his inspiration for writing the song, now book—a message as relevant today as it was 50 years ago: “The heart is where peace begins, so fill it up with as much love as you can and let it spread outward until other people can see and feel it— be like the sun in the shadows. Jump on board the Peace Train and let’s travel together.” In fact, in his personal life, Stevens (Yusuf—after embracing Islam) started a Peacetrain initiative (2020) which, together with other peace partners, delivers relief, medical aid, and education globally.

A joyous anthem that calls out to everyone to sing out for peace, Peace Train invites all to grab their express ticket and get on board to create worldwide unity. In this book for children, Stevens is speaking directly and specifically to today’s young activists like Greta Thunberg, to whom he dedicates Peace Train, along with “all the children of this beautiful world.” And as a recipient of a World Social Award and Man of Peace Award, Stevens continues to motivate and invigorate, whether in song or humanitarian efforts, cheering on others to do good for the world.