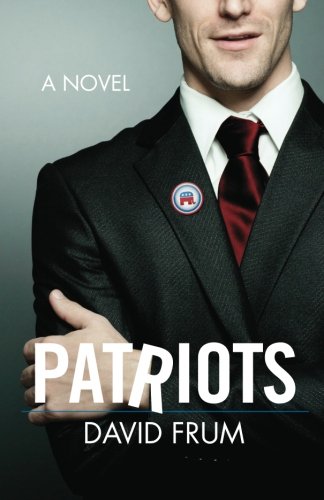 With another presidential election year upon us, the workings of the vast political machinery once again revs the engine and surges forward.

Barack Obama and Mitt Romney figuratively stand upon rather rickety, jerry-rigged party platforms, funded and constructed by hordes of supporters and cotravelers in an effort not only to promote their man, but also to forward the ideals that each man purports to stand for.

These ideals are, more often than not, little more than branding devices, marketing slogans used the same way they might be by any self-respecting consumer product.

Each ideal stands for something else, each utterance on the stump has multiple meanings, each strategy many facets. As a result, there’s a lot of pleasure and pain, clarity and confusion, hope and disappointment in this mix. Victories and defeats are extreme and often final.

David Frum is well qualified to guide us into this febrile pit of self-interest and savage power gamesmanship. A former speechwriter for George W. Bush, a commentator for the “National Post” and “The Week,” frequent contributor to Newsweek and the Daily Beast, he is also author of an unsurprisingly pro-administration “insider” look into the younger Bush’s reign, as well as coauthor (with conservative heavy hitter Richard Perle) of An End to Evil, arguing in support of the disastrous Iraq war.

With this conservative, Republican-drenched background, it is interesting where Patriots, Mr. Frum’s first novel, goes.

The central character is Walter Schotzke, scion of a mustard dynasty with a CIA-hero dad and big E establishment foundations. He starts off as a fairly bumbling and empty figure, needing some form of meaningful employment to qualify for the weighty inheritance that sits in a trust administered by his dowager of a grandmother.

With the help of his smart, sexy girlfriend Valerie, Walter stumbles into the conservative political machine, first as a lowly staffer for the avuncular Senator Hazen, then as something of a right wing high flier.

His financial good fortune seems to be mirrored in his stellar political journey as he quickly rises the ranks and becomes an observer of, and participant in, the various dark arts that swirl behind the scenes inside the Beltway as a new president starts changing his spots.

The new president—wheelchair bound war hero George Pulaski—was elected on a “Constitutionalist” ticket (i.e. Republican), but is lurching leftward toward the “Nationalists” (Democrats).

A progressive, bipartisan plan for economic recovery generates an uproar from staunch Constitutionalists. A 10-year war with Mexico, seemingly the ultimate conclusion of the Reagan era Drug War, is a mirror of that with Iraq, the compelling twist the presence of some 30 million Mexicans in the U.S. The Constitutionalist/Republican base (read: Tea Party) arises and a backroom political war gets underway.

Walter’s journey leads to a watershed realization that politics is not what it appears. While his questioning is refreshing, it is superficial and doesn’t appear to lead to any redemptive point.

Throughout, he embodies the kind of establishment rich kid, who falls backward into opportunity and recognition, scores the perfect partner, and is someone who hardly rises above the slacker he seems to really want to be. Rather than someone who interprets the problem, a narrator to whom we can relate, Walter is the problem.

As such, we never warm up to Walter, and as our interlocutor he is limited. Other characters come and go with the unrelenting march of a Turgenev or Tolstoy, names piling on names, each representing something conceptual, rather than a living, breathing thing.

Mr. Frum can clearly write. But like many who earned their chops in journalism and commentary, he struggles at times to hide the seams. Seemingly important plot lines and political strategies have frayed edges. Some, like the intriguing Mexican war, lead to narrative cul-de-sacs. Less a perfect whole, Patriots is more a granny’s quilt.

Also, a multitude of syntax, grammar, and other annoying editing lapses make the read more stop-start than is surely intended.

Fortunately, the range and depth of Patriots rises above these technical divots. As a fictional behind-the-scenes primer on the current U.S. political system, it is fascinating and realistic. The spins and counter spins, the less than grounded characters, the hollow center beneath the facade of so much of the pap passing for political discourse—all are faithfully exposed and often skewered.

Mr. Frum lines up his biggest guns on the extremes found in the current media pantheon. The nasty Patriot News cable network (read: Fox) is eviscerated, its talent pilloried.

Drumming up fear and creating political mileage out of such tricks as manufactured demonstrations, or openly playing the game of the right’s more nefarious spin doctors, the right-wing media comes across as band of sycophants and psychopaths with unsafe levels of power and influence. Realistic indeed.

Most interesting is Mr. Frum’s underlying statement on contemporary politics, particularly that of the Right. As a former Republican leading light, Mr. Frum has taken the opportunity to undermine the stances his own party—and the political system in general—have taken.

Perhaps the author, like his Walter, has seen too much and become disillusioned. As a more proactive, career advanced, and engaged character than Walter, David Frum is in a position to focus a spotlight on the dark recesses of U.S. political culture. Patriots achieves that aim with a sharp and educated arrow.