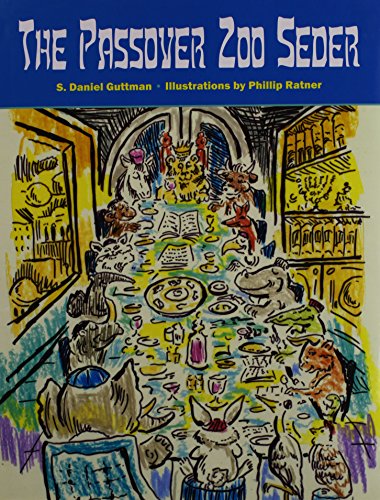 OK. So I feel like a lapsed Jew regarding what I am about to say. Or rather, scream:

ISN'T THERE ONE OTHER RHYME SCHEME BESIDES DR. SEUSS’S THAT AMATEUR WRITERS CAN STEAL FOR USE IN THEIR PICTURE BOOKS?

Had S. Daniel Guttman, the esteemed president of a management consulting company thought to actually consult someone who is practiced in the art of writing and publishing for children, The Passover Zoo Seder might not have made me so mad. Because, truth be told, the concept is cute: feature a Passover seder starring animals who are much better comported than their wildly misbehaved human counterparts.

Then S. Daniel goes and messes it all up.

First, the Seussian rhyme scheme. That’s, like, the first rule in publishing: Thou Shalt Not Write in Seussian Rhyme Scheme or Thou Shalt Be Beaten Mercilessly About the Head. Ted Geisel used his wacky rhyme scheme incomparably well. His books have been bestsellers for decades now. Why even bother to do what has already been done over and over and over by some other writer/illustrator—especially when it is 99.99% guaranteed that your version will suck supremely compared to Dr. Seuss’s?

Then S. Daniel goes on to use alliterative names for the anthropomorphized animals (Justin J. Jaguar, Lola Llama, Norman the Gnu—okay, so that last one is particularly bad, but you get the idea). Who can take anyone seriously, much less an animal, with a name like Pithy Python or Antsy Anteater?

Then Mr. Guttman proceeds to torture the English language to make his stolen rhymes “work:”

“Anxious animals at the Great Zoo,
Fussed and wondered, ‘Whatever to do?’
With Passover near,
Queer sighs hit your ear.
Their Haggadahs were worn through and through.”

Oy vey zmeer. Like, I don’t even know where to start. All I know is that if I did start, I would end my screed with something about the line starring those “Queer sighs” and the ear-boxing they so blithely engage in.

Let’s forget the words for a moment and concentrate on the art. The animals, illustrated by Phillip Ratner in pen and ink colored in with what appears to be crayon or oil pastel, are uniformly devoid of personality and expression. No, wait, I lied: Sitting next to a fox at the table there’s a solitary hen who is supposed to look sad but instead appears supremely annoyed, as you would be if your children were about to be sacrificed on the altar of ancient Jewish custom:

“The salt-watered eggs of the hens were divine.
Most chickens were sad, but the foxes felt fine.
Though termites liked matzah, the taste was so good.
Their gourmets would have added a sprinkling of wood.”

Gott in himmel! Is there nothing redeeming about The Passover Zoo Seder?

YES! The Passover Zoology also known as the appended dictionary at the end of the book is three pages of pretty funny stuff—especially if you’re a fan of Jackie Mason (or old enough to know who he was/is). THIS is where S. Daniel Guttman truly shines:

“Seder: Literally means a systematic or orderly event and refers to the Passover meal and its accompanying Haggadah recitation. In many homes, Seder is an oxymoron.”

“Hadleek Nair: The lighting of the candles by the matriarch, which ushers in every Sabbath and holiday. Typically, not enough light is shed to illuminate solutions to family squabbles.”

“Matzah: The original fast food, a cracker on steroids. The Israelites rushed out of Egypt without their automatic breadmakers. Given the hot pursuit by the Egyptians, pumpernickel with raisins was out of the question, so the Israelites only had enough time to produce unleavened flat bread, which, in turn, thousands of years later spawned the cream cheese industry.”

Ach! Turn off the nightlight already. I am a firstborn. Would it be sacrilegious of me to BEG the Angel of Death to PLEASE slay me and put me out of my misery?