Paris Noir: African Americans in the City of Light 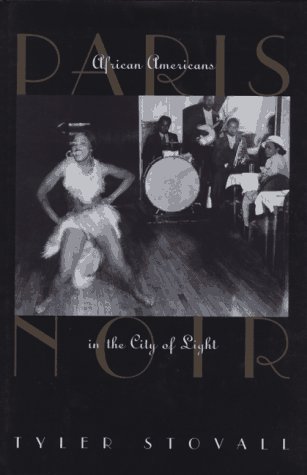 “Paris Noire is best read as just another light romance novel that just so happens to take place in an exotic locale and at an important time in history.”

Those words certainly describe the premise of Paris Noire: a novel about black immigrants (noirs) in post-World War II Paris, the city of love and light, liberated, ripe with possibility and teeming with the tension that arrives with change.

According to the book’s publicists, “Set against the turbulent backdrop of wartime France, Paris Noire is a dramatic and engrossing novel that brings to vivid life the remarkable people once relegated to the fringes of history.”

Who wouldn’t want a potential page-turner like that in their stack of to-be-read books?

Fifty-year-old Marie-Therese Brillard, a mulatto originally from France’s Caribbean colony of Martinique, survived the German occupation of Paris. The future looks bright until she learns that her grown children, Collette and Christophe, both quadroons because of Marie-Therese’s marriage to a white Frenchman, have become involved with white French lovers, Jean-Michel and Genevieve.

Genevieve’s husband Alain-Hugo fought with the Resistance and returns home around the same time as the liberation. And a black jazz singer named Glovia Johnson, seemingly patterned after chanteuse Josephine Baker (who received the Croix de Guerre for her resistance work), inserts some friction into the narrative when she seems interested in the same black American soldier called Monsieur Lieutenant. Glovia parties a lot and gallivanted about Paris with at least one German lover. Marie-Therese attends Glovia’s parties, usually in the capacity of assisting with serving food and drinks.

Their tale plays out against the stunning backdrop of Paris, beginning with the liberation of Paris on August 25, 1944 by Allied forces. Occasional glimpses of well-known Parisian landmarks pepper the story: Sacré-Coeur and the Madeleine and the metro and the Arc de Triomphe.

Like an elaborate recipe for a rich chocolate cake, all the ingredients sit on the table, ready for the mixing.

Unfortunately, the mix of characters and setting just never rise enough to set off the sparks that make a reader want to keep turning the pages.

Except perhaps for Christophe, deeply involved in his affair with the married Genevieve, Author Howard does not imbue any of the characters with the complexity that a novel demands. A clichéd combative relationship between mother and daughter becomes wearisome very quickly. Collette gets the sharp edge of Marie-Therese’s tongue and her lover, Jean-Michel, rarely appears.

A contrived and slightly loony plan to liberate Genevieve from the clutches of her husband backfires and ends in tragedy. The aftermath of that episode furnishes Paris Noire with its most realistic and truthful moment, injecting another aspect of “noir” into the story, along the lines of Dashiell Hammett, Raymond Chandler, Charles Willeford, and Jim Thompson.

What’s missing in Paris Noire, besides well-drawn characters, lies with the atmosphere that prevailed in France after the Germans left. The Milice Française collaborated with the Germans. French citizens hunted down collaborators and shaved the heads of women who slept with German officers. Gaullists, Communists, and Socialists formed resistance cells during the occupation and vied for dominance after the Liberation. Paris was a very dangerous place to be. Little of this ambience permeates Paris Noire.

The purple prose sometimes oversteps itself, too: “Whenever she got excited, Genevieve’s amber eyes sparkled shades of burnished gold like the sun setting on a smoke-filled November day over the Sacré-Coeur.”

But one of the most glaring deficiencies of Paris Noire comes at the very beginning of the book, calling into the question the depth of the author’s research.

When Allied troops marched into Paris on August 25, 1944, none were black. Not even the Africa Corps, primarily composed of men from the West African nation of Senegal, the Tirailleurs Sénégalais, marched. Yet in Paris Noire, Ms. Howard creates a scene where they figured prominently in the parade: “The Senegalese? You see the Tirailleurs Sénégalais?” . . . He jostled to get a look at the kepis-wearing black regiment. Word had spread through the immigrant community about these fez-wearing fighting men whose bravery had made them the real heroes in the battle for France.”

The truth of the matter lies in the blatant racism of the era. DeGaulle demanded an all-white regiment at the front of the line. A film, Les Indigènes [Days of Glory], portrays the wartime situation of colonial troops, who suffered more at the hands of the racially intolerant Germans, considering these men to be subhuman. Their story still remains to be told in full.

It’s too bad that Ms. Howard did not use material like this as a basis for the story line in Paris Noire. As it stands now, Paris Noire is best read as just another light romance novel that just so happens to take place in an exotic locale and at an important time in history.