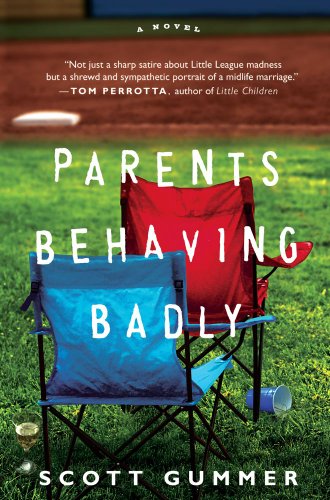 There’s enough pressure on parents to hold the perfect birthday party for a six-year-old these days, but when someone drops dead at said celebration, the goody bags are probably not going to make up for the unhappy ending.

The deceased turns out to be the beloved baseball coach of Palace Valley High School, Harvey Harold Holden. “Coach” was also the father of Ben, who is just hitting his midlife stride and trying to settle back into small-town life in California after moving from Manhattan with his wife, Jili, and their children.

For Ben, the death of his baseball legend father brings back difficult memories of being the son who didn’t want to play the game. In fact, in 50 years of coaching, only one kid had walked off the field for good—and that was Ben.

“I felt like I was at the funeral of a complete stranger,” said Ben. “All those guys who played for him all talked about his sense of humor, but I don’t remember Coach as funny. Crass, yes, but funny? I close my eyes and I cannot picture him smiling. I cannot remember one hug, not a single kiss.”

As Ben deals with the loss of his father and his two outrageous and über-competitive siblings, Nancy and Fred, he and Jili are forced to squarely face up to what their life has become. They struggle to connect to their two technology addicted children and deal with their long marriage and issues of infidelity.

Being back in Palace Valley, Ben must deal with old high-school slights as well as constantly running into washed-up jocks and girlfriends at Starbucks—which is often uncomfortable and funny at the same time.

It’s when Ben is reluctantly recruited to coach his son’s Little League team that the fireworks begin. Pushy parents, swearing boosters and Cyn, the sultry thong-wearing team mom with the serpent tattoo, all come at Ben like a 90-mile-an-hour pitch.

“That’s all this is,” Ben said, motioning to the entirety of the baseball complex. “This is the grade-school playground all over again—the posturing, the intimidation, the bravado.”

If parents of young athletes can’t find the humor in the pages of Parents Behaving Badly, it’s because they’re too far out in left field to see it. Those readers might want to come in a little closer, because this is a good read, and you might need to lighten up on your kids and yourselves to find the humor in it.

Every mother and father of every child who has ever participated in youth sports can relate to the obnoxious characters, the overbearing team moms, and the self-important youth coaches. Scott Gummer has obviously worn a “Coach” shirt himself, and the fact that he doesn’t take the game or the participants too seriously is the key to this winning book.