The Parade: A novel 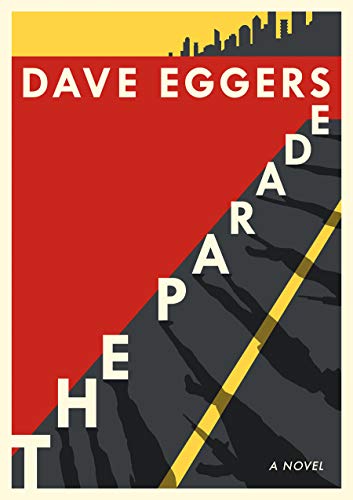 “The Parade is a deeply felt book that defies easy labels.”

On the cover of Dave Eggers’ suspenseful new novel, The Parade, the letters of the title ascend a newly paved road, striped down the middle with two solid yellow lines. Who hasn’t relished the cushiony expanse of a smooth road after enduring miles of under-construction rumbling? Imagine your satisfaction if you lived in a war-torn country, where the previous trail is so roughshod that you don’t have access to doctors or medicine or goods to buy or sell. The urgent push to pave such an essential road, to unify north and south, in some unnamed country, makes up the central plot here.

Why the urgency? A government-sponsored parade is scheduled upon the road’s completion. Obstacles ensue, of course. Life and death sometimes hang in the balance. Yet as we turn pages, we’re compelled more by that deadline—by a road project!—which is testament to Eggers’ expert skill at point of view.

Four, the experienced man in charge of the project, is single-minded in his drive to finish on time; thus, so are we. His free-spirited assistant, Nine, connects with everyone he meets, disappears on adventures, and lives in the moment, qualities that might otherwise evoke admiration and sympathy. But since Four views Nine as a nuisance and dangerously irresponsible, so do we.

Yes, the characters are named Four and Nine. For security reasons. A man they meet on the road is named Medallion. Because that’s what he wears. His cousin is named Cousin. Moreover, as mentioned, the country is never named, the war is never identified. Plans for the parade are never quite described. Is this a real parade? Or are we in Shirley Jackson’s “Lottery” territory? Because of these literary conventions, the labels allegory or fable might spring to mind, but those labels come with so much baggage. Resist that.

Instead, lose yourself in the sensory precision of this world, as offbeat Nine might advise, which is ironic, since every passage is rendered through Four’s eyes: “The night was quiet and soaked in black. There was no electrical grid in the region, so the nights were unsullied by human striving. Four looked up to the moonless sky, only a shard of starry space visible through the cloudcover.”

The Parade is a deeply felt book that defies easy labels. This is a book you can finish in a single sitting. And you will.