The Pandora Room: A Novel 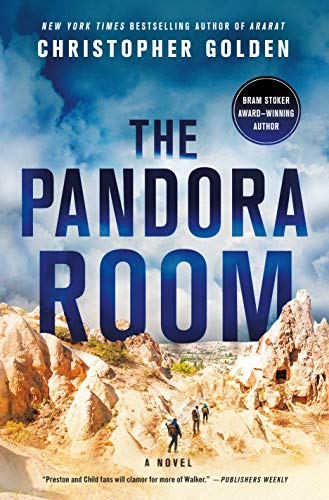 “A skillful blending of paranormal horror with a political thriller.”

In Amadiyah, Kurdistan, archeologist Sophie Durand and her crew have discovered an underground city she dubs Derveyi, or “beneath,” in which is a room reputed to hold the box given by Zeus to Pandora, in reality an urn containing all the sins of the world.

In Greenland, Ben Walker is ordered from his latest study of the permafrost by the Defense Advanced Research Projects Agency and ordered to Iraq, to Sophie’s dig.

“Walker had never liked working for DARPA—he didn’t appreciate weaponized science—but he had a lifelong fascination with mysteries and a thirst for explanation. When things turned out potentially dangerous, he preferred they be in his own government’s hands than someone else’s.”

Sophie tells Ben of her discovery, and the story of Pandora, but there’s a twist; in this version, Zeus gives two urns, one to Pandora and one to her sister Anesidora. One urn contains all the woes of the world, the other the cure.

“Walker studied the jar. “One for blessings, the other with curses. If one has seeds and medicines, the other could be full of diseases and viruses of the ancient world.”

Dr. Tang shifted uncomfortably. “I can’t speak for the rest of you but I’m absolutely terrified.”

Shortly after Ben’s arrival, a battle begins above Derveyi. Native troops against US forces, each one wanting possession of the urn.

Trapped below, Ben and Sophia realize one of her team is colluding with the Iraqis, but their main concern is to somehow get out of the city without being killed by friendly or unfriendly fire.

When someone opens the urn, those trapped in Derveyi begin seeing ghosts, the spirits of the city’s long-dead inhabitants, re-enacting their many crimes of violence against each other. Soon, something worse happens—those spirits begin to possess the trapped team members.

Chaos and death ensue as friends and colleagues turn on each other.

Sophie and Ben’s only hope is to get the surviving members out before the curse of Pandora’s Box kills them all, and to do that, they must take the urns, and the curse and cure, with them.

The Pandora Room is a skillful blending of paranormal horror with a political thriller.

Both Ben and Sophie are written as likable characters, determined to carry out their assigned duties while attempting to protect their find as well as their associates. Each team member is carefully characterized and his/her background given in such detail that even the most minor character is well-delineated and made into someone the reader will care about and hope for their survival.

The detail in describing both the Greenland terrain as well as the topography of Amadiyah and the underground city is realistic and so graphic one can truly imagine the burning cold of the north as well as the suffocatingly dry heat of the desert. There’s also a weaving of myth versus reality in Greek legend in the interpretation of the inscriptions found in Derveyi that would posit an interesting debate in real life.

The same descriptive diligence is given to the escape scenes inside Derveyi. There the dark and claustrophobic effect of being trapped underground with a group of people possessed by the spirits of the dead is played against the fact that only layers of earth separate the inhabitants from a raging battle above them, and either way, imminent death appears the only outcome.

While no mention is made that this is the first in a new series, The Pandora Room has all the makings of such, and if so, its arrival for the reading public will be well received.