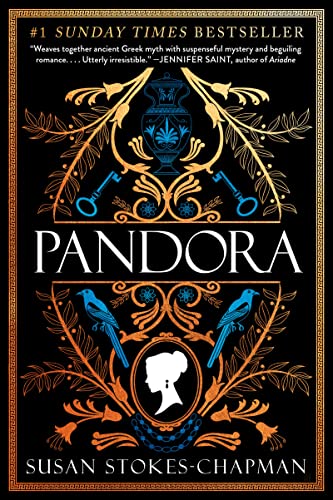 “Stokes-Chapman’s writing is strong; her story travels a direct line from beginning to end with no distractions or excessive backstory.

Pandora “Dora” Blake is a young woman, orphaned at an early age, and taken in by her uncle, Hezekiah. She dreams of a better life than the one she is living. Hezekiah is a greedy man who took over his brother’s antiquities shop after his death, and often bemoans the fact that the child, Dora, came with it.

The story is founded on dreams—Dora’s dream of creating jewelry for the wealthy women of London society; Hezekiah’s dream of immense wealth, obtained through illegal means; and Edward Lawrence, a young man driven by his dream of membership in the prestigious Society of Antiquaries, a dream that seems to evade him at every turn.

The story begins with a strong hook for the reader to latch onto when a mysterious Grecian vase is retrieved from a sunken ship and delivered into Hezekiah’s possession. He secretes it in the basement of the antiquities shop where only he has the key.

Dora soon realizes there is something of importance in the basement and determines a way to obtain the key from her uncle. She discovers the vase with its unique pictures of Greek myths. Her skill as an artist is to copy the four images from the vase, thinking she can use the material in her jewelry creations.

A mysterious old man, encountered in a tavern, drives Edward toward Dora’s realm, seeking her assistance to achieve his dream. An unexpected encounter with the old man at the antiquaries shop drives Dora toward Edward, hoping he can help her learn more about the history of the vase.

At their meeting, plans start to form in each of their minds that their dreams may be achieved.

The story takes a mysterious turn when it is learned that the men hired by Hezekiah suffer injuries that cannot be cured. The delivery men try to convince Hezekiah that the vase is cursed and is the cause of their injuries. Hezekiah refuses to believe them even though the injury he sustained when the vase was delivered only worsens with each day.

Stokes-Chapman brings the tale into hope when Edward brings material he has scraped from the vase to the Society of Antiquaries to be tested for age, while Dora experiences a chance meeting with Lady Latimer, a society woman who admires Dora’s jewelry creations and solicits one to be made for her.

But Stokes-Chapman moves that hope in a darker direction when Hezekiah learns that Dora has discovered his treasure and he is forced to loan the vase to Lady Latimer for a soiree. Hezekiah must move his plans more quickly before his plans are dashed.

The climactic scene is delivered with strong tension where the conflicts between and among the characters has the reader flipping through the pages unable to put the book down until the ending is reached.

Stokes-Chapman develops her characters and their motives with clarity. Dora, as the protagonist, grows as the story unfolds, displaying strength that she did not know she had. Hezekiah is a bad number right from the beginning—an antagonist one learns to dislike from the point when he first appears.

Edward slowly becomes a romantic interest, and another character, Cornelius, Edward’s closest friend, brings in a sense of jealousy toward Dora for her developing relationship with Edward

Even the secondary characters are well designed and believable.

But let us not forget the mysterious man who brought Dora and Edward together. Who is he? It is an interesting turn of events when his role becomes clear.

Stokes-Chapman’s writing is strong; her story travels a direct line from beginning to end with no distractions or excessive backstory. The reader will easily turn the page to see what happens next.