The Palestinian Delusion: The Catastrophic History of the Middle East Peace Process 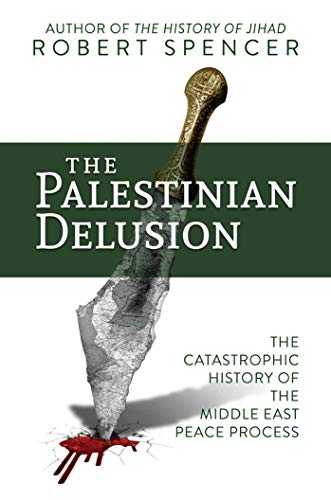 “Spencer shows that the so-called Middle East ‘peace process,’ often championed by the United States, has been a sham from the beginning because most of the Arab-Muslim world has refused to recognize Israel’s right to exist as a nation.”

Robert Spencer’s The Palestinian Delusion is a very pessimistic book, but in this case pessimism is realism. The Israeli-Palestinian conflict, as part of the larger Arab-Israeli conflict, has existed since Israel was founded in 1948.

Israel’s Arab and Muslim neighbors in the greater Middle East sought Israel’s destruction shortly after it established statehood. They have periodically waged war against Israel ever since. The roots of the conflict are both religious and geopolitical. Spencer believes there is no permanent solution to the struggle. He is probably right.

Spencer, whose previous books include Confessions of an Islamophobe and The History of Jihad, briefly reviews the competing historical claims to the territory that after World War I became the Palestine Mandate. The fall of the Ottoman Empire left much of the region to be divided by British and French statesmen and diplomats.

During the First World War, the Balfour Declaration promised a homeland for the Jewish people, but Israel’s claim to the land has much deeper ancient historical roots. Jews who migrated to the land that became the State of Israel were simply going home. Spencer notes that between 1881 and 1947 the Jewish population of Palestine grew from 25,000 to 600,000.

Spencer claims that there are no such people as Palestinians; they are not the indigenous people of the area that they claim to be. “There is no trace of support for such an idea in history,” he writes. “No archeological evidence, or evidence of any other kind has been found to substantiate a link between the ancient Canaanites or Jebusites and the modern-day Palestinians.”

Instead, Spencer continues, “[t]he land that is now the State of Israel corresponds roughly to the lands known in ancient times as Judea, Samaria, Idumea, and Galilee, and was inhabited by Jews.”

The Palestinians, according to Spencer, are an “invented people.” The term “Palestinians,” he writes, was invented by the Soviet KGB and its Arab allies in the 1960s to use as a weapon against Israel. Indeed, prior to Israel’s takeover of the West Bank of the Jordan River in the Six Day War of 1967, few if any Arab leaders championed the “rights” of the Palestinians to statehood.

The Palestine Liberation Organization (PLO) was formed in the early 1960s. Yasser Arafat became the “founding father” of the Palestinian people, even though he was a native of Egypt, Spencer writes. An invented people invented a history and became “victims” of Israeli “occupation” of their land. This fiction has been accepted by most of the “international community” and is a staple of politics at the United Nations.

Spencer shows that the so-called Middle East “peace process,” often championed by the United States, has been a sham from the beginning because most of the Arab-Muslim world has refused to recognize Israel’s right to exist as a nation. Spencer blames tenets of Islam, and he quotes generously from the Koran and Muslim clerics and scholars to buttress his argument.

But there is also a geopolitical aspect to Middle East politics that in the end benefits Israel. The only thing that unites Israel’s Arab-Muslim neighbors is hatred of Israel, which is why they support a Palestinian state. But those neighbors have geopolitical disputes with each other that frequently override their hatred of Israel. For example, Saudi Arabia and Iran both support a Palestinian state, but the Saudis fear Iran more than they fear Israel.

Spencer recounts the successive failed “peace” initiatives, which have consistently called upon Israel to surrender land for meaningless promises. Israeli leaders, often under intense pressure from the United States, have sacrificed territory for promises of recognition and “peace.” The only meaningful success story here—the peace between Israel and Egypt—was based on geopolitics and the statesmanship of Egypt’s Anwar Sadat and Israel’s Menachem Begin; and as Spencer notes, that remains a fragile peace.

The peace process has involved proposals for a two-state and one-state solution, neither of which will work, according to Spencer. A two-state solution merely provides Israel’s enemies with a national territory from which to wage war against the Israelis. A one-state solution threatens Israel with endless internal security problems and demographic destruction.

The fatal flaw in any peace process, Spencer writes, is jihad. “The Islamic doctrines of jihad, along with the supremacist and anti-Semitic passages of the Qur’an and Sunnah, have been responsible for the entire problem from the beginning up to now.”

Permanent peace between Israel and its Arab-Muslim neighbors is a chimera. Peace can be maintained and conflict can be managed and contained by paying attention to geopolitical realities. This is a grim and unwelcome message for those diplomats and international relations scholars who have invested so much in negotiations and the “peace process.”

Jews, perhaps more than any other people, understand the danger posed by an ideology—whether inspired by racial or religious hatred—committed to the destruction of a people. Israel will not and should not entrust its security to the empty promises of its enemies.

Spencer’s last chapter is entitled “What is to be done?” Here his message is aimed at Israelis. Jihadists will not stop their struggle against Israel. “The key to Israel’s survival, therefore, is not negotiations or more concessions of land for a chimerical peace, but strength: military, cultural, and societal strength.”

Israel and its allies, especially the United States, Spencer concludes, need to approach the conflict with “a sober realism and a determination to remain resolute against the jihad, to defend Israel as a legitimate state and a free society, and to stand firm for humane values and the principles of human rights.”