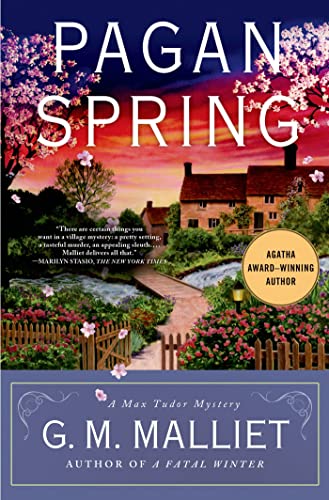 “. . . an engaging, traditional English village mystery in the vein of Agatha Christie.”

This quiet, ambling mystery features a village vicar granted liberties by the police in helping with their investigations. Perhaps that’s because of his past career with MI5 as an undercover operative.

Not that Max Tudor is looking for any more crimes to investigate. His MI5 career left him scarred, and there have already been two murders in his cozy English hamlet of Nether Monkslip (covered in the series openers Wicked Autumn and A Fatal Winter).

Here in Pagan Spring he’s happy with his new life as a shepherd of souls and romantic companion of Awena Owen, who organizes her life around a mélange of new age and spiritualist beliefs.

The couple blends well, though as new sweethearts they are uncertain about each other. Whatever they do is closely watched by the denizens of their little hamlet who, like all such villagers in this type of novel, specialize in minding each other’s business.

They come across as a petty lot since Ms. Malliet spends much prose highlighting their lesser qualities. Max and Awena stand out as likable characters amid a whole bunch one would rather avoid. The man who ultimately gets murdered is a particular skunk, and no one—including the reader—really minds that he gets knocked off. Almost everyone in the novel has a good motive.

But murder can’t be ignored, so the hunt is on for the killer. It takes Max and the police longer to figure out whodunit than readers likely will, but means, motive, and opportunity remain obscure until confessed.

In that regard, it’s a clever mystery. In other regards, it suffers from intermittent weaknesses in craft. Some author-convenience dialogue is one of them. A long scene that overdoes annoying character traits without advancing the story is another. Characters’ oddly indifferent reactions while discussing the case next to a dead body is a third.

These are balanced by some lovely descriptions of place and lifestyle and portrayals of character. And the mystery is not only intriguing but morally justifiable, if not legally so.

Quibbles aside, Ms. Malliet provides an engaging, traditional English village mystery in the vein of Agatha Christie. Max and Awena, as well as the charming Nether Monkslip have what it takes to sustain a promising series.