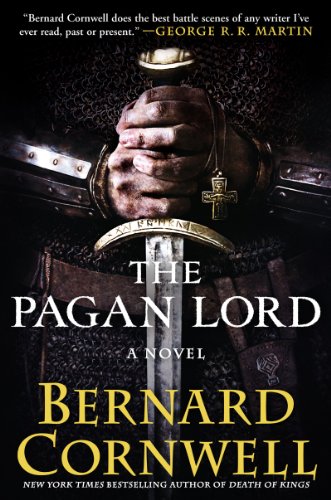 The Pagan Lord is the seventh book in internationally acclaimed author Bernard Cornwell’s latest Saxon Tales series, aka Warrior Chronicles. Even though Cornwell is a fiction writer, Pagan Lord is as well researched as if it were a historical monograph. The setting is 10th century England when Saxons and Danes (Vikings) were fighting for control of Britain.

This story is told by Uhtred, the hero who saved Britain from the Danes. One can easily visualize the old warrior sitting in front of a fireplace, his grandchildren either in his lap or on the floor before him, listening intently as his tale unfolds, hanging on every word—even if they have heard this tale many times before.

The story begins with Uhtred and his escort, which includes his youngest son, riding hard to some unknown objective which soon becomes clear. Uhtred is more than angry; he is pi**ed! His oldest son has become not only a Christian, but a Christian monk as well. When he confronts his son it sets off an almost unimaginable chain of events.

The suspense Cornwell creates captures the attention to the last page. In typical Cornwell fashion he has set the stage for the eighth volume in the series.

Although The Pagan Lord is part of a series it is a standalone novel; however, if this is the first volume in the series you have read, then take the time to find out where and how Uhtred’s adventures began. How did we get from there to here?

Cornwell’s ability to not only describe battles in great detail, but to make them believable as well continues in The Pagan Lord. The author has obviously studied military tactics and strategy.

Although Cornwell is not explicit in his discussion of Uhtred’s strategies and tactics, it is quite obvious that he knows there are only two types of war: asymmetric and senseless. The book is filled with instances of Uhtred’s understanding and implementation of asymmetric strategies and tactics. As in all phases of war even the best laid plans do not necessarily pass the first test of combat.

Britain is noted for its crazy weather patterns and almost continual fog. Perhaps Clausewitz once visited Britain. If he did is that the reason he coined the term “fog of war”? Probably not, but Uhtred experienced this fog over and over again. Yet he picks himself up each and every time. How he deals with the Clausewitzian paradigm and whether or not he succeeds, fails, or remains in a standoff will capture your attention.

Cornwell almost dares the reader to predict the outcome. This is Cornwell at his best. Consider, for example, that the Danes have overrun much of Northumbria, which is in northern Britain and borders Scotland. There is one lonely strong hold, Bebbanburg, which is rightfully yours. As fate would have it your uncle has stolen it from you and as a result your cousin will soon inherit it, unless . . . you can take it back by force. The principal reason the Danes have tolerated its existence is they believe it to be virtually impregnable. To them it simply is not worth the cost, unless the proprietor becomes so troublesome that they feel they have to get rid of him.

Both his uncle and his cousin realize this. So they play the game and are content to maintain a tenuous peace.

But how does Uhtred do what the Danes cannot? By doing the unexpected.

When King Alfred was alive Uhtred was considered a hero and Alfred’s most loyal and greatest warrior. When Alfred died, his son, Edward became king of Wessex, but he did not hold Uhtred in the same regard. This was not good for the Saxons.

For expansionist reasons the conquest of Britain was always in the minds of the Danes. Even though King Alfred was dead and his son Edward surrounded himself with overly cautious advisors, the conquest of East Anglia, Mercia, and Wessex were daunting tasks. Even so, the Danes believed they could use Edward’s indecisiveness and overly cautious advisors to their advantage. Eventually the Danes put together what they thought would be an almost foolproof plan to finish off the Saxons. Only Uhtred stood in their way.

But the Danes were convinced that the consequences of Uhtred’s attempt to talk sense into his oldest son and get him out of that foolish monk’s attire had compromised his influence. Thus they thought their time had come.

Then there is the issue of deception. The Danes had good spies and convincing collaborators to pull off their plan, which was seemingly working. Would Uhtred thwart the attempt by the Danes? How did Ceaster figure into the story? What about Teotanheale?

Cornwell ends this volume with “Then there was another silence. A long silence. Gisela had faded and my eyes stared at misted nothingness. I was aware of people around the bed. A horse neighed and out of the dark an owl called.”

Hmmmm. Perhaps it was not Uhtred who was telling the story after all. Maybe it was his son Uhtred Uhtredson—or could it have been Father Judas, the monk?

Let us hope that there will be an eighth book in this series to answer at least a few of these questions.