Pacific Legacy: Image and Memory from World War II in the Pacific 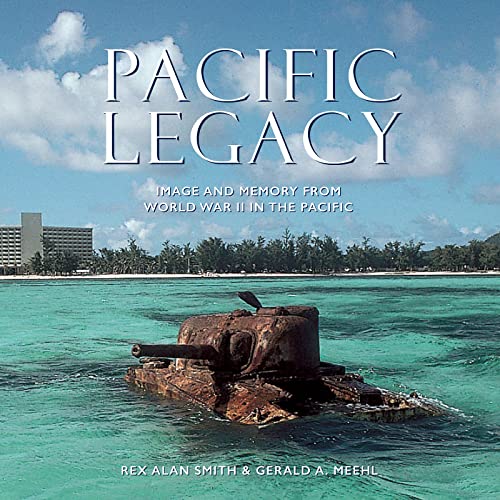 “This is very much a book about war from the perspective of the frontline combatant. It is a story of fear, uncertainty, courage, fortitude, comradeship, and heroism. It is a story that cannot be told too many times.”

It is unfortunate that so many “educated” Americans know so little about their country’s history. As the generation that fought the Second World War passes away, historical memory of that conflict suffers. While there have been good movies and documentaries produced about World War II, reading good books is still the best way to learn and fully understand the history of that war.

In Pacific Legacy, Rex Alan Smith and Gerald A. Meehl combine historical scholarship, first-hand accounts by U.S. and Japanese soldiers, sailors, and airmen, and riveting photographs to retell the story of America’s victory in the Pacific in the Second World War.

This is the second edition of this oversized book that was first published 17 years ago. (In the book’s preface, Meehl notes that co-author Smith, a Pacific War veteran, died in 2010). As the authors note, in America the war in the Pacific tends to get overshadowed by the fighting in Europe. Despite the fact that Japan attacked the United States, Hitler was deemed to be the greater foe. Indeed, U.S. war planners and policymakers agreed to fight the war on the basis of a “Europe First” strategy.

Perhaps, too, the war in Europe is better known to Americans because the places where it was fought (London, Paris, Berlin, Rome) are more familiar to them (and more accessible) than remote islands and atolls in the Pacific. How many Americans, after all, can locate on a map Guadalcanal, Tinian, Bougainville, Saipan, Tarawa, and lesser-known battlefields?

The authors use maps of the Pacific Ocean and photographs of long forgotten island battlefields to acquaint readers with the locations and sites of the fierce fighting and to give some sense of what it looked like to the young men who fought there. This is very much a book about war from the perspective of the frontline combatant. It is a story of fear, uncertainty, courage, fortitude, comradeship, and heroism. It is a story that cannot be told too many times.

From Pearl Harbor on December 7, 1941, to the dropping of the atomic bombs on Hiroshima and Nagasaki in early August 1945, war in all its horrors spread across the Pacific.

At Pearl Harbor, Navy sailors struggled for their lives and to save others after Battleship Row was decimated by the Japanese air attack. “In dozens of below-decks compartments,” the authors write, “they splash and fumble in a dark and topsy-turvy world where . . . floors have become walls and walls have become floors, frantically seeking an escape that too many will not find.”

When the USS Arizona blew up, “it just rained sailors” according to one surviving veteran. Men drowned and burned alive. “[D]eath is more common than life,” he remarked, “and in the cases of many blasted and scalded men, preferable to it.” And that was just the beginning.

On Wake Island that same December, the Japanese besieged a small Marine and Navy force (along with civilian construction workers). The Americans held out against all odds for two weeks until capitulating on December 23rd.  The surviving sailors, Marines and some construction workers were transported to POW camps where they suffered the agonies and ill treatment of nearly all of those combatants who surrendered to the Japanese during the war, and most noncombatants that were subjected to Japanese rule.

American forces in the Philippines and their Filipino allies suffered a defeat that resulted in the largest surrender in U.S. history: 12,000 American and 60,000 Filipino soldiers. After the surrender on the fortress-island of Corregidor, the Japanese forced their captives to walk 70 miles to Camp O’Donnell in the infamous Bataan Death March. “During that march and their subsequent three-and-a-half years of imprisonment,” the authors write, “these men were to endure brutalities unsurpassed even by those perpetrated by Hitler’s Nazis in Europe.”

Many of the captives suffered from malaria and dysentery. They were denied food or water. Any prisoner who collapsed or fell out of line was immediately shot or bayonetted to death. The captives were clubbed, beaten, stabbed, and in some cases beheaded with swords. The authors include several descriptions by survivors of the march. It is harrowing, horrifying, and unforgettable.

America struck back, however, first with the Doolittle Raid on Tokyo, and then in a series of island campaigns in the Southwest Pacific under General Douglas MacArthur and across the Central Pacific under Admiral Chester Nimitz. These campaigns make up the bulk of Pacific Legacy.

Guadalcanal in the Solomon Islands. Betio in the Tarawa Atoll. Saipan, Guam and Tinian in the Mariana Islands. Peleliu in the Palau group of islands. Back to the Philippines. Iwo Jima and Okinawa. At those and many other Pacific battlegrounds, the authors describe scene after scene where “uncommon valor was a common virtue.”

U.S. Army soldiers and airmen, Navy sailors and airmen, and especially the Marines repeatedly overcame the fanatical resistance and well-entrenched defenses of Japanese forces, and suffered the horrifying sights, smells, and sounds of war.

On Guadalcanal, U.S. troops beat back terrifying night attacks by the Japanese, and later endured a naval bombardment that one soldier called “indescribable.” “Unless you’ve been through it,” he continued, “you just can’t imagine what it’s like.” And after the bombardment ceased, “the screams and sobs we heard were even more terrible.”

On Betio (in the Tarawa atoll), an island about a third of the size of New York’s Central Park, the Marines waded ashore in the face of “incessant and deadly” fire. Casualties mounted as those Marines who made it to shore were pinned down behind a seawall. Soon, the authors write, “the stench of death seeps into the air.” One correspondent who was there described Betio as “this blood drenched, bomb-hammered, stinking little abattoir of coral sand.”

On Saipan, Guam and Peleliu, there was more of the same: bitter, intense combat; little rest; fanatical Japanese resistance; and what one soldier called “the putrid odor of rotting flesh day after day, night after night.”

As American forces fought their way closer to the Japanese main islands, both U.S. and Japanese casualties grew. The nightmarish fighting on Iwo Jima and Okinawa produced a total of about 80,000 American casualties (dead, wounded and missing) and nearly 150,000 Japanese casualties (not including the tens of thousands of civilians killed on Okinawa). Very few Japanese soldiers surrendered. As American commanders planned the invasion of Japan, the casualty estimates for U.S. servicemen reached into the hundreds of thousands.

The atomic bombs dropped on Hiroshima and Nagasaki, with all the destruction and innocent lives taken, saved both American and Japanese lives. The authors note that Japan’s defensive plan was to “immerse the invading forces in so bloody a combat hell that they would be forced to accept a negotiated peace that would leave the Japanese homeland and government relatively intact.”

Japan readied 5,000 kamikaze planes, 6,000 suicide boats packed with explosives, a home army of more than two million soldiers, and a militia force of over 20 million to meet the American invasion forces. Deep caves and tunnels similar to those encountered on Peleliu and Iwo Jima had been prepared. It would have been an unprecedented bloodletting.

Fortunately, after Hiroshima and Nagasaki were nearly obliterated from the map, Japan surrendered, though the authors note that several Japanese soldiers on Pacific islands that had been bypassed by the Americans didn’t hear about the surrender until many years later.

The photographs in the book help bring to life what the soldiers experienced more than 70 years ago. They also reveal what many of those battlefields look like today. There is an American tank partially submerged offshore of Betio. On Guadalcanal, some of the American barbed-wire defenses on Bloody Ridge remain. The remnants of a Japanese air raid shelter can be seen on Saipan. Corregidor Island has become a military museum. The runway where the Enola Gay and Bock’s Car took off to fly their atomic bombing missions can still be seen on Tinian. And there is so much more.

Author James Michener, a naval veteran of the Pacific War, once wrote that the men who fought the battles in the Pacific “will be remembered as long as our generation lives. After that, like the men of the Confederacy, they will become strangers. Longer and Longer shadows will obscure them, until their Guadalcanal sounds distant on the ear like Shiloh and Valley Forge.”

As this book shows, the men who fought the Pacific war deserve better.