Overbooked: The Exploding Business of Travel and Tourism 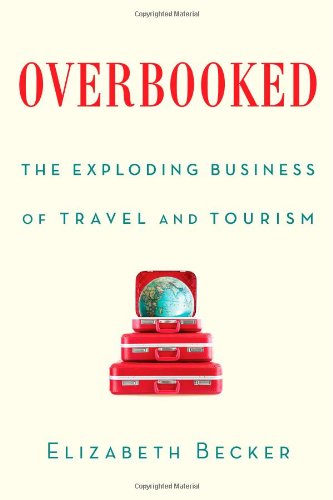 Just as the population has increased over time, so has people’s propensity to travel. Each year more than a billion people travel from one country to another, up from 25 million trips in the middle of the 20th century, and some 250 million three decades ago. There might be as many as four times that number of discrete trips within the boundaries of a country as opposed to crossing country boundaries.

Elizabeth Becker’s thesis in Overbooked: The Exploding Business of Travel and Tourism is that there is a self-serving conspiracy—between the travel industry and the media that cover the travel industry—to promote the industry bottom line at the expense of knowledgeable, informed, consumer travel experiences.

In Overbooked the author embarks on a “rare attempt to examine what the modern travel and tourism industry means for cultures, countries, the environment and the way we live. . . . treat tourism itself as . . . the biggest industry in the world.”

The author approaches her subject through an exploration of how tourism evolved into an industry, then explores tourism through the prism of five primary themes: culture: France, Venice, and Cambodia; consumer: cruises and Dubai; nature: Zambia, Costa Rica, and Sri Lanka; the new giant: China; and the old giant: the U.S.

Concerning the travel value proposition, Ms. Becker writes, “At every point of every trip, the industry is figuring out how to make a profit on every experience, be it a made-for-tourists local dance ensemble, the purchase of a length of silk, or taking a motorboat cruise up the steaming jungle river.”

In this manufactured tourist hustle, “serendipity and happenstance, once the main point of travel, are disappearing. What were once journeys of discovery, escapes from the daily dullness of life, or a plan for retirement are now packaged trips with nearly every aspect planned in advance.”

A journalist herself, she places significant blame on the media, which predominantly are more consumers of the travel sector’s freebies than critics of the travel experiences on offer.

Whereas Marco Polo in the 13th century and then the Baedeker travel guides in the 19th century illuminated their readers concerning the culture and history of places, today’s writers, the author charges, enjoy a corrupt relationship with the travel sector, for the travel press are functionally bribed to write what the travel enterprises want written.

As former New York Times travel section editor Nancy Newhouse reveals, commenting on her paper’s “Where to Go and What to Do” reporting, “We didn’t give out the bad report cards. We never did the ten worst, only the ten best.”

Given how the system works, the media understandably is less than inclined to provide critical commentary, for any reporter who writes a less than effusive story about a place is unlikely to be invited back to that place—or to any other place.

Indicative of this insidious self-serving connection is that “the Greater Miami Tourism Board . . . gives away 300 trips a year that include free meals at Miami restaurants and free hotel rooms. The publicist for one of these restaurants, told . . . giving travel writers free meals, was the only marketing she did. It was much more effective and much cheaper than old-fashioned advertising.”

Not that advertising was unimportant, for “After World War II, travel industry became the single largest source of advertising for newspapers; at its high point in the 1960s, the industry was one fourth of all of the ad revenue.

“Normally, there is a firewall between advertisers and journalists. Advertisers do not receive special treatment from reporters. But the travel industry wanted more than the privilege of buying ad space. They hired public relations firms to work hand-in-glove with journalists, giving them free trips, meals, hotels and nights on the town and then expecting them to write rave reviews.”

Tourism can loom large for the poorest of nations, stimulating the local economies by the spending of “foreign tourists, who marvel through exotic customs, buy suitcases of souvenirs and take innumerable photographs of stunning landscapes.”

But tourism can have significant downsides, for “just as tourism is capable of lifting a nation out of poverty, it is just as likely to deplete the environment, reduce the standards of living because the profits go to international hotel chains and corrupt local elites (what is called leakage), indicated to the worst of tourism, including condemning children to the exploitation of sex tourism . . . to make way for more resorts with spectacular views, developers destroy native habitats and ignore local concerns . . . another catastrophe for the country’s betting and tourism has come from wealthy vacationers who fall in the love with the country and buy so many second houses that locals can no longer afford to live in their own towns and villages.”

The role of travel is unique and distinctive, for “Tourism is that rare industry whose ‘product’ is a country.”

In its many faceted forms, “Tourism is octopus like, its tentacles reaching out to aspects of life that are as diverse as coastal development, child prostitution, the treatment of religious monuments, and the survival of the threatened bird species and native dancing.”

What does the future hold? Fundamentally, there is the risk that the very motivation to see and experience distant places could diminish the ultimate appeal of those places, for “There is no doubt that the number of trips will rise, raising urgent questions about responsibilities. Travel is an extraordinary pleasure and was once a privilege. Now it is considered a basic right without limits or a sense of responsibility for how all of this travel is affecting the places we love.”