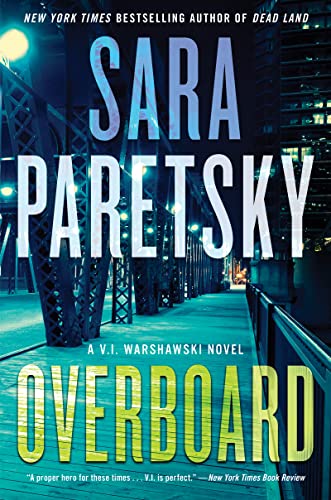 “One of Vic’s friends makes a comment near the end that sums up why this investigator finds her work worth the effort: Max comments, ‘If everyone sat at home watching Netflix, we’d never have any justice in this life.’”

No good deed goes unpunished. Detective V.I. (Vic, or Victoria) Warshawski may have only let her dogs out for a short run, but they take off by the waterfront and find a half-dead young woman lying among the rocks. Of course Vic calls for emergency services, and by the time the fragile teen is getting help at the hospital, the private investigator has got trouble with the police, the hospital, and, most importantly, someone from the Chicago underworld who thinks the immigrant teen was carrying a vital small item and must have slipped it to V.I. during the rescue. Not so—but is anyone going to believe Vic, or is her life going to be repeatedly in jeopardy at every move she makes?

Of course, her life is never simple enough to just have one crisis underway: She’s also trying to provide protection for some aging Jewish friends whose synagogue is under attack. Oddly, there’s a big-money real estate deal offered for the old building. Is the vandalism connected, as a form of pressure? As she gradually begins to also see parallels between the two ongoing crises, Vic also suspects someone on the police force is involved with the mob and its money.

That’s enough to concern her friends, especially after one particular officer with a reputation for torture and menace targets Vic maliciously with both language and force.

Her trusted advisor Lotty puts it bluntly: “It’s shocking, and deplorable, that you and this young man were molested,” Lotty said. “But, Victoria, please be realistic. If the police really are covering up a major crime, you can get yourself seriously wounded physically, on top of the degradation of a strip search.” When Lotty asks Vic to back off, for the sake of the friends who love her, it seems important to do so.

Yet other forces are in action: The rescued teen vanishes from the hospital; when Vic tracks down the youth’s Hungarian grandmother, she finds collusion between a nursing home and the black-ops police officers. More assaults on the synagogue distress Vic’s elderly friends to almost the breaking point. She clearly can’t help being pulled back into this dangerous mess, can she?

One of the pleasures of reading Sara Paretsky’s Warshawski novels is that despite the threats and pressure, there’s relatively little gore spread around, so the focus can stay on the perpetrators and their motives. Even the bent police pressure on Vic amounts to little more than battering her (although, granted, much worse gets threatened). Series readers will recognize the steady buildup of Vic’s insistence on justice at any cost, a reliable characteristic of these books.

New to V.I. Warshawski? Relax and enjoy the well-plotted story and don’t worry about earlier titles—Parestsky doesn’t embed anything that calls for reading the other books, and her highly professional narrative makes it easy to catch Warshawski’s motivations and maneuvers. The quirks of the Chicago waterfront add to the book’s drama, and to the factors stacked up against this lone detective. But don’t take the “lone” notion too seriously: Vic’s willingness to be a friend, with all her heart, gains an equal return, and she’s well supported.

One of Vic’s friends makes a comment near the end that sums up why this investigator finds her work worth the effort, despite its risks and her often wounded body: Max comments, “If everyone sat at home watching Netflix, we’d never have any justice in this life.”

For Vic, that’s not going to be a problem.