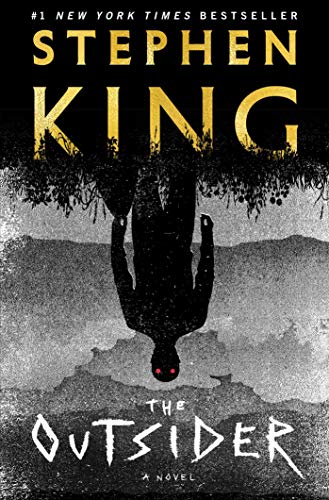 “Masterfully written and sure to supply plenty of creepy-crawlies, The Outsider by Stephen King once again hits the ball out of the park.”

Terry Maitland is an upstanding resident of Flint City. Married to Marcy, the father of two little girls, Terry also is an English teacher and Little League coach. His reputation has always been above reproach, as many adults, as well as children, look up to him.

The story commences with Detective Anderson interviewing Jonathan Ritz, a man who discovers 11-year-old Frankie Peterson's defiled body in the local park. The witness interviews read precise and exact as to what one would expect transcribed from real-life investigations. Somewhat boring with unnecessary verbiage, this is King's way of getting into his character's heads and leading his "Constant Reader" (his term) to a climax.

Imagine Terry's astonishment when during a game he is coaching, he is greeted on the field by his long-time friend, Detective Ralph Anderson, who arrests him for Frankie's murder. Most of the townsfolk are in attendance to bear witness to this action, including Marcy and the Maitland children. Stunned and distressed, they cannot understand what is happening. Through tears and disbelief, Marcy's friend takes the girls to her home when Marcy learns a warrant is submitted to search their house.

"Marcy thought: An hour ago the most important thing in my life was a Golden Dragons win and a trip to the finals."

Terry swears his innocence of any wrongdoing and offers an airtight alibi, yet witnesses swear seeing him with Frankie and later, covered in blood, exiting the area where the boy was found. His fingerprints and other DNA attest to his guilt.

However, Terry's alibi checks out from several colleagues in his presence at the time of the crime, as well as security videos. So, how can the authorities have ironclad evidence that he, in fact, committed this deed? No one can be two places at once. This is where things get chilling.

Bill Hodges, a key player from King's trilogy and the mini-series, Mr. Mercedes is remembered in this novel. Holly Gibney, Hodges' protégé, now runs Hodges' company, Finders Keepers' (a private investigation firm), after his death is called in on this case. Fables and folklore of long ago surface, bringing an eerie impact into place. Can a person be two places at once? Does the supernatural really exist?

"No, not in the real world, where drunk incompetents like Jack Hoskins got pay bumps. All Ralph had experienced in his nearly fifty years of lie denied the idea. Denied there was even the possibility of such a thing. Yet as he sat here looking at Fred (or what remained of him), Ralph had to admit there was something devilish about the way the boy's death has spread, taking not just one or two members of his nuclear family, but the whole shebang."

King drags out his plot, which for him, works very well. The intricate and defined description of his characters and locations pull the reader right into the scene. Some may find it off-putting, but this is how he grabs one when least expected. His prose contains the normal vernacular of the present time, along with profanity and shock effect with no holds barred, yet compels one to continue reading, anticipating a profound and astonishing conclusion, while not wanting the book to end. Masterfully written and sure to supply plenty of creepy-crawlies, The Outsider by Stephen King once again hits the ball out of the park.