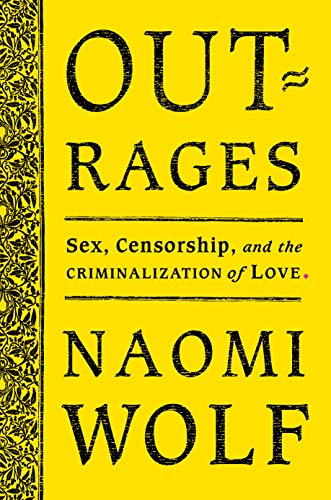 “Outrages is a fascinating history book with a cast of characters and an epic sweep that make it read like a novel Charles Dickens could have written, if he had ever written one about queers.”

Few people have probably ever given thought to the correlation between homophobia and the development of a sewer system in 19th century London, but Naomi Wolf convincingly argues that the relationship between the two was far from casual.

At a time when diseases like cholera were wiping out entire neighborhoods, government officials intervened to insure each and every house in the city was connected to the newly developed waste disposal system. The recent epidemiological knowledge that filth in one home had the power to infect people in the next was soon extended from a medical to a moral principle. The result was a spate of laws that increasingly focused, not just on public sanitation, but on art, literature, and private sexual behavior.

This is the era portrayed in Outrages: Sex, Censorship, and the Criminalization of Love. Naomi Wolf’s book covers the second half of the 19th century, discussing how the British state, in its quest for both physical and moral purity, became increasingly intrusive, condemnatory, and punitive.

A problem which many history books encounter is that, in discussing events in broad terms, the effects these events had on private lives are treated only in the most general and abstract manner. Wolf avoids this problem by choosing John Addington Symonds as an embodiment of her thesis. His adolescence and adulthood neatly parallel the period Wolf examines, and because he was both a writer and a homosexual, he fell into two groups of people the government viewed with ever-growing distrust. As laws regarding both art and sexuality evolved, Symonds evolved alongside of them. His strategies for both living and publishing became increasingly intricate as his literary and personal survival became increasingly uncertain.

He was a complicated man: simultaneously brave and fearful, honest and secretive, open and closeted, forward thinking, yet taking nostalgic refuge in a Grecian past. His life would be interesting on its own account, but his friendships, contemporaries, and correspondents are a veritable encyclopedia of Victorian arts and letters. Figures such as Algernon Charles Swinburne, Walter Pater, Dante Gabriel Rossetti, Christina Rossetti, Annie Besant, Simeon Solomon, and John Everett Millais, drift in and out of the pages, each of them struggling to survive in a hostile social and legal climate.

The period Wolf illustrates is bracketed by two people whose lives intertwined with Symonds’, and whose stories encapsulate the narrative arc of the book. First there is Walt Whitman, whose mid-century editions of Leaves of Grass held for Symonds a promise of sexual and artistic freedom (significantly, these editions had to be smuggled into England). Later, there is Oscar Wilde, whose fin de siècle trial for “gross indecency” illustrates how far Whitman’s promise fell short of fruition.

At least in their own lifetimes. Whitman and Wilde are now both regarded as more heroic than reviled, and if Symonds still lives, to some extent, in their shadows, he had the courage and the hope to envision a world he would never see. Indeed, it is Wolf’s contention that, through ultimately refusing to be silenced, he helped write a more liberated world into being.

Outrages is a fascinating history book with a cast of characters and an epic sweep that make it read like a novel Charles Dickens could have written, if he had ever written one about queers. Naomi Wolf blends impeccable research with beautiful prose and brings to life one of England’s—and literature’s—most complicated ages.