Out of Time: A Novel 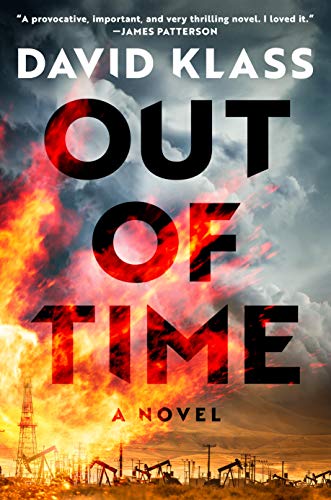 “a page-turner. Klass has developed flawed characters who travel through his story arc with speed, each to achieve his own goal, and each knowing he must confront and stop the other.”

If you have an extra 24 hours that you are doing nothing with, pick up Out of Time by David Klass and those 24 hours will fly by.

Green Man is an environmentalist of the first order, and for several years he has been making it clear to the world that humanity is destroying the world, and it is up to him to correct the situation.

Tom Smith, a novice FBI agent, but a brilliant computer programmer joins the hunt for Green Man, and he appears to be the only person on the case who sees the Green Man in a different light.

Klass starts the story with Green Man destroying a dam—it’s his sixth attack on humanity’s environment-destroying activities. He has planned this action down to the nanosecond. He escapes notice and returns to his home in Michigan undetected.

As the antagonist, he should be disliked by the reader, and yet his goal of saving the world is a lofty one and hard to dispute. His actions do, however, result in innocent people, parents, children, losing their lives. Although he regrets such action, he claims it is for the greater good—collateral damage.

Green Man is the hero to his followers, especially Ellen, the director of the Green Center and her daughter, Julie. Ellen has a special relationship with Green Man that is unknown to her followers at the center, or her daughter. The word accomplice comes to mind.

Jim Brennan, the leader of the FBI team tasked to find Green Man finds himself in the precarious position of accounting for his job to a disagreeable president, and an attention hungry director of Homeland Security. Tom may be Jim’s only hope for survival in DC and the weight of the search sits on Tom’s shoulders.

Here Klass brings his characters to life when Tom, knowing that even one life lost is not acceptable, finds it difficult to totally disagree with the Green Man’s end goal. And yet the question of collateral damage remains strong.

Convincing Brennan to let him search in other ways beyond the normal FBI treatment, Tom follows his “gut” and begins to uncover clues while the FBI does what is does best—door to door searching.

The pressure continues to mount, and when news leaks that a suspect has been caught, and the president steps too far, too fast, Brennan can feel the DHS director breathing down his back, and soon Brennan is retired with honors.

Tom is out in left field, when he is also removed from the investigation. And this is where he really goes rogue. Contacted by another agent he worked with initially, Tom is convinced to use his exceptional skills to profile Green Man, and soon both Green Man and the seventh target are identified.

The race is on to see if Tom can find the Green Man before he commits the biggest score of his life.

This is, indeed, a page-turner. Klass has developed flawed characters who travel through his story arc with speed, each to achieve his own goal, and each knowing he must confront and stop the other.

If there is any part of this thriller that doesn’t come up to snuff, it is a few brief pages of minute detail about fracking that appear about one third of the way through the book. But don’t worry about that—it passes, and the story picks up speed again. It’s a good time for a break.

Out of Time is definitely worth the read.