Our Year of War: Two Brothers, Vietnam, and a Nation Divided 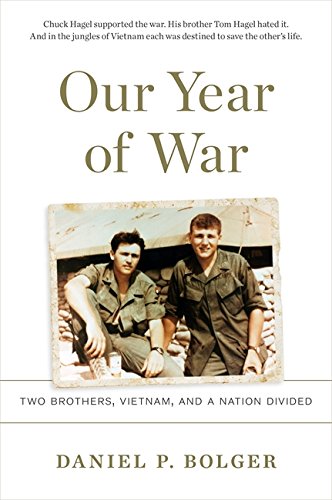 The Vietnam War was one of the most tragic and divisive events in the history of this country. Yet everyone who served there, willingly or not, is still a hero for having done his/her duty in such a less than desirable venue. The expenditures of life and treasure are still being questioned decades later as well as the strategy followed by the United States government and military in the initial stages of the force buildup and its aftermath in the mid-1960s.

Among those who constituted part of this buildup were two brothers, Chuck and Tom Hagel. The former, the older of the two, was a United States Senator and eventually appointed Secretary of Defense. Unusually, they both not only served together during the same year but also in the same company of the 9th Infantry Division, something which the chain of command is generally loath to permit following the five Sullivan brothers’ deaths on the USS Juneau in 1942.

This is not necessarily a full-blown biography of the Hagel brothers, although it does include much personal and family history and information. This is a story of the brothers’ respective year-long experiences in the U.S. Army during the turbulent Vietnam War and how they came to their individual perspectives regarding that conflict.

Daniel P. Bolger, a retired lieutenant general, has weaved a highly readable account of the brothers’ lives and war experiences along with the political, military, social, and cultural circumstances extant in the United States, and internationally, at the time. Indeed, that is exactly what is reflected in the book’s subtitle.

Each chapter details the specifics of the Hagels’ actions in addition to the context of events in the wider world. As a former soldier himself, Bolger is long on military speak yet provides clear descriptions and definitions of acronymic terminology, as is the military wont, as well as technology (weapons, vehicles, equipment, etc.) employed at the time to fight the war so that readers less familiar with such are not overwhelmed or confused.

The combat operations involving the Hagels are the heart of this story, including how each saved the other’s life during their tour. The various consequences, results, and repercussions of their military missions are sometimes heartbreaking and go far toward giving an inside view of what it must have been like for the average “grunt” over the course of a year-long tour of duty in theater and how such could influence one’s outlook on the conflict, for weal or woe.

As it was, they spent most of 1968 in Southeast Asia. Rather ominously, that was the year of the Tet offensive in January, a somewhat more modest Communist offensive in the spring, President Lyndon Johnson’s declination to run for re-election as Commander-in-Chief, multiple urban riots amid the climax of the civil rights movement and the tragic murders of Dr. Martin Luther King and Robert Kennedy along with the gelling of the growing antiwar movement.

As mentioned above, postwar, Chuck Hagel became a United States Senator from Nebraska and a Secretary of Defense under President Barack Obama. His brother, as a consequence of his opposition to the war, became a champion of the “downtrodden, powerless, and the forgotten”, counseling his fellow veterans in obtaining benefits and working with the mentally challenged, among other things.

Highlights included here are the three maps: One of which is the state of Nebraska, one of the various operational areas of South Vietnam and the other of the specific area of operations of the Ninth Infantry Division showing many of the locations where the Hagels fought their battles.

The photo section contains photographs of personal, historical, and combat-relevant subjects and are mostly from the U.S. Department of Defense and the Chuck Hagel archives of the University of Nebraska.

Although there is no bibliography specifically, the chapter notes demonstrate extensive use of official Defense Department documents and archival material as well as interviews with the brothers and, of course, secondary materials.

This really is a quickly and easily read book that tells the Hagels’ personal story while incorporating the big picture of events and influences from the pivotal year of 1968. It is especially indicative of the division caused by the Vietnam War in American society and government and with which we continue to deal 50 years later.