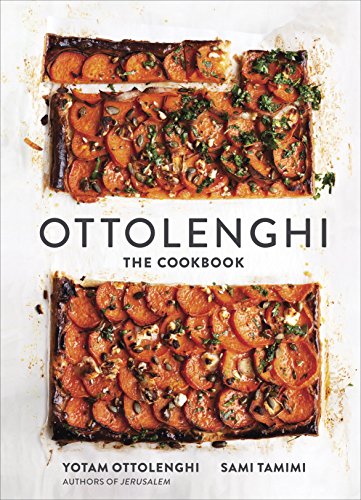 Without the name recognition from a TV show, a U.S. restaurant, or a popular food blog, Israeli-born London chef and restaurateur Yotam Ottolenghi and coauthor Palestinian-born chef Sami Tamimi’s third cookbook Jerusalem became a surprise bestselling cookbook when it was released in the U.S. last fall. Julia Moskin of the New York Times calls it “Jerusalem fever” and likens its impact to cookbooks like Mastering the Art of French Cooking and The Silver Palate.

But its surprising ascent to the New York Times bestseller list is about more than a poignant tale of a famously divided city united by shared ingredients: If Jerusalem is to our time what Mastering and The Silver Palate was to home cooks in the 1960s and ’80s, then it is because it is the kind of cookbook that propels us into the kitchen and makes cooking adventurous again.

The same can be said for Ottolenghi, the coauthors’ debut cookbook. Based on the recipes of the eponymous group of London restaurants, Ottolenghi is less intentionally ethnic than Jerusalem while still being informed by the two chefs’ Israeli/Palestinian background.

As Yotam Ottolenghi playfully writes in his introduction “If you don’t like lemon or garlic . . . skip to the last page.” He later goes on to outline a list of basic ingredients that are frequently used in their recipes along with hints on where to buy them. It is not a long list with perhaps the most exotic being two Middle Eastern spices: sumac and za’atar that he suggests can often be found in supermarkets. (However, if you doubt that you can find it where you live, they can be easily purchased online from a reliable spice purveyor like Penzeys Spices. Problem solved.)

Once stocked with the basic ingredients (and a supply of baking trays) you’ll be ready to tie on the apron and get cooking.

There is nothing that a home cook wishes for more than to break out of his/her cooking rut and try something new and unexpectedly delightful. This is what makes Ottolenghi so appealing.

It offers page after page of new and interesting flavor combinations to try. And the best part? All of them can be served at room temperature—meaning you can have everything prepared ahead and enjoy your guests instead of slaving over a hot stove while everyone else is enjoying another glass of wine. No wonder Ottolenghi-inspired dinner parties have become so prevalent in London.

If Boeuf Bourguignon was the signature dish of Mastering the Art of French Cooking and Chicken Marbella defined the Silver Palate era, then surely Ottolenghi will long be remembered for Roast Chicken with Sumac, Za’tar, and Lemon. (Best to buy the sumac and za’tar in bulk.)

Like Chicken with Caramelized Onion and Cardamom Rice—the fan-favorite dish in Jerusalem—this chicken sings with exotic Middle Eastern flavors while still feeling like comfort food. And since its not cooked along with rice like the Jerusalem chicken recipe, it is less tricky to get right.

In fact, it isn’t tricky at all: marinate the chicken the night before, put it on a baking tray along with the marinade the next day and roast it. (You may have to add additional chicken stock during the roasting process as the liquid does evaporate and will otherwise burn your baking tray.)

Some of the recipes in Ottolenghi are more seasonal than others and many of them almost beg to be grilled outdoors. Either way, they are delicious. They are also easily fiddled with to adapt to the ingredients that are available to you.

For example, in Peaches and Speck with Orange Blossom, grill the peaches outdoors. Instead of speck (an Italian cured ham) try prosciutto. Use any tender greens along with any bitter greens instead of the baby Swiss chard and endive that the recipe calls for. It’s the contrast of flavors that make this dish work, creating a satisfying combination of sweet, bitter and salty.

The Marinated Turkey Breast with Cumin, Coriander, and White Wine is also terrific on the outdoor grill. If you’ve got a gas grill cook it on the center burner with indirect heat from the remaining two burners.

The result is a turkey breast that is so flavorful it will surely become a fixture in your summer grilling repertoire. Serve it with some fresh, grilled corn and you’re done. In cooler months, roast the turkey in the oven as the recipe is written and pair it with the Couscous with Dried Apricots and Butternut Squash on page 80.

Most restaurant cookbooks don’t succeed in the home kitchen, but Ottolenghi has been adapted so well for the home cook that if you didn’t know the recipes came from their restaurant, you would have thought they came straight from their home kitchens.

Yet there is at least one recipe that may literally end in tears if you try it at home: Turkey and Corn Meatballs with Roasted Pepper Sauce. Professional chefs may shrug off kitchen accidents, but home cooks take burns seriously. Turns out that the corn kernels in the meatballs can pop (just like popcorn) in the hot oil sputtering oil out of the pan that can cause severe burning. It is no doubt why the recipe calls for you to first toast the corn kernels in a hot, dry pan before adding it to the meatball mixture. Even so you will probably still have a few un-charred corn kernels that will inevitably pop in the hot oil.

If you do try it, make sure you use a grill glove that covers your forearm as well as an apron (would a haz mat suit be too much?). Alternatively, skip the corn—it does add some texture to the meatballs but not enough to make a big difference. Just don’t skip the roasted red pepper sauce. Its delicious smoky sweet flavor makes the dish and would also work well as an accompaniment to grilled meat or fish.

The chapter on baking is also robust, although decidedly more mainstream (read non-Mediterranean). Yotam Ottolenghi trained and worked as a pastry chef in London before opening his restaurants and the baking section is a reflection of this.

Which is not to say his desserts are humdrum. The Carrot and Walnut Cake is a real standout. More like a torte than a typical American carrot cake, it is more sophisticated and less sweet while still having the traditional cream cheese frosting that we love. Serve this one at a dinner party and your guests will be clamoring for the recipe before they finish their last bites.

There is so much to love about Ottolenghi it is easy to see why it has been released with the same cushiony cover as its American predecessor, Jerusalem—at a certain point you are bound to hold it close and give it a big squeeze of thanks for all its goodness. Really, this book is downright huggable.

Get ready for Ottolenghi fever.