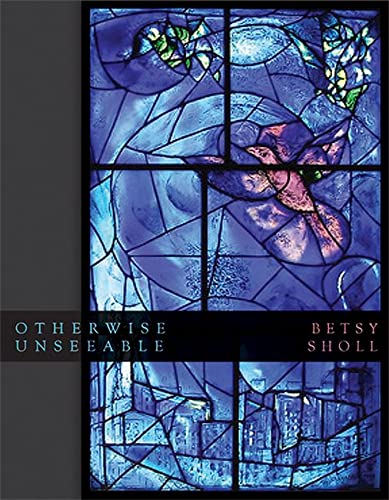 “Sholl’s poems do that: keep watch over the ruined world, love the wordless, the half-shattered, and the unnoticed. Otherwise Unseeable is a book of deep compassion and artful imagination.”

Naomi Shihab Nye once said, “Poetry calls us to pause. There is so much we overlook, while the abundance around us continues to shimmer, on its own." Betsy Sholl, who has served as the Poet Laureate of Maine and has published seven previous collections of poetry, doesn’t overlook much, as is evident in her new book Otherwise Unseeable, winner of the Four Lakes Poetry Prize.

The clam diggers in the poem of that name “dig for what’s hidden,” and this is what the poet does also; this poet seems to have a natural affinity for the things and individuals that many others turn away from or fail to see: the failed poems that never make it to completion, the flock of gypsies run out of town “like starlings scattered by gunshot,” or the small voice of a beggar, a voice that follows the narrator home, saying miss, miss . . .

troubling sleep—not a name at all,

but a failure, a lack, a lost chance.

Miss is what a person might call out to someone she doesn’t know, but the word also has many other connotations. A missed chance, a near miss, a failure, missing someone who was loved . . . And these are the spaces that Sholl most often explores in her poems.

It is not always the unseen that the poet focuses on; it is often buried sounds. In “Rahsaan,” for instance, she talks of sounds discovered by a brilliant jazz musician. The poem itself is very musical as it expertly plays with the sounds of the words, and the rhythms of pause and rush:

till someone comes along with a cellar

behind his eyes, and inside that

a furnace blaze of dreams, a rush of notes

Another poem, “Rush Hour,” is clamorous with sound and silence.  Amid the clatter of sirens and skateboards and traffic, two women sitting  in an outdoor café are approached by a deaf person, a person who is somehow off, with her bundles and intrusions, a woman trying vainly to communicate with two women who had been so comfortably chatting. The deaf woman whacks her head with her palm three times when they refuse to understand, and then she disappears back into the street life.  But she did communicate something, and for the two women, something has changed.

In poems such as “Russian Bells” and “U.S. Clamps Down on Pianos to Cuba,” the central concern is music that has been silenced. A couple of poems early in the collection deal with the poet’s struggle with stuttering. If she finds herself still, sometimes, between sound and silence, between communication and the frustrating struggle to articulate something important, does this lay the groundwork for her writing? Her poems do not stammer; they are lyrical, affecting, and musical to the core.

In Sholl’s world, music helps us accept our wounds, maybe even love our ruins. Among those ruins are ruins we become, or might become. “Elegy with Morning Glories,” written, apparently, about her mother’s debilitation due to a stroke, is particularly poignant.

I never thought she’d grow so fragile, so lost

looking out the window, she’d ask if that streetlight

was the moon. If so, think how many we’d have

lining the roads, each one disposable, replaceable.

While the poet sees her mother as she is now, of course she also sees the mother who has vanished. That kind of vision is hardly unique, but Sholl articulates it better than most.

“Genealogy,” the opening poem in the book, is written in third person, and may or may not be about the poet’s parents. What is striking about this poem, and characteristic of so many of the poems in the book, is Sholl’s strong use of metaphor, as well as the juxtaposition of opposing forces, which give the poem its tension and vivacity.

One of her parents was a flame, the other a rope.

One was a tire, the other a dial tone.

One was a candle, the other a bird. She was ashamed

of not burning, embarrassed she couldn’t fly.

Another poem that makes strong use of metaphor is “An Exchange,” in which a copper chicken brings with it a multitude of associations.  In the poem, a hen set loose and living in the woods during war-time Poland could be the poet herself.

that little mother of everything fragile,

her fluffed up breast, her snowcapped

cluck and bob—even now she sings,

keeping watch over the ruined world.

Sholl’s poems do that: keep watch over the ruined world, love the wordless, the half-shattered, and the unnoticed. Otherwise Unseeable is a book of deep compassion and artful imagination.