Other People We Married 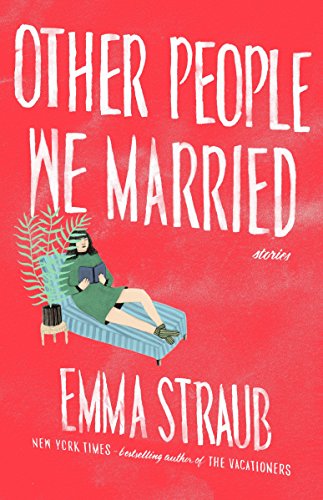 First, some simple truths: Emma Straub is the real deal: a writer whose gift it is to take the ordinary and, through the selection of perfectly telling details and sublime and sometimes brutal observations (“Sometimes it was best to let people believe what they want to about themselves, especially Franny, who was held together with barbed wire and a thick coating of cream-cheese frosting.”) transforms her material into the extraordinary.

Also, that Ms. Straub, who, in the jacket copy of her collection of short stories, Other People We Married, is compared with both Ann Beattie and Lorrie Moore, is actually cheated by the comparison, as hers is a voice unique from even these, even if the geography of her stories compares with that of the others, the I-95 corridor that links our nation’s capitol with Boston, with New York city the epicenter, the navel that oh, so many writers, old and new, spend so very much time gazing at.

If Ms. Straub has, in her fiction, some echoes of Beattie—a bit of the same Greenwich-or-die attitude does crop up from time to time—and some of Moore’s tendency toward melodrama, when a simpler, more truthful drama would surely do, Ms. Straub’s stories are her own, as is her eye, her voice, and her velvety narrative touch.

For instance, from the story, “Pearls,” which introduces two young characters, seaside for a visit, and the dynamics of their relationship:

“Jackie’s whole body was taut and boring, a straight line, and Franny’s was wiggly. Everyone they passed on the street turned to look at her, and Jackie couldn’t blame them. Franny moved her bottom from side to side with every step, like she was Fred Astaire dancing with an invisible Ginger Rogers, always pushing her backwards in those heels.

“‘You will come in the ocean, won’t you?” Jackie asked.

“‘Will you save me if I drown?” Franny replied.

With the full-throttle of youth so clearly on the page, the two explore, not just the depth of the ocean, but also of each other, with a single kiss:

“Jackie could feel Franny’s mouth in all different parts of her body: her ribcage, where it was vibrating against her chest, and in her underwear, twitching like someone had flipped a switch. Jackie slipped her tongue past Franny’s lips and teeth, and there was a shudder somewhere inside her that she could feel.”

What leads up to the kiss and away from it afterward are the heart of this pitch-perfect story, told as if filmed, in swooning close-ups and quick cutaways.

Indeed, there is a Technicolor quality to all the stories collected here, both those that are fully rounded, expressive, even explosive, like the titular story, “Other People We Married,” and those that seem to still be MFA projects waiting further readers’ comments and the all-important grade.

To aptly describe Ms. Straub at her best, the reader must dig deep into his adjective trove and settle upon a word once used perhaps for the likes of Saki or Colette—piquant. For there are tales here that excite the mind as spices do the tongue.

Consider the tang of the language in her best story, “Fly-Over State,” in which Ms. Straub takes a standard fish-out-of-water tale—in this case, a young academic and his wife move to Wisconsin, so he can take a job teaching at a second-rate school and she can founder in the American heartland—and mines it for both humor and (that which is chief perhaps among the topics that drive her in her writing) self discovery:

“I never imagined we’d actually leave New York. I had a part-time job, and friends, and neighbors whose names I didn’t know. We were settled. There were never any boxes in my daydreams.

“When I finally told my mother the truth about where we were going, she gasped and said, ‘A fly-over state?’

“My mother lived in Greenwich, Connecticut, for fifty of her sixty-five years. The intervening years—college in neighboring Massachusetts, an early marriage in California—were looked upon as a sad experiment, the kind where the potion turns purple instead of orange and hisses briefly, instead of bubbling dramatically to the top of the beaker.”

In the pages of these stories, inappropriate relationships abound, such as the one formed between the transplanted New Yorker and “Mud,” the misheard name of an alienated Wisconsin youth in an orange hunter’s hat:

“‘So, you’re from New York?’
“I nodded.
“‘What was it like?’ Mud walked behind me, and ran his finger across his rows of books. ‘Was it like in the movies?’”

Other stories tell other tales, most often of New Yorkers on the run, on vacation, or transplanted, misunderstanding and misunderstood. Alienation itself is another theme and yearning abounds. Wives yearn for husbands who understand, girls yearn for lives lived far, far away, and single women yearn for impossible, angelic youths, while survivors yearn for those who have died—they take familiar vacations with new mates, hoping to rekindle a lost feeling of warmth.

Through the dozen stories told within the binding of this book, Ms. Straub takes her readers many places, shows them the full range of emotional color, tone and hue through the peculiar prestidigitation of her words. To return again to a simple truth, Emma Straub reminds the reader of the particular joy of discovering the terra incognita of a story well told, of characters well-wrought, and of a meaningful denouement—things all too often missing in this modern age of the oblique.

May this be only the first such collection from Emma Straub—and may hers be the success that her oversized talent deserves.